Good morning. Welcome to the weekend.

The University appears to have experienced water issues at several campus locations due to problems with fire sprinklers and pipe bursts as a result of the extreme cold weather. Incidents were reported at Cathey Dining Hall (which was temporarily closed Thursday), Eckhardt Research Center, the Kersten Physics Teaching Center, an office-area at the Billings Hospital building, and a UChicago office building at 6054 South Drexel Avenue. 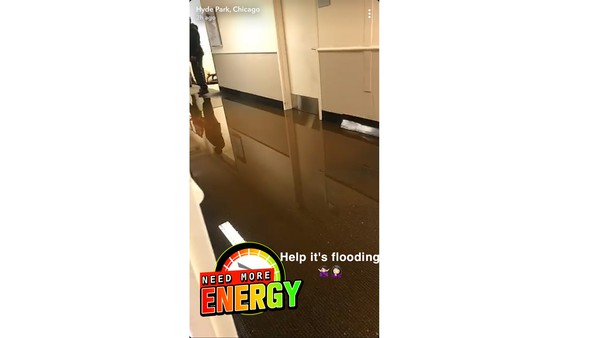 A video of flooding at the Billings Hospital building was posted to Snapchat.

— A UChicago spokesperson downplayed the incidents, saying they were anticipated. “With this week’s extreme temperatures, we anticipated that there would be some instances of burst pipes on campus, causing temporary water leaks in those locations. All incidents reported to facilities were immediately addressed with minimal disruptions to normal operations.”

— A Chicago Fire Department spokesperson told The Maroon: “CFD has responded to many such incidents across the city in private and public buildings. The systems that have failed and caused water issues appear not to be able to handle the near record temperatures seen in the city over that past few days. The situation is widespread and appears to be a side effect of outside temperatures below those expected when the systems were designed and installed. Each year in colder weather we see a few such cases. This spat is unprecedented.”

— A UChicago Medicine spokesperson said the water in an office space on the second floor of Billings hospital would be cleaned up by Monday when employees return to work. “There’s little to no damage, but they’re working to soak up the water and clean up from the incident... We were prepared for the possibility of broken and cracked pipes, especially smaller pipes near exterior walls. We’ve been asking our staff to be on the lookout for any issues, which helped us respond quickly.”

Eighty-four faculty and staff members sent a letter to administrators asking the University to investigate the firing of Lab Schools teacher Daniel Bobo-Jones, according to U-High Midway, the student newspaper of the Lab Schools. The teacher said he was discriminated against for being gay when the school principal scrutinized his text conversation with a student; the director claims Bobo-Jones was fired for falsifying a grade and for violating FERPA. The letter asks the University to step in due to the school’s lack of transparency regarding the termination.

— Linguistics professor Chris Kennedy, who has two sons enrolled in the Lab Schools and helped draft the letter, told The Maroon that the lack of clear explanation for Bobo-Jones’s termination “undermines the kind of commitment that we normally have to communication, to explanation, to justification of ideas and decisions that make an academic community.”

— A University spokesperson did not answer when asked whether the University would investigate the termination.

Miguel Civil, a UChicago professor and one of the world’s leading experts on the ancient Mesopotamian language Sumerian, passed away on January 13 at the University of Chicago Hospital. He was 92. A memorial for Civil will be held in Bond Chapel on March 18 at 4 p.m.

Play The Maroon’s Crossword online on the beta launch of our new crossword site. This week’s 15x15 crossword is titled “Blizzard.”

Watch: The video team explores the history of integrating student housing on campus in the late 19th and early 20th centuries.

$1 million: The Renaissance Society, a contemporary art museum on campus, received its largest gift ever from Joe Mansueto, the founder of Morningstar, and his wife Rika. The Mansuetos are also the namesakes of the University’s Mansueto Library.

Booth professor Ayelet Fishbach co-published a paper showing that sharing a meal increases the likelihood that potential business partners cooperate on a deal.

This week on Quadcast: University Theater. Learn all about one of the largest RSOs on campus, involved in everything from Shakespearean theater to Off-Off Campus improv.

Bored, stuck inside? No worries the latest episode of our Dear Abby podcast is here.

Though James McAvoy delivered a commendable performance in Glass, M. Night Shyamalan’s over-dedication to plot twists did not do justice to the characters developed in previous films.

Ranging from puppet caricatures of Noam Chomsky to the performed hallucinations of a famed Andy Warhol assailant, the festival entertained, disturbed, and awed viewers.

“Beautiful Soul” singer Jesse McCartney performed at the House of Blues after a four-year musical hiatus.