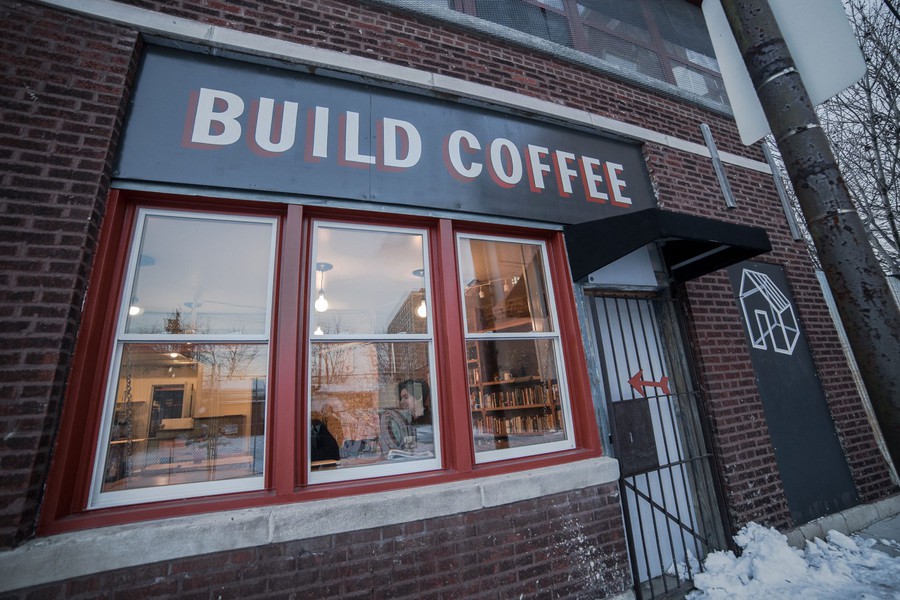 Located on 61st Street and Blackstone Avenue in the Experimental Station, right between the Hyde Park and Woodlawn communities, Build Coffee serves as a center of community-based cultural enrichment and collaboration. Described by its cofounder Hannah Nyhart as “a home/haven/hotbed for a broad constituency, anchored by our immediate community,” the bustling coffee shop–bookstore hybrid has always featured visual art, zines, journals, and small press publications from local artists, providing them a platform to help their artwork reach dozens of people every day. In recent months, Build Coffee has taken more direct steps to support local artists and advocate for a communal appreciation for their works by establishing its new meal-based residency program.

Selected artists get their art featured in the shop’s gallery for three months, in addition to receiving a free drink and meal from Build Coffee’s menu three days a week during their residency period. When asked about the goal of the new residency program, Build Coffee booker Bea Malsky responded: “When we’re considering new programming at Build, there are four things we’re specifically looking for: strengthening [the] existing community, redistributing resources, creating a more informed and empowered public, and bringing new faces into the shop. For the meal-based residency program we were thinking along those lines, but also about ways we think the art world fails most artists through its financial inaccessibility and exclusivity.” This program aims to support local artists not only on a promotional level, but on a material level as well, which is an admirable goal for a relatively small coffee shop. By confronting and working to reverse the acceptability of the “starving artist” stereotype, Build Coffee backs up its claim that it cares deeply about strengthening the community by helping local artists share their art.

Upon entering the bustling coffee shop, visitors are immediately confronted by the work of Monica Trinidad, the meal-based residency program’s inaugural artist. The gallery features a spread of watercolors depicting brightly colored scenes of the battle against racial prejudice, emblazoned with slogans such as “Celebrate People’s History, Reparations Now, Reparations Won!” and “Defend Black Girls Now” from her new show, Hope is a Discipline. A short zine is hung beneath each painting, containing information about the social movement each one depicted.

A queer Latinx artist and organizer, Trinidad is a self-described “community-taught artist,” which makes her the perfect candidate for the program. Her art is in the permanent collection at the DuSable Museum and has been featured in the National Museum of Mexican Art. The co-founder of the For the People Artists Collective and a regular contributor of artwork to racial justice campaigns in the city like We Charge Genocide and #NoCopAcademy, Trinidad is a community-based artist in the truest sense. It is no wonder why Malsky, who described Trinidad as “a force to be reckoned with in Chicago radical organizing” and as someone who “makes an incredible amount of things happen in Chicago,” chose her for the residency.

The meal-based residency program shows how serious Build Coffee is about its role as a place for cultural enrichment and collaboration. Located in the Experimental Station and sharing a space with other community-based institutions like Blackstone Bikes, South Side Weekly, and the 61st Street Farmers Market, it is easy to see where the ethos of the shop comes from. By not only promoting, but also literally feeding local artists, Build Coffee is taking matters into its own hands to promote South-Side culture. Build Coffee is an inspiration to both organizations and individuals alike, as it takes on a more active role in supporting local artistry.