By Elaine Chen    and Caroline Kubzansky 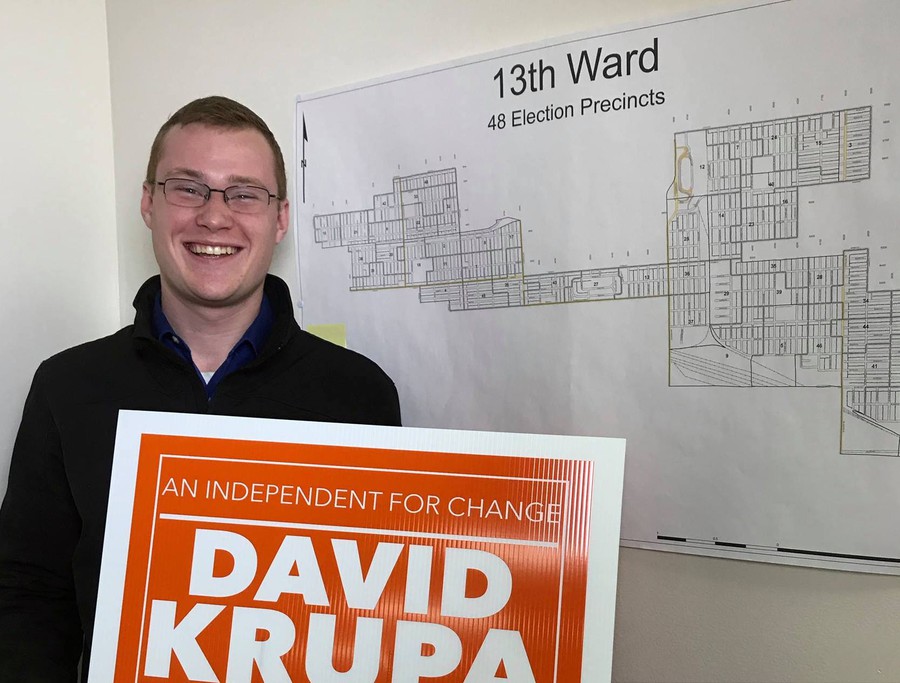 Krupa is a freshman at DePaul University.

13th Ward aldermanic candidate David Krupa confirmed an allegation of sexual abuse when speaking to the president of College Republicans, the president said in a statement published in an article in The Gate Thursday.

Fourth-year Brett Barbin said that Krupa, a freshman at DePaul University who has garnered media attention including a Chicago Tribune editorial board endorsement, told him over the phone that he took off his condom when having sex with his high school ex-girlfriend without her consent—an allegation made in an emergency restraining order filed against Krupa in 2017.

Krupa also told Barbin in the call that he believed a judge extending the order until it went to trial was not on his side because the judge was female, Barbin said in the statement

Krupa’s campaign did not respond to multiple requests for comment by the time of publication.

The Gate article published Thursday said that when reached for comment by The Gate, Krupa denied Barbin’s claims, saying Barbin “must have misunderstood something that I said.”

The call took place two weeks ago, shortly after College Republicans disinvited Krupa from speaking on campus after Barbin looked into the restraining order. Krupa called Barbin to return a voicemail that Barbin left regarding the College Republicans’ disinvitation, according to Barbin’s statement.

The emergency order of protection, filed by the father of Krupa’s ex-girlfriend, Juliet Schmidt, makes additional allegations outlining a pattern of abuse by Krupa. The order said that Krupa was “controlling” and had engaged in stalking behavior, including appearing uninvited outside her window and trying to coerce her into a car with him up until a police officer intervened.

Barbin said in the statement that shortly after rescinding Krupa’s invitation to speak on campus, he “had a phone conversation with David Krupa…that voters should know about as they head to the polls,” and that the conversation “completely eroded [Barbin’s] opinion of Mr. Krupa’s character.

According to the statement, Krupa said on the phone that early in his relationship with Schmidt,  he did not wear a condom, but she began asking him to use a condom later on. When Barbin asked Krupa if he ever took his condom off without Schmidt's consent at that point in their relationship, “[Krupa] confirmed this,” Barbin said in the statement.

Over e-mail to The Maroon, Barbin elaborated that in the call, “[Krupa] questioned why it mattered that he wasn't using a condom at the end of the relationship because his ex-girlfriend didn't have an issue with unprotected sex at the beginning of the relationship.” Barbin added that he “interpreted [Krupa’s] tone to be flippant.”

Barbin also said in the statement that Krupa said one of the judges named in court documents “was never going to side with him because she was female,” adding that Krupa said he “wished he had had a white, male judge who had faced these kinds of allegations in the past, stating that then he would have been fine.”

In December, CBS Chicago conducted an interview with Krupa asking about the restraining order. Krupa denied the claims made in the order, saying that the allegations “were proven to be false and the judge vacated the order.” In a phone interview with The Maroon after Krupa’s disinvitation from campus and prior to Barbin’s statement to The Gate, Michael Schmidt, the ex-girlfriend’s father, refuted Krupa’s claims in the CBS interview, saying that the order was vacated per his daughter’s request.

“Juliet did not want to stand in court. We decided to walk away...the case was dismissed per the plaintiff’s request,” he said.

The father also refuted Krupa’s claim in the CBS interview that he filed the order without his daughter’s consent. He said that after receiving advice from the school social worker and a police officer, and with his daughter’s agreement, he and his wife decided to file the court restraining order.

The article was updated after publication with additional details from The Gate’s reporting.