Track and Field Flies High and Fast at UAA Championships 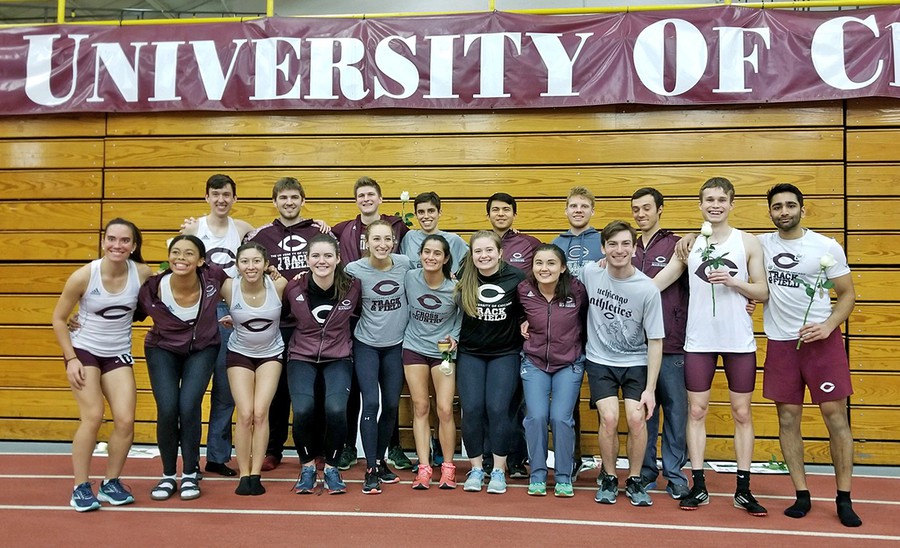 The track and field seniors celebrate the end of their last season.

The University of Chicago’s track and field teams captured seven event titles and 20 individual top-three finishes at the UAA Championships in Waltham, Massachusetts, this weekend, en route to top-three finishes for both the men’s and women’s squads.

First-place performers on the women’s team included first-year Isabel Maletich in the Long Jump (5.62 meters), third-year Claire Brockway in the 5,000-meter (17:41.41), first-year Kaitlyn Van Baalen in the 800-meter (2:16.21), and third-year Laura Darcey in the high jump (1.68 meters). The Maroons women’s 4x400 team of first-years Meg Fitzpatrick and Kaela Jolibois, third-year Mary Martin and fourth-year Emma Koether also came away with the crown, outpacing Wash U by two seconds to conclude the weekend’s running events. In a remarkable showing, the women finished with 155 points on the weekend, good enough for second overall behind No. 1 Wash U.

On the men’s side, the Maroons were paced by third-year Alexander Scott in the weight throw (16.25 meters) and second-year Ryan Cutter in the 3,000-meter (8:25.89), both capturing event titles. Cutter was also the runner-up in the 5,000-meter on Saturday, adding to his hardware on the weekend. The men’s 4x400 team of first-year Dillon O’Loughlin, third-years Tyson Miller and Elliot Paintsil, and fourth-year Ben Chaimberg closed the weekend on a high note for the Maroons, garnering a third-place finish in the final event. The strong showing tallied 98 points over the weekend, securing a third-place finish for the men’s team behind runner-up Wash U and UAA Champion Carnegie Mellon.

Asked about the team’s effort this weekend, third-year Elliott Paintsil said, “I felt as if both the men and the women competed at a very high level this weekend and left everything out there on the track, runway, and thrower’s circle. It was really awesome to see everyone get around and cheer each other on, especially because there are some events you don’t get the time to watch during regular season meets, which I think only adds to the amazing performances from Saturday and Sunday.” With respect to this weekend’s qualifier, Paintsil added, “Looking forward to this weekend, we have a couple of people that are right on the bubble for qualifying for the national meet or are on the outside looking in. So, I feel as a team, the overall goal is to get as many people as possible into the national meet. This is a very special group we have right now and I think with all the work we’ve been putting in since October we can definitely make some moves this weekend.”

The Maroons travel to Wartburg and Carthage this weekend for their final qualifiers of the indoor season. The meet at Carthage kicks off Friday at 3 p.m.