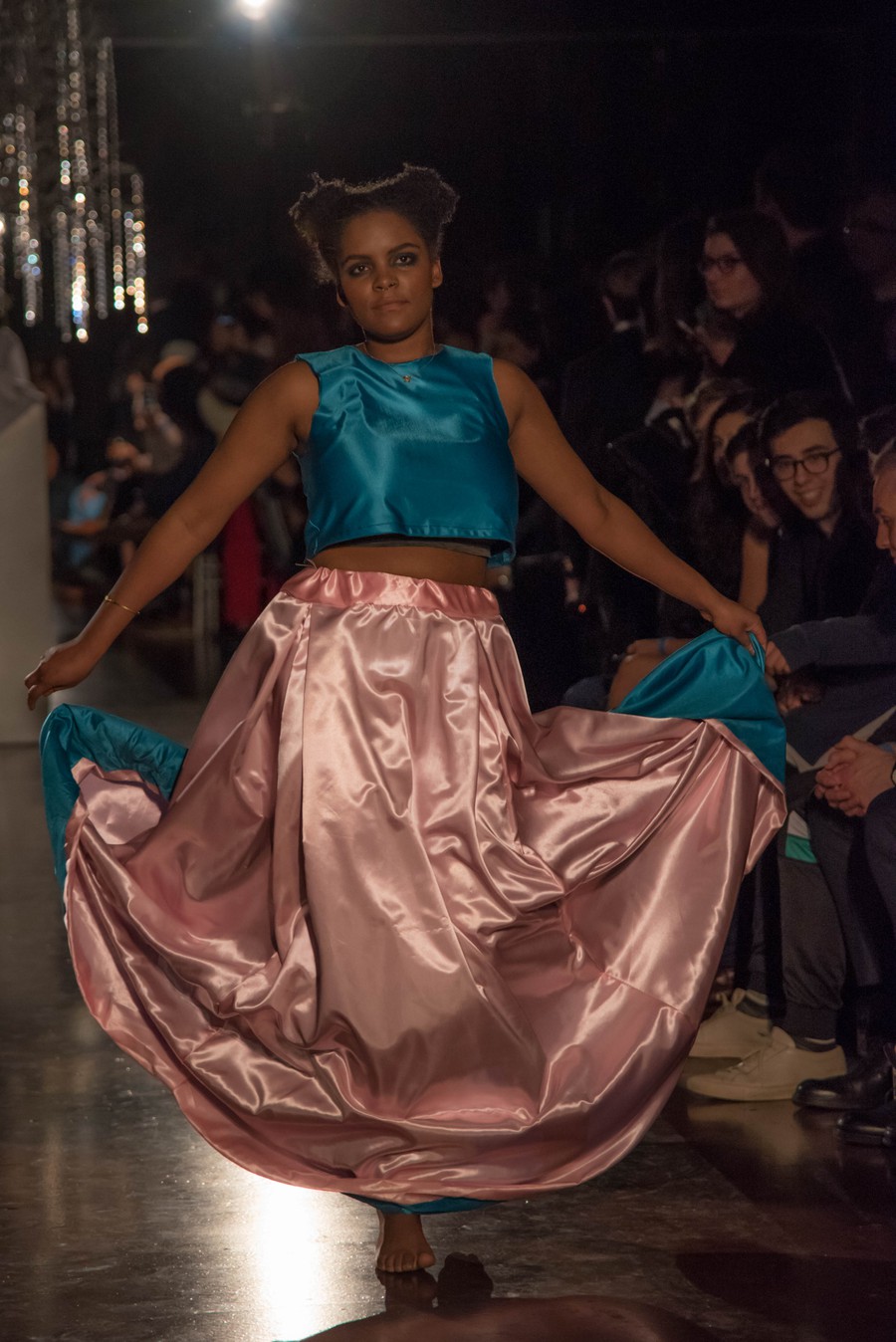 Atelier MODA, the University of Chicago’s annual fashion show, took place on Friday evening. The show featured the clothing designs of 20 students from all years and included a performance by campus dance troupe UChicago Maya. Find the full photo essay from the event here.

The event was held at Theater on the Lake, a restored 1920s-era building by Lake Michigan. Last year’s venue, The Geraghty, was an industrial space with concrete floors, exposed steel ceiling bars, and incongruously elaborate bathrooms. In contrast to The Geraghty, which felt almost too big—with a raised runway in the center of a vast and otherwise empty room—the Theater on the Lake provided a much more coherent setting to this year’s show. There was a bar and seating area at one end of the room, which offered guests a definitive space to congregate before the show began.

This year’s runway was level with the ground, and ran almost the length of the room. The floor-level runway allowed for the audience to appreciate the designs in detail, being able to observe things like makeup and jewelry, as well as the pieces as a whole. It also heightened the dynamism and drama of the performances by placing the audience in line with—almost in the middle of—the action. However, this blurred line was complicated by the standing audience spots, which made for a messy blend of the audience and the acts. The runway was split by a chandelier-tree hybrid, hung with strands of crystals; UChicago Maya’s glittering diamante crop tops fit in well as they gave a performance that was strikingly energetic for such a narrow space.

The designs and models that followed exhibited not only the creativity but also the technical skill of the various designers in the show. The variety of textures and colors brimmed with each outfit. Louis Levin’s sleek silk designs were given an edge with chainmail and metal piping. This effect was increased by the raw edges of the silk. Pule Nkopane’s white shirt and trouser combinations were particularly striking in terms of the contrast between sheer gauze shirt and opaque white trousers. Nkopane also questioned subtly-gendered fashion by dressing his male model with high waisted trousers and a cropped open jacket.

Vivian Liu and Michael Zhu both used Japanese-inspired floral patterns in their creations: Liu played on the half-length sleeve style of a kimono, while Zhu experimented with a stylistically modern use of the patterns in his cropped puff-sleeve shirt. Unlike the other groups of designs, which could be tied together through unifying material or stylistic elements, Zhu’s designs varied hugely, and even included a relatively faithful rendition of a track and field uniform, complete with competitor number.

Designs with more experimental elements included Andrew Chang’s outlandish leather shoulder pads, with safety pins dangling from the edges, as well as a short black dress designed by Caroline Mejia which, upon releasing the strings holding up the folds of material, was transformed into another, much longer dress with a gold silk skirt. Although this was compelling, the dress arguably had greater appeal in its shorter form with its weight and hoop-like structure.

Sophie Harding-Jackson’s designs also exhibited a range of materials, but the pieces could all be connected by an impressive use of ruching. There was a dress of red and cream gauze, sewn onto a creamy pink base, which achieved a very intestinal effect. The gauze hung off the puffy base, adding to its shapelessness, but structural clarity was maintained by the sharp definition of the neckline. Harding-Jackson’s pinstriped trousers exhibited similarly ruched knees, which lent a visual of soft folds to trousers that are traditionally sharply creased.

In addition to giving students who may not be visual arts majors an outside opportunity to learn how to make clothes they may have been imagining for several years, MODA also showcases the exciting side of UChicago street style, be it ironic or not. Some of this year’s selection of audience outfits included a combination of clashing floral patterns, pink satin shoes paired with bright blue lipstick, and a good amount of patent leather. Faux fur, bucket hats, and fanny packs were also present. The way in which Atelier MODA brings this “wear what you want” sentiment to the surface is both important and rare at this university.