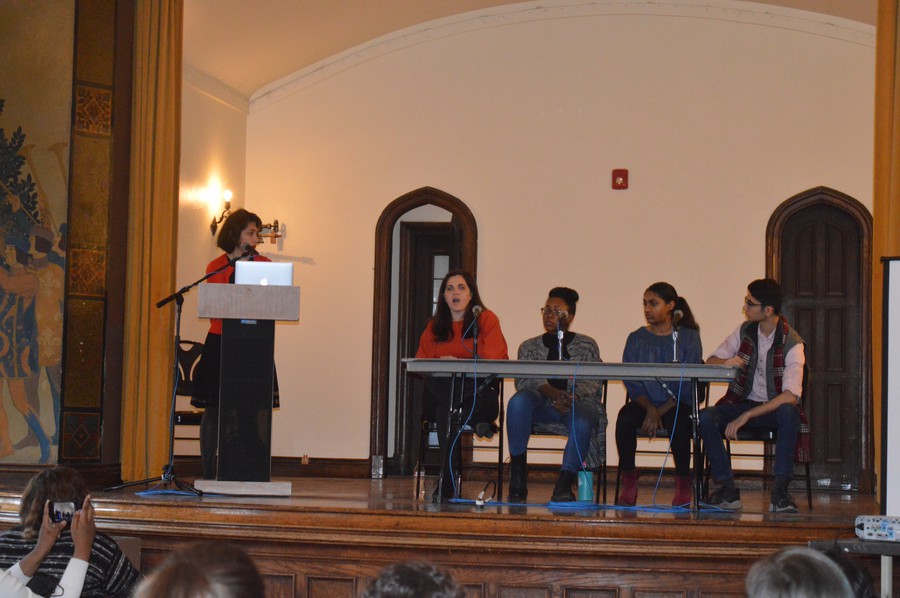 A panel of students and alumni discussed the University's Title IX policy.

The Phoenix Survivors Alliance (PSA) invited five students and alumni to reflect on their own experiences with Title IX activism at a symposium on the history of Title IX at UChicago this Saturday.

Panelist Olivia Ortiz (A.B. ’16), a co-founder of PSA, began the event by giving a presentation on Secretary of Education Betsy Devos’s new Title IX rules. She explained what the changes were and how they could affect college students.

According to Ortiz, although Title IX enforcement during the Obama era had its shortcomings, such as the slow rate of resolving complaints, Devos has made the process even more difficult for assault victims through her new Title IX changes. “[Devos] withdrew guidance that protected survivors and instead introduced a higher standard of proof,” Ortiz said.

Obama-era Title IX guidance required schools to use the lowest legal standard, “preponderance of the evidence,” when assessing allegations of sexual misconduct. However, the new guidance gives schools the option to use a higher standard of proof called “clear and convincing evidence.” In numerical terms, “preponderance of evidence” is described as a 50 percent likelihood, while the likelihood is raised to 75 percent to meet the standard of “clear and convincing evidence.”

When asked how a higher standard of proof would affect sexual assault victims at universities, Ortiz said that it depends on the state where the victims are living. “[The higher standard of proof] won’t affect students at UChicago,” said Ortiz, “because the Illinois Preventing Sexual Violence in Higher Education Act requires schools to use the preponderance of the evidence in sexual assault complaints. This proves how powerful state initiatives can be.”

Ortiz informed students of the federal and state options they have to exercise their rights under Title IX. According to Ortiz, any federal agency that provides funding for educational programs can enforce Title IX. “For example, if you are a physics major and your physics department receives funding from NASA,” Ortiz explained, “you can actually file your complaint at NASA.”

Other panelists emphasized the importance of building coalitions with underrepresented groups to resist the abridgment of Title IX rights. Malay Trivedi, a second-year student and Student Government vice president, said, “women, people of color, and LGBTQ+ people are disproportionately affected by sexual misconduct…. It is essential to get their voices in [discussions] on the issue.”

Asia Bowman, a third-year at the School of Social Service Administration and a member of the Provost’s Sexual Misconduct Advisory Board, echoed these sentiments. “You have to look around to see who is here and who is not here, and how can we involve [underrepresented groups] without tokenizing them,” she said.

“Sometimes the Title IX movement is very calculated in who is featured,” Ortiz said, “but we have to raise awareness that [Title IX] protects people in all sorts of educational programs, even the ones that are not palatable to the public eye.”

Title IX activism on campus is of paramount personal relevance to Ortiz. In 2013, she filed a complaint to the U.S. Department of Education’s Office of Civil Rights (OCR) on the claim that the University had mishandled disciplinary procedures after she was sexually assaulted. This led OCR to investigate the potential breach of Title IX regulations at the University.

Ortiz told The Maroon that, after five years of uncertainty, her complaint was finally resolved in the summer of 2018. In that time, Ortiz graduated from the University and started law school at the University of Washington. The pro bono legal assistance Ortiz received from the Chicago Alliance Against Sexual Exploitation inspired her decision to enroll in law school.

Reflecting on her personal experience with Title IX activism, Ortiz said, “Although the voices of many victims are unheard, [together] we can be loud and demanding, and say we deserve our rights.”