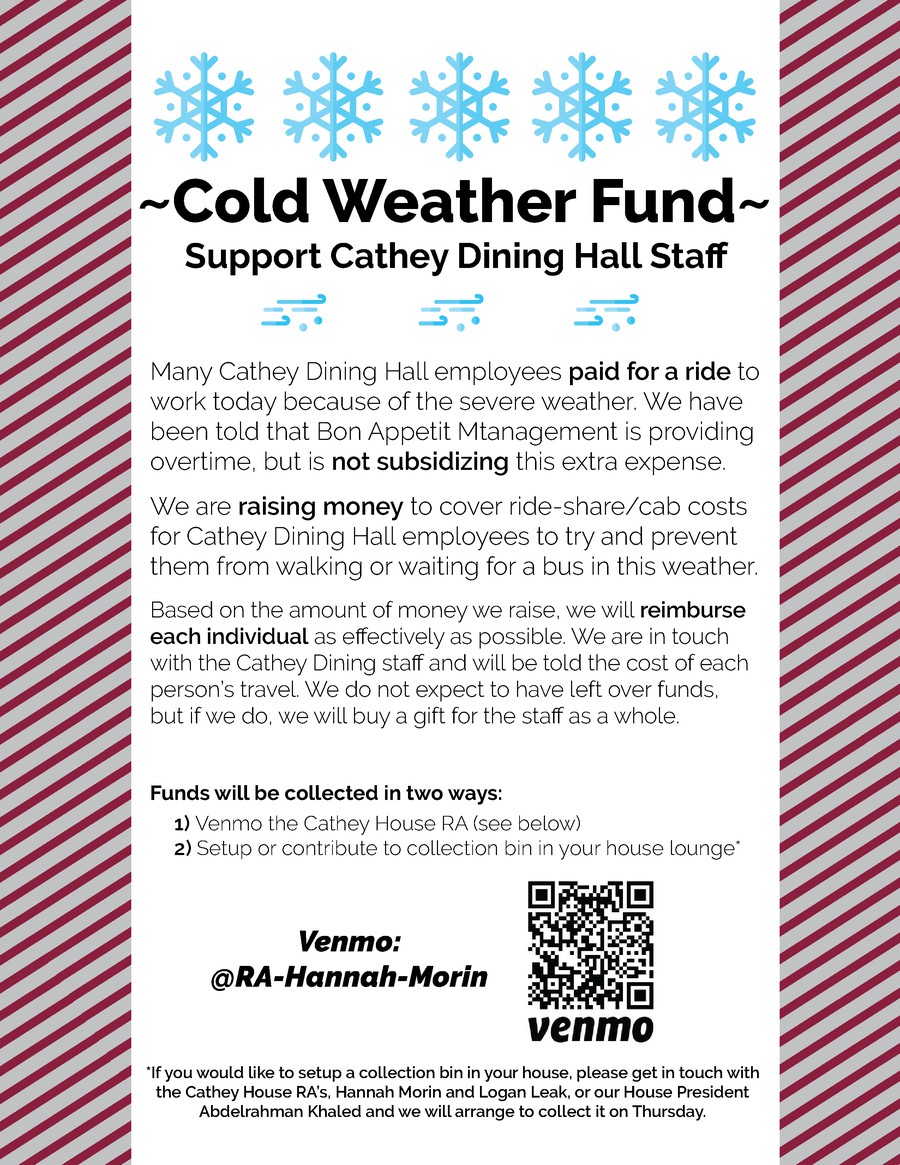 Updated 2/8/19, 11a.m.: On Thursday morning, after this article's publication, an event organizer sent The Maroon updated information on the amount raised in the Bartlett fundraiser, and some clarifications on CWF's logistics. The article has been updated to reflect those details.

A student-run fundraiser has raised over $2,000 to defray the cost of transportation for dining hall staff who had to pay for rides to get to campus on Wednesday the 30th and Thursday the 31st.

Students posted fundraisers for Cathey and Bartlett staff on Facebook on Wednesday, while a campaign for Baker staff went up on Thursday, as part of an initiative called the Cold Weather Fund (CWF). The initiative was created by four students from Cathey House: third-year Hannah Morin, an R.A. for Cathey; second-year Abdelrahman Abdo, Cathey House Council president; and second-years Jonathan Foldi and Alex Emerson.

“We are raising money to cover ride-share/cab costs for Cathey Dining Hall employees to try and prevent them from walking to/from work or waiting for a bus in this weather,” the organizers wrote in the initial fundraiser.

While many University services and activities did not operate on that Wednesday or that Thursday morning due to the dangerously low temperatures, all three campus dining commons remained open and staffed.

The CWF organizers had been considering making thank you cards for the dining staff, but decided to raise funds after hearing from staff members in Cathey that some of them were taking Ubers to get to and from the University during the days of the cold snap.

“We were thinking [dining staff] would be taking Ubers instead of waiting for public transportation, which would mean that they would stand [for] 15 minutes waiting for a bus, or just walking," Abdo told The Maroon.

On the night of Tuesday the 29th, the organizers contacted dining hall managers to inform them of the plan; on Wednesday, they went around to dining staff in Cathey Dining Commons to find out if they paid for rides, and if so, how much they paid. In the end, they decided that anyone who said they drove in themselves would be reimbursed $10, while anyone who took a rideshare or taxi would be fully reimbursed.

They also contacted students from houses in Campus North and Max Palevsky, who helped set up fundraisers for Baker and Bartlett. Donations were collected through Venmo and through donation boxes in the dorms.

“It had to be a straight donation; we were thinking about immediate subsidization, didn't have to make an event or plan something…. Then we went from there, it was just a matter of getting people on board, especially making sure it's legal, that we can get donations in such a direct way,” Abdo said.

The Maroon examined a spreadsheet of the Venmo payment data for CWF's Cathey and Baker fundraisers that were current as of the night of January 31st. The spreadsheet included the date, time, and amount paid. Donors’ names were redacted.

Donations ranged as low as one dollar to as high as $40; the average of the Venmo donations was $8.50. Some donors left virtual comments with their submissions supporting the initiative or bemoaning the rideshare situation.

The organizers said that at that point the fundraiser also collected $325 in cash, bringing the total to $1,677.25.

On Thursday, February 7, Foldi told The Maroon that the Bartlett fundraiser raised $915, and the complete amount donated through Venmo and cash donations for the entire CWF tallied to $2707.

Other universities in the region also raised funds for affected workers. A similar fundraiser at Northwestern University in Evanston raised over $2,500 for service staff who had to work during the cold weather.

The CWF Facebook events alleged that Bon Appetit, the food-service group that operates the dining halls and some campus cafés, did not reimburse dining staff who paid for rides to campus at their own expense.

However, organizers of the fundraiser emphasized to The Maroon by e-mail and Facebook message that they did not intend the fundraiser to shame Bon Appetit, and that they heard—after beginning the fundraiser—that Bon Appetit had paid four hours overtime to dining hall staff who came in on Wednesday and Thursday.

In a statement attributed to Bon Appetit that was passed along by a University spokesperson to The Maroon on Friday, the food-service group confirmed the payment of overtime but did not address the fundraiser. “We knew that the severe weather would be challenging for everyone personally, with unforeseen issues including transportation and childcare. That is why Bon Appetit offered a bonus of an extra four hours’ pay each day for any employee who was able to come to work.”

The organizers plan to begin by distributing cash reimbursements to dining staff in Cathey and Baker, Foldi told The Maroon via Facebook message. Organizers are still trying to determine how much needs to be reimbursed for Bartlett staff.

Leftover funds will be used to purchase gifts for the residential commons’ front desks, as a token of gratitude for Housing staff members who also had to come in during the cold days.