CR members said that leadership knew of the allegations when they first invited him, but withdrew the invitation after receiving messages and looking into court documents. 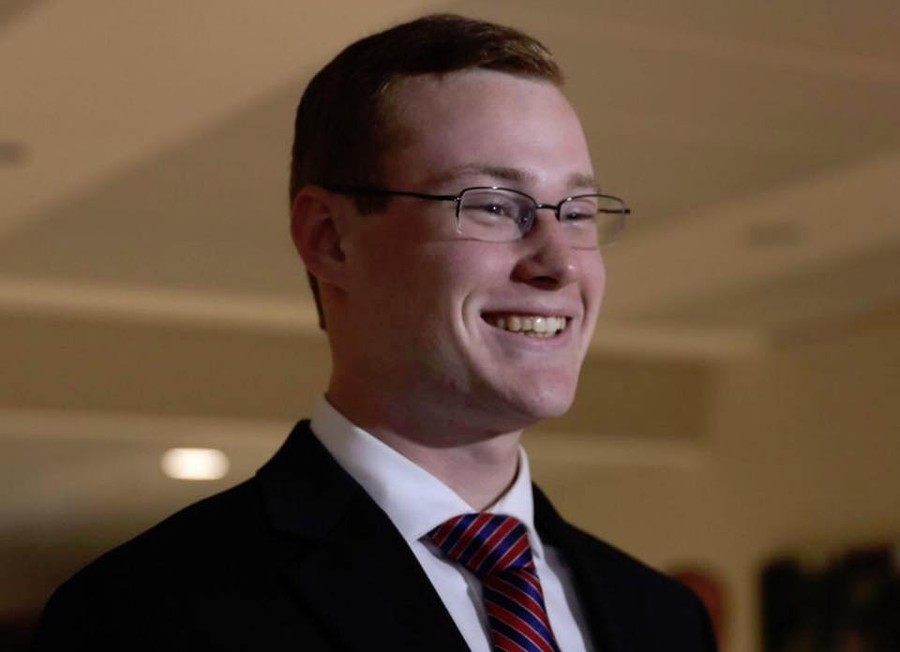 Krupa, a 19-year-old DePaul freshman, was accused by his former girlfriend of sexual assault.

Krupa has made headlines as “the college kid” bucking the Chicago political machine. The Chicago Tribune endorsed Krupa for alderman over incumbent Marty Quinn this week. The restraining order and no-contact directive against him are not widely reported on.

We strongly support the letter Dean Ellison sent to the incoming Class of 2020. pic.twitter.com/CK6RrWnseR

In June 2017, Krupa’s former high school girlfriend Juliet Schmidt filed a domestic violence complaint against Krupa, currently a freshman at DePaul University. Ms. Schmidt’s restraining order against Krupa references physical abuse, harassment, interference with personal liberty, intimidation of a dependent, exploitation, and stalking. Schmidt was granted an emergency order of protection; however, this has expired because a judge never ruled on the case, according to Politico, the only mainstream publication that has reported on the allegations.

The restraining order details how Krupa called Schmidt’s friends “liberal faggots,” appeared uninvited outside her window, told her she was mentally unstable, and tried to coerce her into a car with him, only stopping when a police officer intervened.

Politico also reported that Jan Muir, a middle school teacher in the 13th ward, accused Krupa of “cyberstalking and cyberbullying” in a letter to residents, which Krupa has denied through his attorney.

The day before Krupa was supposed to arrive, third-year Andy Hatem messaged the College Republicans Facebook page informing them of the allegations against Krupa, according to Pinna.

Hatem first learned of the allegations against Krupa through Politico's reporting two months ago and recalled the piece when the CR Facebook event appeared on his news feed.

“[The Politico] story wasn’t a story that got a huge amount of attention around here, [but] I didn’t particularly want somebody like that on campus,” Hatem said. “For the safety of students, it’s better not to have people like that on campus.”

“[Hatem] was like, ‘Hey, this guy has had some allegations against him,’ and we were like ‘What?’ and then Brett [CR president] found the actual court reports and oh, yeah, he did some bad stuff.” Pinna said.

While CR’s decision to disinvite Krupa followed shortly after Hatem messaged them, CR leadership was aware of the allegations against Krupa when CR first invited him, a CR member who asked not to be named told The Maroon. The member added that Hatem’s message prompted CR leadership to look further into the allegations and decide to ultimately rescind the invitation.

Pinna confirmed this in the meeting. He said that after looking into the restraining order against Krupa, the group no longer felt he would be informative as a guest, though they had been planning to focus their questions around the allegations against him.

“The allegations against him were made aware to us in a message to our page, and after looking into it we found the court documents from the case, and after our president had a phone call with the candidate, we didn’t feel confident that he would be able to answer our questions well, and we feared that he would not be able to provide a satisfactory answer to our questions [about his allegations], because we very much value the perspective of the woman who voiced those concerns, and that was going to be our number one pressing question to ask,” Pinna said.

The CR released a statement to Hatem regarding the disinvitation that read as follows:

“After reading more about the allegations against Mr. Krupa and consulting with the College Republicans Executive Board as well as our RSO adviser, we have decided to rescind David Krupa’s invitation to campus. Thank you for making us aware of these troubling allegations.”

Pressed further in the meeting by The Maroon on what particular concerns they had about hosting Krupa, Pinna said, “we felt if he didn’t want to give a satisfactory answer to the question, it just wouldn’t be good.”

“[It was] a problem of ethics,” added second-year member Michael Libanati.

“This isn’t about his beliefs, it has to do with his past actions,” first-year Holden Higgins said.

The decision took place within 24 hours of receiving Hatem’s message.

“We waited for all of our E-Board to weigh in on the situation and all agreed [on February 6] that he would not be invited down to our meeting,” said Pinna.