Newly Reelected Sophia King Looks Ahead to Next Four Years 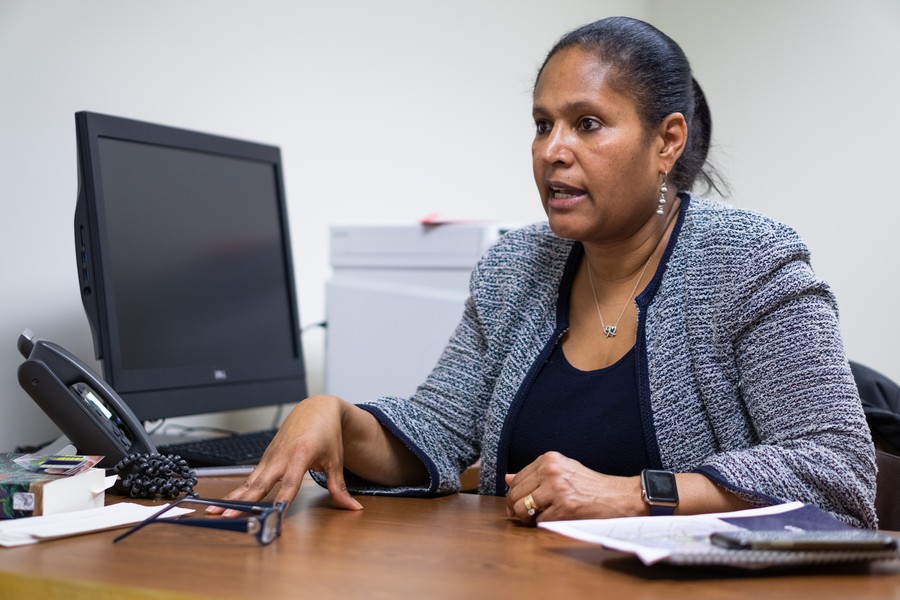 Sophia King was first appointed by Emanuel in 2016 and won a special election in 2017.

First appointed by mayor Rahm Emanuel among 18 applicants in 2016, King kept her position after winning a special election in 2017 on a platform of education, public safety, and economic development. Last month, she won in city elections against her sole challenger, attorney Ebony Lucas, by over 30 percentage points.

The Maroon sat down with King to discuss her goals for the next four years, and what she has accomplished in her last two and a half years as alderman.

“I am very humbled that my constituents have faith that what we’ve been doing has been something that the ward has needed,” King said.

When asking about her plans for the ward, Kings said that “some of the priorities that I spoke about in 2017 are still the same today. I can talk about what we’ve done and how we’re going forward in the same breath.”

In her time as alderman, King has spearheaded initiatives such as renaming Congress Parkway, a major street in the South Loop, to Ida B. Wells Drive after the African-American female journalist. She also pushed forward a mental health task force focused on expanding mental health services, which many have claimed were lacking after half of the city’s mental health clinics were shut down in 2012.

Upon mentioning these achievements, King directed the conversation to other initiatives she’s worked on, saying “I like to put [the above achievements] in perspective because I think we’ve done a lot in a short period of time,” she said, referring to her two and a half years in office.

Projects like 4400 Grove, a mixed-income housing complex, is spurring the 4th ward’s economic development, King said. 4400 Grove, which will ultimately have 84 combined apartments and 15,200 square feet of retail space, broke ground on February 20. King said the project has “80 percent minority participation and 65 percent African American participation, which is generally unheard of in the city.”

King said she’s also been championing projects for neighborhood schools within the ward out of her belief that “there is nothing that really drives economic development like a strong neighborhood school.” Renovations at the local Kenwood Academy High School make up one such project that King hopes will help Fourth Ward students succeed, “so that what’s on the outside will reflect what’s on the inside, which is great education and great students.”

King also discussed other topics that were hotly debated leading up to the February elections.

King currently supports aldermanic prerogative as a way to have say over these kinds of developments, recent scandals around the power notwithstanding. Aldermanic prerogative is an alderman’s unwritten power to have final say over zoning and development within their ward. She referenced her ability to reject plans for a casino in her ward, and stated that while she believed the recent scandals were a result of abuse of power, she didn’t see prerogative as the root issue.

“I as alderman represent the voice of the community, and if I’m doing my job well I understand [Fourth Ward residents] better than the mayor who has to think more globally,” she said. However, she said that she believes “there should be ordinances that are either changed or introduced that mitigate abuse of power, and that’s a different story.”

King spoke in a similar way when discussing tax increment financing (TIF) reform. TIF was implemented under Harold Washington in 1986 with the intention of “spur[ring] development in economically depressed and under-resourced areas.” According to King, the program has “not been used as [Washington] intended,” but she still believes that it should not be completely done away with.

Instead, King’s ideas on TIF reform focused on the shortcomings of distributing TIF funds. “You could have a TIF in an area that may spur more increment and right now you can only use that money back in that area. If you’ve got a TIF in downtown Chicago or near there and it spurs increment, then its used back in the area that doesn’t really need it.” She went on to suggest that instead the law could be changed “to say if you increased increment in an area that is not blighted then you could take that and move it somewhere else.”

King also takes a measured approach to recent proposals on the state level to legalize marijuana. While she supports its legalization and believes that it will bring good revenue to the community, she added, “I would definitely make sure that the incarceration around marijuana is looked at [if it were legalized].”

Referring to the April 2 mayoral election, which will be a runoff between candidates Toni Preckwinkle and Lori Lightfoot, King expressed strong support of the former. King is also optimistic about the direction that the city will take after the election, saying that she felt it was “a testament to the city that [it] overwhelmingly chose to pick two African-American women, one of whom will lead them.”