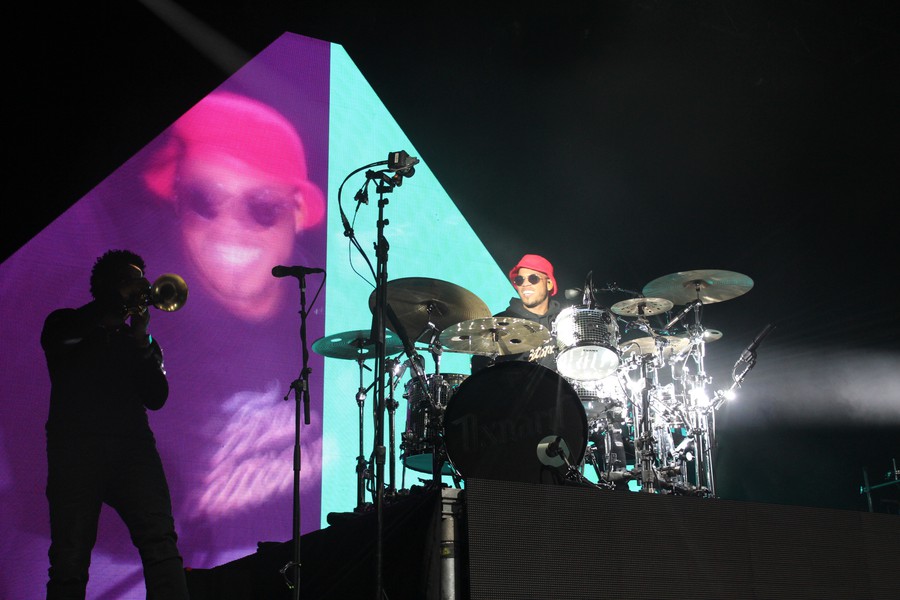 Anderson .Paak is riding a high. Weeks ago he won the Grammy for Best Rap Performance for his single “Bubblin.” In this careening, braggadocious track, .Paak’s arch, buttery delivery melts with lyrics like “Don’t I look like somebody that just be bodyin’ everything” to pay homage to self-indulgence. Two weeks ago, freshly Grammified and playing one of the first shows on his Andy’s Beach Club world tour, he definitely did look like someone “bodyin’ everything.”

Anderson .Paak is one of those artists who is undeniably the real deal. Vinyl-collecting beanie-wearers were swayed by his performance on NPR’s “Tiny Desk Concert” series; SB dunk–collecting old-heads can appreciate that Dr. Dre hired him to produce six songs off his 2015 album, Compton, under his old pseudonym Breezy Lovejoy. And anyone who has ever attempted to multitask will be blown away by his ability to sing and drum at the same time better than most people can sing or drum on their own, toothy grin never leaving his face, Kangol bucket hat never slipping.

You might also know him from his duo NxWorries with Knxwledge. On “Brother’s Keeper,” a track on Oxnard, featured rapper Pusha T calls them “one of the greatest duos in hip-hop history.” And if you’ve heard the opening, warbling “Hey” punctuated by the signature “Yes, Lawd!” on their biggest hit, “Suede,” you know Pusha T is right. In this song, .Paak and Knxwledge find ways to be so creative that you can’t help but smile: “Now most of y’all can’t do shit/ But all my chicks cook grits/ And roll a spliff, at the same damn time.” Performing this song on Saturday, perched atop his elevated drum set, .Paak grinned wide as the audience screamed “Yes, Lawd!” while the phrase flashed in bold, gothic letters on the screen behind him. His reach was never more tangible than in this moment.

Before he reached peak singing-while-drumming-while-grinning, .Paak came on stage solo to perform “Bubblin” and introduce his band, the Free Nationals (“I only play with the @freenationals,” his Instagram bio proclaims). During the time needed to perform the song and receive some love from the positively overflowing Riviera Theatre, he also managed to quickly pull out smooth freestyle moves and unbury himself from the sheer curtain that was dropped on top of him. A different performer might have been phased, but Anderson .Paak didn’t even flinch at this slight technical mishap, shrugging off the curtain and transitioning to his drum kit before the audience had time to register what had happened.

The timing of this show was serendipitous. .Paak has developed wide recognition, culminating in a new album released late 2018, Oxnard, with more high-profile features than usual, a Grammy, and now a sold-out tour. However, he hasn’t yet reached sold-out-arena heights, so this might have been the last time that fans could see him in a standing-room show at a mid-size venue like Riviera.

As the show progressed, everything people say about Anderson .Paak was confirmed. Yes, he can drum, dance, sing, rap. Yes, his new music is pretty good. Rather than attempt to sum up this show in my own words, though, I’ll leave you with a prophecy delivered by .Paak himself on his song “6 Summers”: “This shit gon’ bang for at least six summers.” Infectious, borderline absurd confidence is .Paak’s brand, and his ability to manifest all that smooth-talking into material success speaks for itself.