Victims say they are frustrated by the lack of security alert and a slow response from the University. 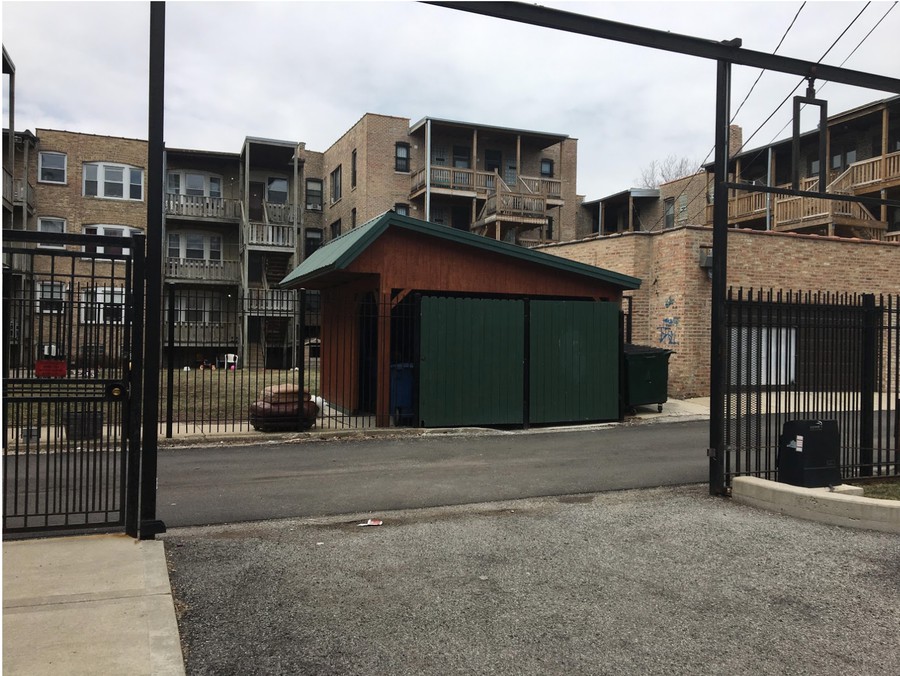 The gate through which an armed intruder entered in a recent home invasion.

Eleven apartment break ins have occurred in Hyde Park in the past month, including two in which residents were threatened by a man armed with a Taser, CPD data shows.

Graduate student Daphne Yu is one of the people whose home was invaded. She and her roommate Maggie Acosta, both graduate students in the Social Sciences Division (SSD), told The Maroon they were robbed by an armed intruder while at home on Saturday, March 30.

“Before I could fully figure out what was happening, he was already standing by me with the Taser,” Yu said. “He told me not to make any noise and to unlock my phone. Long story short, he basically took my iPad, my roommate’s laptop, and her wallet and keys.”

Yu and Acosta were the tenth Hyde Park household to be robbed in the past month, according to CPD data. An eleventh has occurred since.

According to the  Chicago Data Portal, a public crime database compiled by the City of Chicago, that includes crimes reported to both CPD and UCPD, eight burglaries occurred over a 10-day span, from March 13th to March 23rd. Three additional burglaries occurring on March 19th, March 30th, and April 6th are listed on the University of Chicago’s incident report, bringing the total number of burglaries to eleven over three-and-a-half weeks. As of April 12th, the University has not issued a security alert about this string of break ins.

In a statement to The Maroon, Sabrina Miller, a spokeswoman for the University of Chicago, contested this count of incidents. “So far this year, UCPD and CPD have received a total of two reports concerning home invasions in Hyde Park,” Miller said. “This is a category of felony offense in which an offender commits a residential burglary knowing that someone is at home, and in some cases interacts with or threatens the residents.”

According to publicly available records of criminal complaints, Campus Safety incident reports, and interviews with victims, most instances involve an intruder taking advantage of a readily-available access point—such as a broken gate or an unlocked window—often in the middle of the day.

In at least two cases, an intruder was armed with a Taser and threatened violence. It is currently unknown whether or not these cases are directly linked.

Information from the crime database shows there were 11 robberies throughout March 2019, compared to six break-ins in March 2018.

Several students targeted in burglaries feel that the University has been remiss in responding to these incidents, from failing to notify the University community of the recent wave in home invasions and robberies to adequately caring for victims.

Yu said she is frustrated with the University’s lack of communication regarding the issue.

“A lot of the people I’ve talked to have had no idea this is happening,” she said. “Knowing about it would have—and has—changed how they behaved.”

Miller, the University spokeswoman, stated, “UCPD has been in contact with the Chicago Police Department, the primary investigating agency, regarding these reports. Both agencies will work with the community to help prevent further offenses and help identify anyone engaging in this activity.” Miller also said that the recent string of burglaries does not represent an “uptick” in crime. “There has not been an “uptick” in robberies, though there have been some recent burglaries in the Hyde Park area,” she wrote.

Yu said she believes robberies often surge around spring break, and said she feels frustrated that no security alert has been sent.

“Moving forward, if you know that there is a peak in robberies around spring break, I feel like the campus, if they do care about student safety, should let the students know to be on high alert during that time. Whether or not the break-ins do happen, it’s a trend in past years. Let students know, be proactive rather than reactive,” Yu said.

Miller said that a University-wide crime alert was unwarranted, given the majority of break-ins occured off-campus.

“The University is committed to helping promote a safe environment on campus and in neighboring communities,” she wrote. “We provide information on crimes through multiple channels, including campus-wide security alerts, which are required by the Clery Act. The law requires a college or university to issue such alerts to its campus community when a specified crime occurs on or immediately adjacent to campus property and poses a serious or ongoing threat to the campus community. Crimes that occur off-campus normally do not prompt a campus-wide security alert.”

The Department of Safety and Security’s policy for issuing a security alert is available online.

After the robbery, Acosta and Yu said they contacted the dean-on-call and the SSD dean. While Acosta said the dean-on-call spoke to her promptly, she was frustrated by her experience with the SSD dean, who she said was unable to meet with her until three days after the robbery. “We went and talked to him, told him that we had pressing security concerns—the means by which the robber accessed the apartment still wasn’t fixed; the robber still had the keys to the entire apartment; and the robber had my car keys. He really couldn’t do anything for us on that front and suggested we go to counseling.”

The SSD dean referred Acosta and Yu to College Dean of Students Michelle Rasmussen, who met with them three days later. Acosta and Yu met with campus security in the interim, but Acosta said that, “when we met actually with Dean Rasmussen, there was a lack of genuine concern. There was a discussion of what policy allow, a discussion of ‘on-campus and near-campus.’ I don’t think she really saw that we were there for our own immediate security concerns.”

When asked for clarification, Miller stated that University policy mandated that “timely security alerts will be issued for all Clery Act crimes occurring in Clery Act geography, which are reported to Campus Security Authorities and considered to represent a continuing threat to the campus community”. A list of crimes named in the Clery Act include “aggravated assault, arson, burglary, dating violence, domestic violence, hate crimes, motor vehicle theft, murder and non-negligent manslaughter, negligent manslaughter, robbery, sex offenses (both forcible and non-forcible), and stalking”. The University defines Clery Act geography as “campus (including residence halls), non-campus buildings or property, and public property”. A map of what Safety and Security classifies as “on-campus” is available here.

On Friday night, Acosta said, the same person who committed the robbery attempted to steal her car. According to Acosta, “He came back to literally our location and was in front of our house again.” Though he managed to unlock the vehicle with the keys he stole earlier in the week, he was unable to operate the vehicle due to a club—a kind of steering wheel lock—that Acosta had installed immediately after the robbery.

“He took the car, tore off someone’s back bumper, wrecked it into at least two or three other cars because he can’t drive with the club, and just left it in front of a fire hydrant,” Acosta said. “The person whose car was most seriously damaged called CPD and filed a report, but CPD didn’t contact me. I had to call them again later to report my side. And when I called them, they had actually given me two parking tickets overnight—for being parked in front of a fire hydrant.”

She continued: “That was frustrating because we had been told that security would be on high alert... they’re telling me that UCPD is paying attention, but you didn’t notice this car wrecked, stolen, parked haphazardly on my street, on my block that you’re patrolling?”

Acosta does not feel that the University has sufficiently addressed her concern that the burglar may come back. “Even since then all I’ve gotten is really just silence,” she said. “I told the deans about [the burglar] coming back for my car and I’ve gotten no reaction, other than one of the deans suggesting he’ll pay for a parking ticket.”

Miller, the University spokesperson, said, “in cases where students contacted UCPD or the office of Campus and Student Life, those offices responded the same day and offered support; in various cases this included an emergency grant to defray the cost of stolen property, an offer of free temporary parking in a University parking garage, and a temporary replacement laptop.”

Victims were most frustrated with the fact that the University did not  to communicate the occurrence of the burglaries, both on-campus and off, to the University community, despite what they saw as a trend of eleven incidents over the span of half a month. Miller said  that, under University policy, a security alert is not called for. She pointed out that students, staff, and faculty members have access to two non-security alert notification resources—UCPD Crime Bulletin, produced daily, and Crime Notices, produced whenever they are necessary—that serve to alert community members to possible threats.

But Acosta doesn’t think that these resources are enough. “As far as what’s happening right now, I think we’re missing the window for a security alert. The sense of a current threat is going to pass. I think we need to be responding right now,” Acosta said.

Acosta and Yu are students in the Social Sciences Division (SSD), not the School of Social Service Administration (SSA), as the article previously stated.