For Your Consideration: “Hadestown,” Now On Broadway 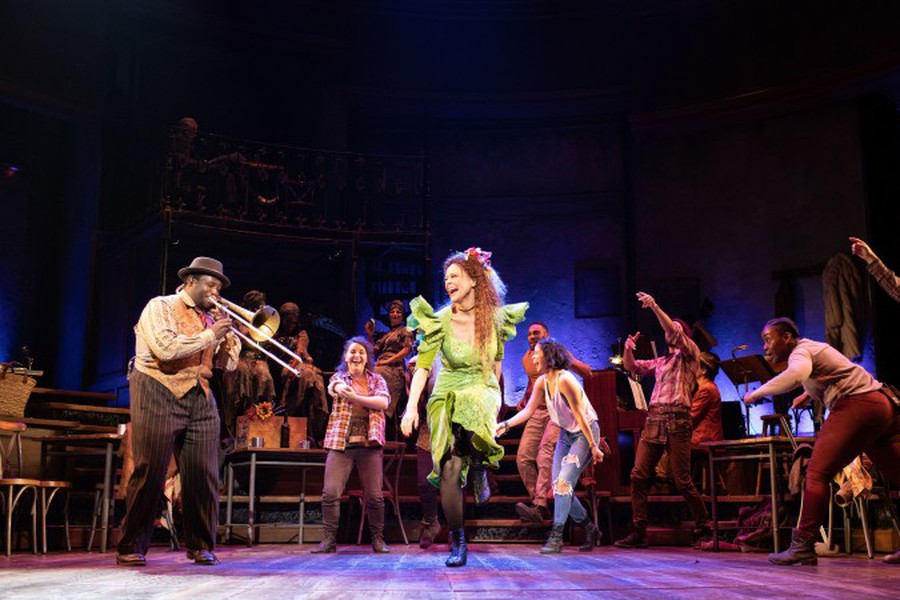 Nathaniel Cross and Amber Gray in "Hadestown," which recently opened on Broadway.

I’ll be honest. As much as I love theater, particularly musicals, it’s pretty rare for me to really fall in love with a show. Perhaps it’s the critical eye I’ve developed from working in theater, but the fact is, I’ve become a little picky with the musicals that make me “obsessed.”

So I don’t exaggerate when I say that the greatest show on Broadway right now is Hadestown.

Adapted from the Greek myth of Orpheus and Eurydice, Hadestown resets the well-known story in a Great Depression–inspired post-apocalyptic world, in which lovers Orpheus and Eurydice meet. Also present is Persephone, the queen of the underworld, and her estranged husband Hades, who cuts her stay on the surface short and, with it, the summer months. Way down under the ground, Hades controls the titular “Hadestown,” a factory city where workers spend eternity building an enormous wall which Hades insists will protect them all. When the long winter months and Orpheus’s preoccupation with composing his magnum opus prove too much for Eurydice, she makes a doomed deal with Hades to become a worker in Hadestown, which forces Orpheus on a quest to rescue her. The tale is narrated by Hermes and the Three Fates, who serve as the show’s Greek Chorus and occasionally get involved in the events as well.

Hadestown has been in development for over a decade. Its origins are in a 2006 Vermont folk opera written by folk singer Anaïs Mitchell, who later compiled the songs into her acclaimed 2010 concept album Hadestown, featuring Justin Vernon, Ani DiFranco, Greg Brown, Ben Knox Miller, and the Haden Triplets. The musical’s road to Broadway truly began in 2012 when Mitchell teamed up with Natasha, Pierre, and the Great Comet of 1812’s director Rachel Chavkin. The pair developed the musical over the next seven years, with a 2016 production at New York Theater Workshop introducing the show to the world (and to me), and further productions in 2017 at the Citadel Theatre in Edmonton and in 2018 at the National Theatre of London. With each production, Hadestown’s fan base grew as Chavkin and Mitchell worked tirelessly to improve upon the piece. And based on the Broadway show I saw, it seems that they have succeeded.

One of the factors that makes Hadestown such a strong show is its cast. Eva Noblezada’s Eurydice, hardened by the cruelty of the world, will do all she can to guarantee her survival—even sell her own soul. Reeve Carney, who first graced the Broadway stage with the doomed Spider-Man: Turn Off the Dark, brings a wide-eyed wonder and an edge to his voice that sell Orpheus as a young man lost in his music but driven by love, portrayed to perfection with “Wait for Me.” André De Shields brings a mischievous yet cool edge to Hermes, commanding the stage upon entrance and helping to guide the audience through a tragedy that he, like the rest of us, is powerless to change. Jewelle Blackman, Yvette Gonzalez-Nacer, and Kay Trinidad deliver shockingly entrancing harmonies as the Fates, leading some of the show’s best tunes, including “When the Chips Are Down.” The star performers, though, are Patrick Page and Amber Gray, who have played the king and queen of the underworld respectively since early workshops and have developed their characters further with every production. Gray commands the stage as Persephone, putting on a Tony-worthy performance that earned enthusiastic applause from the audience, particularly with “Our Lady of the Underground” (a number that also ensures the Hadestown orchestra gets its fair share of applause).

The production’s design elements equally contribute to the show’s quality. Rachel Hauck’s New Orleans-inspired set design begets a general feeling of community. Michael Krass’s costumes, especially his designs for Persephone and the Fates, emphasize power dynamics between the characters. The most impressive element is Bradley King’s lighting design, which at times elicited gasps and tears, especially in “Wait for Me,” the penultimate song of Act 1. King, whose designs for The Great Comet earned him one of the musical’s surprisingly few Tony Awards, has delivered something incredibly new and beautiful to the Broadway world.

But Hadestown's true power players are the pair at the helm, director Rachel Chavkin and writer Anaïs Mitchell. Mitchell’s music, which she continuously rewrote and reworked for 13 years, ingeniously draws from folk, jazz, bluegrass, and country genres to form a soundtrack unlike anything previously heard on Broadway. Her poetic writing makes the entire production feel like an epic tale as opposed to a conventional Broadway musical. As I’ve come to expect from Rachel Chavkin–directed shows, this is anything but a conventional Broadway musical. Following The Great Comet’s controversial closing in 2017, Hadestown feels very much like Chavkin’s response to the fate of her Broadway debut. Chavkin has clearly poured all her artistic energy into this production, proving that Comet was not a one-hit wonder and that she will not let its premature closure stop her from putting out the best product possible.

Key to what makes Hadestown a musical worth seeing is its relevance to current events. Despite much of the music and the story dating back to 2006, and the initial myth being much, much older than that, topics such as poverty, climate change, and continued references to building walls make Hadestown true to our times. The Act 1 finale “Why We Build The Wall” was written long before a certain political figure spouted much the same rhetoric, yet it is impossible not to draw connections: When I saw the musical I was sitting behind a group of middle-aged audience members who were very clearly shaking their heads throughout the entirety of the song and marched out of the theater in a huff at intermission. Hey, your loss—it’s a hot ticket.

My overall point: Hadestown is pretty much perfect. It is familiar, it is new, it is current, it is ancient, there is not a weak spot in the cast, its music is incredible, the direction and production elements are incredible…. It is extremely rare for a show like this to make such a strong landing. So, I encourage you to get familiar with this show: Listen to the 2010 album as well as the Off-Broadway live cast recording, and find a bootleg of one of the many productions. Because, like Hermes tells us at the top of the show, it’s an old song, and you’re gonna want to sing it again and again.

“Way down, Hadestown, way down under the ground…”