Chicago Gets Revenge Over Ripon in Routs

Hot bats, overpowering arms, and a one-hitter propel the Maroons to a doubleheader sweep and into playoff position. 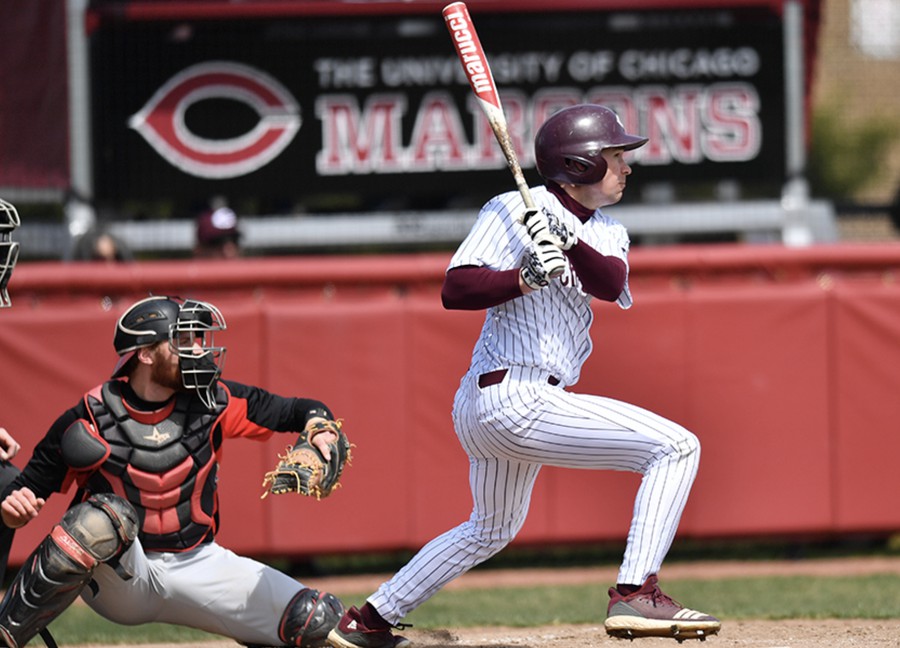 The University of Chicago baseball team showed great resilience in Saturday’s set of home games against the visiting Ripon Red Hawks, sweeping the doubleheader by scores of 11–5 and 10–0 and snapping Ripon’s eight-game winning streak. After two tightly-contested losses at Ripon on Friday, the Maroons bounced back to split the four-game season series with their divisional rival. Chicago now sits in second place in the Midwest Conference North Division at 6–2 (.750), with an overall record of 17–6 over the 2019 campaign.

Saturday afternoon’s first game started with two quick frames on the mound from first-year ace Sam Bennett, who struck out four of the seven batters he faced without allowing a hit. In the bottom of the second, Chicago gave Bennett the run support he deserved, as the Maroons rode a procession of five hits and two walks to an early 5–0 lead. Although Ripon battled back over the next two innings, Bennett relied on his commanding curveball to limit the damage, and fourth-year reliever (and winning pitcher) Joe Liberman successfully extricated the Maroons from the top of the fourth with a two-run advantage still intact. However, the game would not stay close for long, as the Maroons capitalized on a pivotal Ripon error in the bottom of the fifth to rally for three unearned runs with two outs. After first-year Carson Weekley reached base on a booted grounder, fourth-year Connor Hickey blasted a pitch over the right field fence for a two-run homer, one of his three hits in the game. A subsequent double by third-year Payton Jancsy—one of his three hits in the game—and an RBI single by second-year Brian Lyle restored the Maroons’ previous five-run lead. After a scoreless sixth, the Maroons broke away in the bottom of the seventh, adding three more runs on three hits and two more Red Hawks errors. Ripon’s comeback attempts were thwarted by two dominant innings from fourth-year Ravi Bakhai, as well as a hitless ninth inning from second-year Scott Rothschild, which sealed an 11–5 Chicago victory.

Maroon pitching was even more masterful in game two, as three Chicago arms combined to throw a one-hitter in the seventh-inning, score-shortened shutout. Third-year starting pitcher Nate Hendley was electric on the mound. With help from first-year batterymate Brett Riegler—who gunned down a runner at second base—Ripon never reached scoring position through the first two frames. With Ripon threatening in the third, second-year reliever Zach Morochnik took over and instantly induced a clutch double play to keep the Red Hawks off the board. Morochnik went on to hurl three more spotless innings, facing only one batter over the minimum (a sixth-inning walk) and striking out five to earn his first win of the season. Last, but certainly not least, third-year Patrick Rogers shut the door in the seventh, utilizing his overpowering fastball and wipeout curve to strike out the side in order. Chicago’s offense did their part too, compiling 14 hits (each player had at least one) and scoring in six of the seven innings to secure the sweep. While it was a true team win for the Maroons, highlights included another three-hit effort by Hickey, as well as an outstanding game by Lyle, who scored three runs and reached base in each of his plate appearances.

The Maroons hope to keep their momentum rolling into the upcoming week with two more crucial series on their calendar. Chicago’s next games come against Illinois Tech on Thursday at Guaranteed Rate Field, and a pivotal weekend set of four home games against North Division leader St. Norbert College.