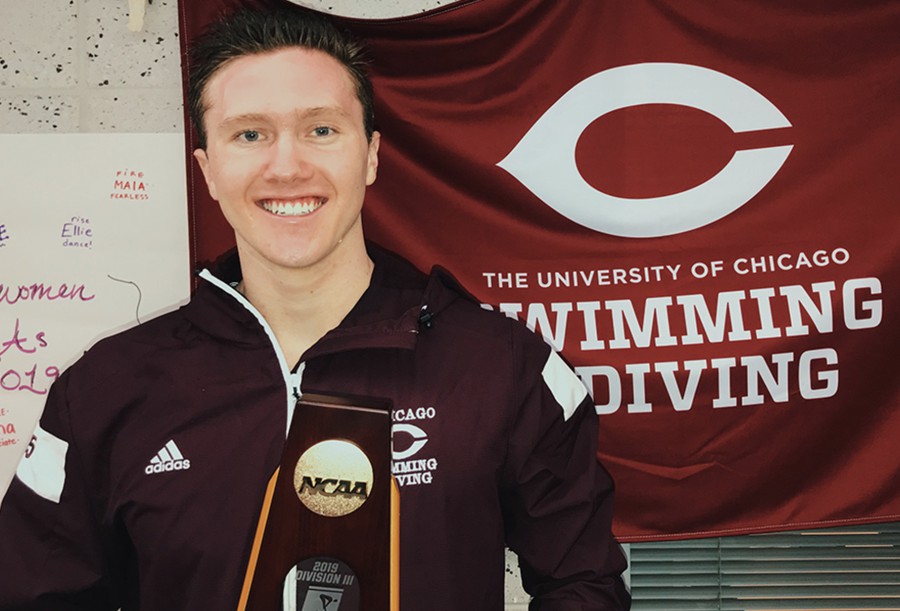 Third-year Byrne Litschgi poses with his national championship trophy at the NCAA Championship in Greensboro, NC.

It only took 1:44.04 for all the hard, grueling work of the season to pay off for third-year swimmer Byrne Litschgi. In that short amount of time, Litschgi made history. His win in the 200m backstroke at the NCAA Division III National Championships was the first individual national title for the Maroons since 2014 and the first men’s individual national champion since 1987. In addition to his national championship win, Litschgi set a new school record with his time in the event. How did Litschgi get to this point and realize his dreams of being a national champion?

Overwhelming support from his teammates sets him apart and signals his hard work and dedication to the team. Nadia Redza, a second-year, emphasized that Litschgi “sets examples both in and out of the pool through his hard work, dedication, and personality.” Clearly one does not become a national champion and owner of three school records without being a tireless worker.

That work ethic has rubbed off on his teammates as well. As second-year Gillian Gagnard puts it, “[watching him] has been pretty inspiring for the rest of the team.” In addition to his work ethic, Litschgi’s ability to be a great teammate differentiates him from other individual champions.

Although it would be easy for him to get caught up in his success, Litschgi is focused on trying to improve the team in every way possible. “Though he won an individual national championship, he is still all about the team and always pushes his teammates to the limit,” said Redza. This commitment to the team distinguishes Litschgi and has led to his position as captain next year, his final season swimming for the Maroons. This honor demonstrates both how his teammates view him and how much the team means to him. Redza and Gagnard are both excited to see how Litschgi’s final year will go and how much better he can still become.

Gagnard said, “I’m looking forward to see what he does in the pool and as a captain next season.” “We are all excited to see what he can do in his final season next year, but will also be incredibly sad when such a great leader graduates,” added Redza. To all of the fans of the swim team, it will be a privilege to watch Litschgi’s final season and to soak in all of the final moments with him as a member of the team.