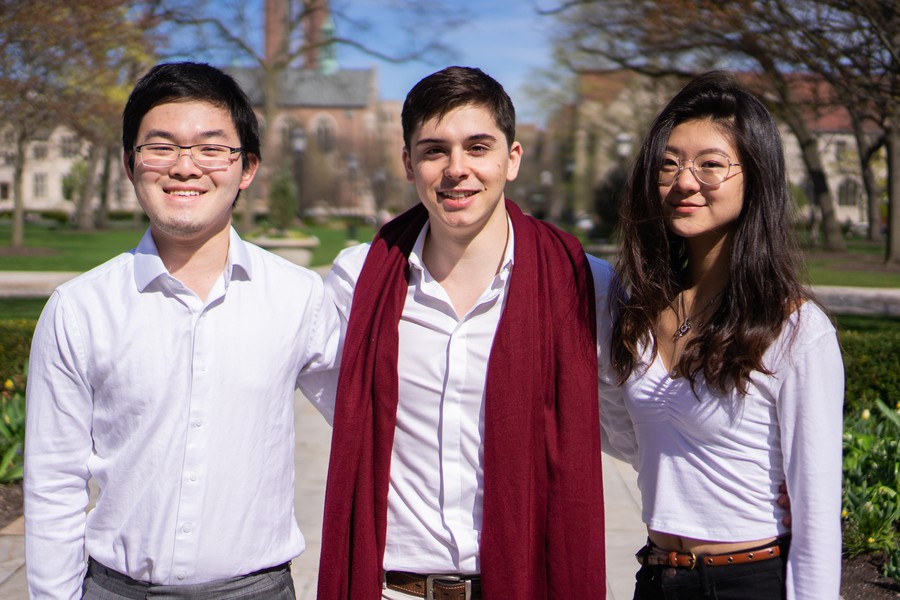 The Reform slate comprises second-year presidential candidate Kyle Shishkin, first-year Vice President for Administration candidate David Liang, and first-year Vice President for Student Affairs candidate Anya Wang. The slate, which will campaign and serve as a group if elected, is running on a platform of Student Government (SG) reform. The Maroon spoke on Saturday to all three members of the Reform slate.

Reform has prioritized improving campus security, which they have characterized as ineffective and opaque. “A student was hurt and robbed, and completely assaulted of his sense of safety. It’s terrible, but what’s even worse is that he was never contacted,” Shishkin said. “We want to change that. We want to change the experience of students and to hold hearings with UCPD [University of Chicago Police Department] to reform the way they serve our community and empower them to do it well, but also [to act] in alignment with what students need.”

The Reform candidates also want to continue work they already started as class representatives and liaisons to overhaul UChicago’s emergency alert system. Liang said that last quarter’s campus-wide lockdown changed his opinions on campus safety: “I was inside Saieh Hall when robbers broke in. This whole situation unfolded right in front of my eyes, and I had no idea what was going on until 20 minutes later—when the building was already pronounced secure—and then I received a security alert telling me to shelter in place…. A lot of students did not receive that e-mail or that alert at all, others received it 30 minutes later.”

Liang drafted a policy, the Security and Response resolution, which was passed by the College Council (CC), that called for the school to review both its emergency alert program and emergency event policies. The resolution was introduced on February 19; four out of five clauses were passed. Still, the Reform slate stressed that further work is needed. According to Liang, the passed resolution “is a great starting point that SG should use in a lot of other problems we face.”

If elected, the Reform slate also hopes to change how the University allocates funding to mental health initiatives, giving about $20,000 to a mental health–focused committee that would work with RSOs. Vice President of Student Affairs candidate Anya Wang said, “In the past we’ve had mental health days [College Break], but I feel as if the school hasn’t done enough…. We would love to enforce a committee that’s focused mainly on mental health, the Committee on Campus Mental Health, which would be really similar to SAP, the Sexual Awareness and Prevention committee.” Student Government contains a Sexual Assault Awareness and Prevention Committee, which organizes events like Sexual Assault Awareness month.

Liang referred to the RSO Make Chicago Smile, a mental health–focused RSO, as an example: “They came to the Student Government Financial Committee (SGFC) to ask for money, and I was a member of SGFC. As a member of SGFC, I know how much money they got—a couple hundred dollars. We want to have resources pooled.”

The Reform slate’s platform also includes overhauling the functioning of SG itself.

“There are two things that I really want to change,” Liang said. “Transparency and accountability.”

The Reform slate specifically objected to pay for student government representatives. “Thrice, Student Government has proposed to pay themselves and thrice it was rejected vehemently by the students,” Liang said. Executive slate pay has come before the Student Government in 2014, 2016, and 2018.

Liang also accused the CARE slate’s president of pushing for payment of student government representatives: “Last year, when a bill regarding payment of SG officials was passed, [behind] closed doors in the last meeting, our current College Council chair [Jahne Brown], who is the leader of the CARE slate, voted for it.” Last year, The Maroon reported that student government voted to approve a bill to pay SG’s president $4,500 a year and its vice presidents $2,250 a year, passing 15–4 with six abstentions. The initiative was overturned in a repeal referendum last June by a margin of 1,138 to 531.

Shishkin added that the problem with payment wasn’t the money itself, but how representatives decided to implement it.

According to Shishkin, “The problem with actual payment is a huge one, but what’s even more important is that this was done behind closed doors and nobody was asked. If the student community wants to allocates funds, OK—but the fact that it was done behind closed doors was a big violation of trust.” Liang added that the student body rejected the decision two weeks later in a referendum.

In a message to The Maroon, Brown contested that the meeting was closed-door and said that she stands by her affirmative vote.

“Many people I know, including myself, could have ran for slate earlier if we could’ve afforded to hold the position. It’s an incredibly inaccessible position for people of working-class backgrounds like myself,” she said.

However, Brown continued, she respects the opinion of the student body on the bill.

“I do however support the referendum that happened, and because it was deemed vastly unpopular I will not be pushing for it while in office,” she said.

When asked about Dean Boyer’s November 2018 announcement that all students in the class of 2023 and above would be required to remain in on-campus housing for at least two years, Reform stressed the need for administration to better consult with students.

“I am concerned with the Dean Boyer decision,” Shishkin said. “I’m worried that Dean Boyer met with whoever he needed to meet with and just sent the student body an e-mail stating his decision. It’s an increased burden on students with financial aid,” Shishkin continued.

“It’s important for people to stay on campus, but only if they want to…. People shouldn’t feel forced to stay on campus for two years,” Wang said. “[On-campus housing] is a financial burden on us and our parents, so the College taking that option away from us is something we need to voice [concerns] about.”

Reform emphasized a need to facilitate communication with campus sororities and fraternities. Wang said that Reform is eager to engage with Greek organizations as colleagues, not as adversaries, and was optimistic about the organizations’ good faith going forward.

“We don’t see Greek life as our enemies. We see them as more people that want to work with us,” Wang said. “I think there’s a stigma against frats—that they’re all sexual predators—which is definitely not true.... Our slate would create a committee of the heads of the presidents of each frat and RSOs like Phoenix Survivors Alliance and have a conversation, not a debate, about how to go about this on campus.”

According to Shishkin, the proposed Greek Life council would be organized similarly to the Panhellenic Council, an organization of sororities on campus. “What sororities are really good at is keeping up their standards through the really rigorous Panhellenic Council system, with leaders coming from every single sorority to talk about how they can improve,” Shishkin said.

Liang said that Reform hopes to involve SG more in the fight for graduate unionization. “We want to pass a resolution to affirm our support of GSU unionization and we want to prioritize this issue. We mandate the president of SG to directly engage with the administration and provide quarterly progress reports to the student body. We also want to invite Provost [Daniel] Diermeier to an SG-moderated student town hall on this issue,” he said.

The Reform slate said that they want to facilitate dialogue between students and UCPD. “We want to hear student perspectives. We want to invite students and community members to talk about their stories to College and Graduate Council,” Liang said. “We will write a report based on those stories and we will make recommendations regarding best practices to both UCPD and the school’s security department…. Be it #CareNotCops or GSU, finding that channel of communication and getting people started to reach that middle point where they can agree.”

Update April 24, 11:38 A.M.: This article has been updated with clarification on Student Government's Sexual Assault Awareness and Prevention Committee.

Update April 24, 1:42 P.M.: This article has been updated with clarification on the RSO Make Chicago Smile.