Hairston’s stance on a community benefits agreement took up much of the meeting’s time. 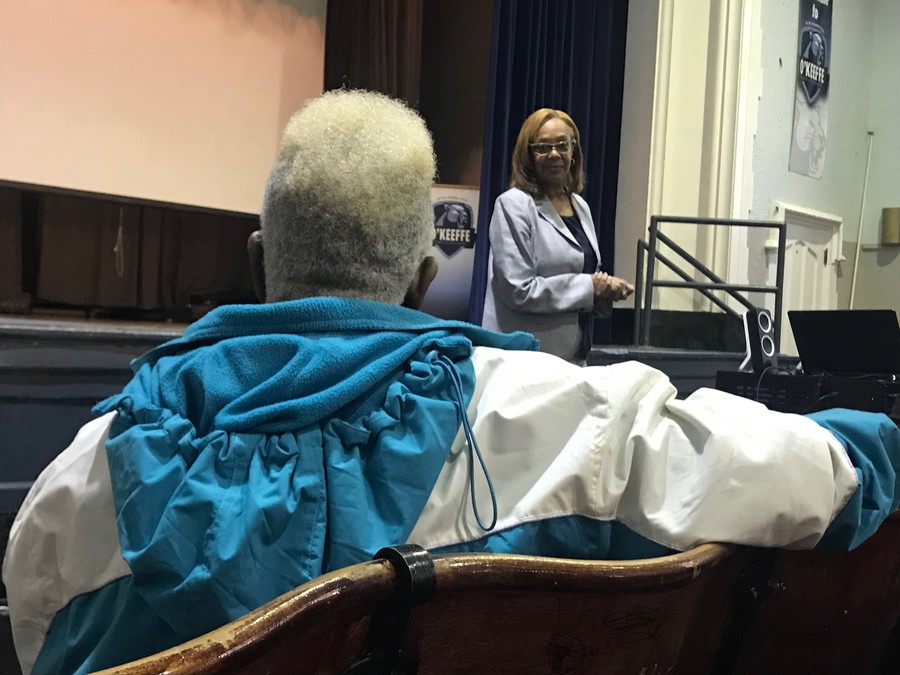 Fifth Ward Alderman Leslie Hairston held her first meeting with constituents since being declared the winner of a runoff election for the position on Tuesday night. The meeting was held at O’Keeffe School of Excellence in South Shore, where Hairston discussed a range of topics including the issue of the Obama Presidential Center (OPC).

Although Hairston was declared the winner on April 18, her challenger, activist William Calloway, petitioned for a discovery recount the next day. The Board of Elections will hold a status hearing on May 2 after the recount process is over. Despite this, Hairston, who has held the office since 1999, said she “expects to be sworn in on May 20.” The alderman did, however, acknowledge complaints that constituents brought against her which brought her close to losing her seat.

“It is a humbling experience to be in the runoff after 20 years of service. And I want you all to know that your concerns have been heard. Transparency, accessibility, and city services have always been on my priority list. Now I see that we have more work to be done.”

One of the issues Calloway pushed in his campaign against Hairston was a lack of constituency services for many residents of the southern neighborhoods in the wards, like South Shore and Greater Grand Crossing. Some attendees of Tuesday’s meeting expressed similar sentiments, asking the alderman how she would improve communication with her constituents. In response, Hairston said she would bring back a previously circulated newsletter about her office’s projects and increase her social media presence.

Hairston’s stance on a community benefits agreement (CBA) was also a point of tension during the race, and discussion about the proposed ordinance took up a large amount of the meeting’s time.

For years, activists have been proposing a CBA that would protect residents living near the incoming OPC in Jackson Park from displacement, but Hairston’s stance on the issue has been unclear. In 2017, she wrote an open letter to the Obama Foundation demanding the organization ensure that community members reap the economic and educational benefits from the OPC and its construction. Since the Obama Foundation does not support a CBA, Hairston has proposed a neighborhood stabilization plan for the South Shore neighborhood, which would include bonds issued by the City of Chicago and Cook County funding business and other economic developments in the area.

At Tuesday’s meeting, Hairston brought Eli Williamson, who has assisted in the plan’s development, to explain its details. However, Williamson and Hairston said they did not know what the timetable for the plan would be or how many bonds would need to be issued.

Hairston did say she would support a CBA after voters in the fifth precinct of the Fifth Ward, the only precinct in the Ward that had the question on their ballot, showed strong support for this type of ordinance during the February 26 general elections. While many perceived this as a shift in policy, Hairston maintained it was not.

Hairston committed to supporting a CBA in response to a constituent’s question on Tuesday night and said she would need to meet with newly-elected 20th Ward Alderman Jeanette Taylor, who represents the majority of Woodlawn, to coordinate how to best protect the affected neighborhoods.

Members of the CBA Coalition, an organization of activist groups in the area that supports the ordinance, as well as other attendees, asked for a more structured process for collaboration between the alderman’s office, the Coalition, and other interested groups, including a request for groups to present their agendas to constituents. Hairston reiterated her insistence on having all affected parties represented in such a process, calling attention to the fact that the CBA Coalition does not include any South Shore groups. “[I would] need time to put one together,” she said. Hairston also emphasized how the ordinance would affect her and that she shared in attendees’ frustrations.

“I don’t want to be put out of my house either…. I too have to worry about not having enough money to pay my taxes. I am not immune from all of this, I am directly impacted,” Hairston said. “I’m not sitting in a high tower looking down saying, ‘What’s gonna happen?’ I live here, I have lived here, I intend to stay here.”

Hairston was declared the winner of the April runoff election after a discovery recount was conducted at Calloway’s request.