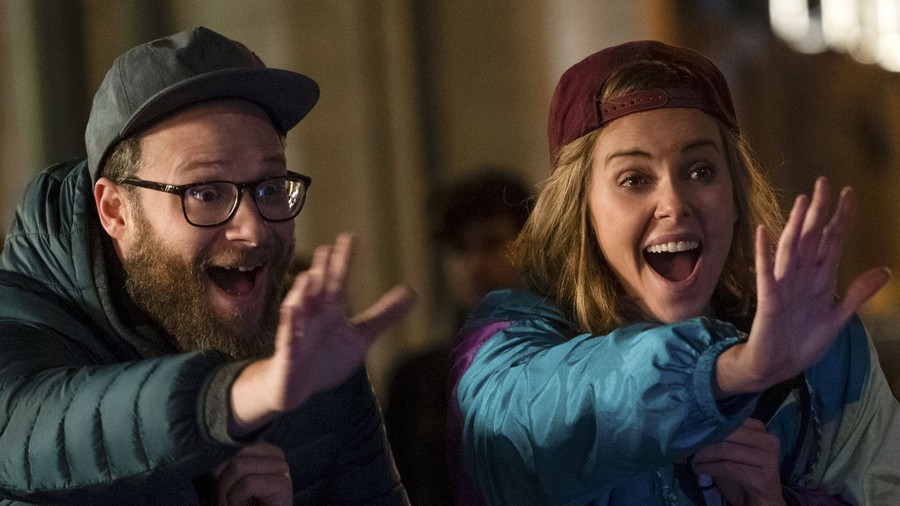 The film derives much of its comedy from commentary on our current political climate, but remains funny, lighthearted, and never preachy.

On April 19, Doc Films hosted an advance screening of Long Shot, the upcoming romantic comedy starring Seth Rogen and Charlize Theron in what could be her comedy breakout. The plot is driven by the relationship between Fred Flarsky (Rogen), a gonzo journalist, and Charlotte Field (Theron), the United States secretary of state. The film derives much of its comedy from commentary on our current political climate, but remains funny, lighthearted, and never preachy. The latest from Seth Rogen and Evan Goldberg rivals their past work.

After the screening, I sat down with O’Shea Jackson, Jr. (Straight Outta Compton) who plays Fred’s best friend Lance, one of the funniest characters in the movie, and discussed Long Shot as well as plans for Jackson’s future.

Patrick Egan: I noticed the movie incorporated politics a lot, especially contemporary politics. Do you think there’s a natural relationship between comedy and politics?

O’Shea Jackson, Jr.: Yeah. The beauty about doing a smart comedy is we take heavy topics that are serious business and we present it in a lighthearted manner. Through a smart comedy you plant the seed, you at least get people thinking about it without being too aggressive on one side. It’s not meant to offend anybody. You don’t want to make a movie for half the country—it just wouldn’t make sense. We make sure we balance it out with Lance’s character and his big twist. It’s just about finding the balance of not offending either side, letting them both get their tiny victories, and realizing the common goal is just making a funny movie.

PE: Do you think you have any personal ties or affinities with your character?

OJ: My whole thing is if I think it’s good, I can make somebody think it’s great. Some of what I based Lance off of is a mix of me and my friend Pasha. I say that my friend Pasha can sell water to a drowning man. Somebody who doesn’t need it at all and thinks, “Alright, yeah, maybe I’ll take some.” And that’s Pasha. Pasha can just make you believe. And so I wanted that. I wanted to be just the super enthusiastic homie, you know? Just the ultimate wingman: We gotta do this! We gotta climb this mountain whether you like it or not. And that’s who Lance is.

PE: Who do you think should go see Long Shot? What kind of audiences would like it the most?

OJ: It’s definitely something that you want to experience in theaters just because of the soundtrack. You know, it’s got some jams in it. It’s funny! It’s just funny all the way through. You could see it with friends or family, sober or wasted!

PE: Do you think you’ll go on and do more comedy in the future?

OJ: I will take on all checks that they try to give me! But it is for sure something that I want to do. I wanted to establish myself as a dramatic actor first before I ventured into comedy because I feel that it’s easier to do that transition from drama to comedy than it is from comedy to drama. If you see somebody who makes you laugh all the time, and then they want you to take them serious in a serious role, it’s just harder to do. I made sure I strategized each role after Straight Outta Compton to let them know that, yes, I take my acting seriously. I try to be the best thespian I can be.

PE: Do you see yourself continuing to pursue your rap career, or are you just mostly focused on acting now?

OJ: Right now it’s mostly on acting. To stay in music, I started producing. You know, when you do lyrics sometimes they can typecast you into one type of role. There’s certain roles my dad just won’t get, because he’s Ice Cube. They won’t consider him for it, and I didn’t want that. Producing is a way to stay within music and stay behind the scenes while still being able to create a song and work with artists, but, like I said, all checks! I’m open to all checks, and the dream is to somehow get involved into video games. I’m a video game nerd, dude. My whole goal is to be the guy who gets video game movies right. Even if I gotta write them myself, direct them myself. That’s the goal.

Long Shot comes out in theaters on Friday, May 3.