The resolution has the support of both Graduate Students United (GSU) and Students Organizing United with Labor (SOUL). 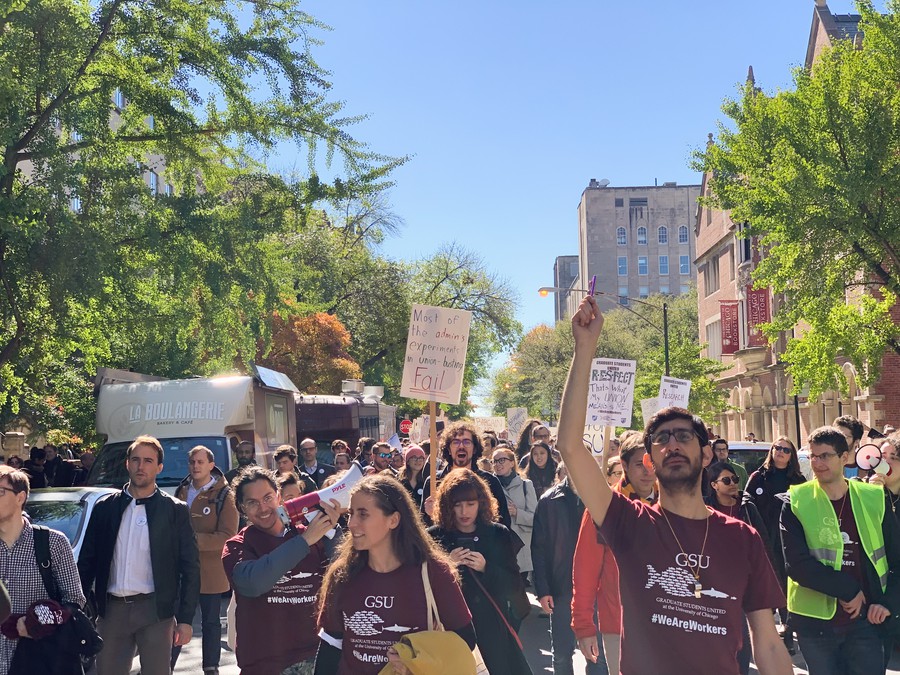 Demonstrators march through the street on South Ellis Avenue.

This resolution follows the walkout in autumn quarter, which according to the resolution’s sponsors had over 600 participants and was the largest walkout at the University since the Vietnam War. Graduate student workers walked out of classes at 11:03 a.m. to symbolize the 1,103 votes in favor of unionization during the vote in October 2017.

Graduate student workers, according to the resolution, remain concerned about lack of adequate healthcare and wages that do not cover the cost of living, among other issues. The sponsors of the bill believe that GSU will help graduate students obtain living wages appropriate for residing in Hyde Park, improved healthcare, and better grievance-reporting procedures.

Some SG representatives expressed concerns about taking a position on GSU, citing concerns that a decision might spark a strike during finals, which could interfere with graduation for outgoing fourth-years. According to Class of 2019 representative Danille Charette, "It seems especially important that the SG Assembly maintain its tradition of neutrality, since undergraduate and graduate interests are likely to conflict on this issue. A strike during finals season, for instance, would be a major disservice to our undergraduates."

Nuguse responded, “Even if that did happen, we would still get our grades eventually, and isn’t it more important that our teachers are able to live above the poverty line?”

Graduate Council (GC) maintains a neutral position on GSU, which the bill's sponsors claimed was previously necessary only so that SG could facilitate the 2017 graduate student worker vote on unionization. The sponsors argued that GC’s neutral stance on unionization was unnecessary and outdated, stating, “If our constituents want unbiased information, they will go to resources such as The Maroon.”

Nuguse argued that although this resolution focuses on graduate students, it also pertains to undergraduates. “It’s unethical to be taught by exploited labor, and improving the standard of living of our educators will improve the quality of education we receive by graduate students,” she said.

An incorrect statement about the healthcare offered to graduate student workers was removed from the article.

The article previously stated that the resolution’s sponsors spoke in favor of “reversing” Graduate Council’s earlier decision. Parliamentarian Sofia Barnett clarified to The Maroon that “Grad Council remains in a position of neutrality irrelevant of this new vote.”

In the original SG minutes, a quote was misattributed to Class of 2019 representative Brett Barbin. The Maroon originally reproduced that incorrect attribution in the article. The statement was in fact made by Class of 2019 Representative Danille Charette, who also provided an amended version of the quote recorded in the SG minutes.