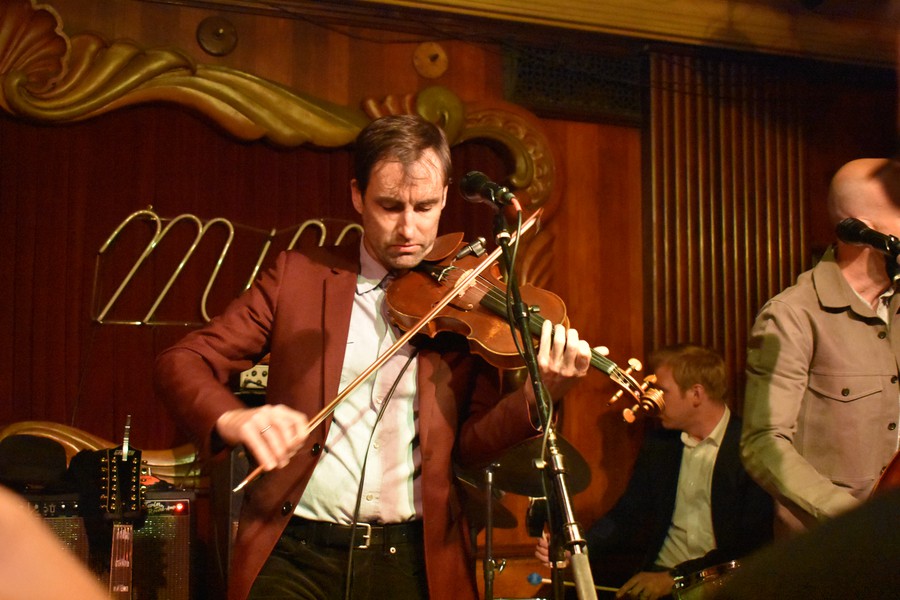 On Wednesday night, the well-worn dance floor of the Green Mill was packed with an assortment of new fans and long-time devotees of Andrew Bird, all thrilled to see the musical polymath return to Chicago. Mostly performing material from his newest album My Finest Work Yet (released March 22 of this year), Bird and his band graced listeners with a heartfelt evening of fresh tunes, old favorites, and classic jazz standards. The Chicagoland native performed about an hour and a half of music with his eyes closed, though from time to time he’d glance up at his fellow musicians or fix the audience with a brief, wry look.

The set was bookended by the jazz standards “I Fall in Love Too Easily” and “I Can’t Give You Anything But Love,” two fitting tributes to the atmosphere of the historic Green Mill. Established over a hundred years ago, the jazz club is one of Chicago’s most beloved small venues. Bird himself remembers coming to the bar in the mornings to listen to the jukebox—he’s now the one providing the music, watched over by the club’s eerily-lit statue of the goddess Ceres. Bird’s song “Sisyphus,” another reference to classical mythology, opens his new record. The songwriter is a master of creating spacious, unhurried melodies—a skill immediately evident in “Sisyphus.” My Finest Work Yet is full of such genre-bending songs with tongue-twisting lyrics that reflect Bird’s musical versatility.

Bird has a bit of a reputation as a one-man band. The self-professed “singer, violinist, whistler” often uses an electronic looping system to layer his tracks. This makes it easy to forget about the influence of his musical collaborators. However, it became evident in person just how much the other members of his band have contributed to the sound of the new album. A standout among Bird’s brilliant accompanists was singer-songwriter Madison Cunningham, who performed her own song, “Something to Believe in.” Cunningham’s controlled, soaring vocals shone in this sincere tune. She and Alan Hampton (vocals, bass, guitar) also lent an understated, beautifully blended harmonic depth to “Cracking Codes” and “Fallorun.”

Bird did add a few surprises to the set. “Why?” from Bird’s The Swimming Hour (2001) was a playful throwback. The song showcased Bird at his most conversational—he changed the tone of the drawled refrain (“Damn you for being so easygoing…”) every time he repeated it, sometimes speaking, sometimes singing, and accompanied by a relaxed pizzicato violin.

A highlight of the evening was “Pulaski at Night,” a song popularized by Netflix’s Orange Is the New Black and HBO’s The Young Pope. Nowhere would it have been more appropriate to perform that song than here in Chicago, Bird’s tongue-in-cheek “city of light.” The band was clearly having a rollicking good time with this one: The live performance was much more driving, up-tempo, and percussion-led than the comparatively sedate studio version. I sure didn’t expect to hear a 16 bar drum solo in the middle of a song that made me cry when I was 18, but you know what? It works.

Despite the obscurity of Bird’s lyrics, they retain the charm and poetic appeal of a songwriter who clearly loves to experiment. In his own words, “And though I may speak to you in tongues/ we don’t need Rosetta Stone/ to know how this song is sung/ and that what I say is true…./ You can read between the lines/ and you can savor every word.” The audience at the Green Mill did indeed savor every word. Bird’s repertoire reflects a number of traditions—folk, classic rock, jazz, orchestral modernism—but the compelling combination of bleakness and yearning hope that permeates My Finest Work Yet is entirely his own creation.