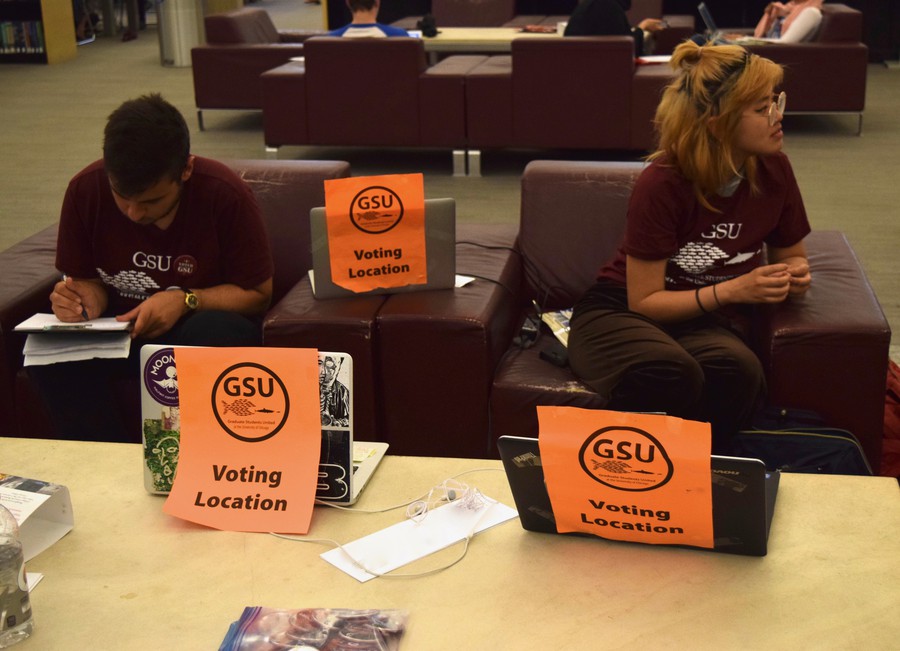 A Graduate Students United polling location in the Regenstein Library, where graduate students helped members cast their vote on whether or not to strike.

Graduate Students United (GSU) members are likely to strike before the end of the quarter; 1,134 members voted to authorize industrial action, while 112 voted against, GSU organizers confirmed Monday evening. Monday’s result is perhaps the starkest escalation yet of a long-simmering conflict between GSU and University administration.

The passage of the vote, which ran between last Wednesday and Sunday evening, authorizes GSU to take part in its first-ever industrial action. Responding to a request for inquiry from The Maroon, GSU organizers explained that there were two specific questions on the ballot: “the first asked members if they authorized an industrial action” while “the second invited people to take part in a committee that will make decisions about the conduct of the action.”

The specifics of an industrial action—including when it would occur and what it would look like—depend on GSU members themselves, who will democratically determine what the work action will involve through group discussions. In conversations with The Maroon last week, individual GSU members expressed private support for work stoppage strategies that included not holding class, leaving papers ungraded, and encouraging solidarity actions from undergraduates.

Grad students at UChicago voted by an enormous margin—91% in favor—to go on strike. The administration can still recognize our union and keep us from having to withhold our labor, but we’re ready to show you our collective power if not. ✊💪

GSU organizers stressed to The Maroon that a strike could be avoided if the University recognizes the union. Graduate students voted to form GSU 19 months ago, in a two-to-one vote, but withdrew from an NLRB review process last February, citing fears that the group would reverse its earlier ruling on whether graduate students nationwide had a right to unionize. Since then, GSU has sought voluntary recognition from University administration, engaging in a series of demonstrations to pressure the University. Examples of past GSU demonstrations include a walk-out last fall, which drew a crowd of hundreds and included the presence of leadership from the Illinois Federation of Teachers. More recently, GSU, along with representatives from several local unions, took part in a May Day rally on campus.

On Tuesday, University spokesperson Jeremy Manier responded to The Maroon's request for comment. His full statement reads: “We have great appreciation for all that graduate students bring to the University’s intellectual community. The University is working directly with graduate students and faculty on many fronts to improve graduate education and quality of life.”

This article was updated to clarify that Graduate Students United voted on whether to authorize industrial action.