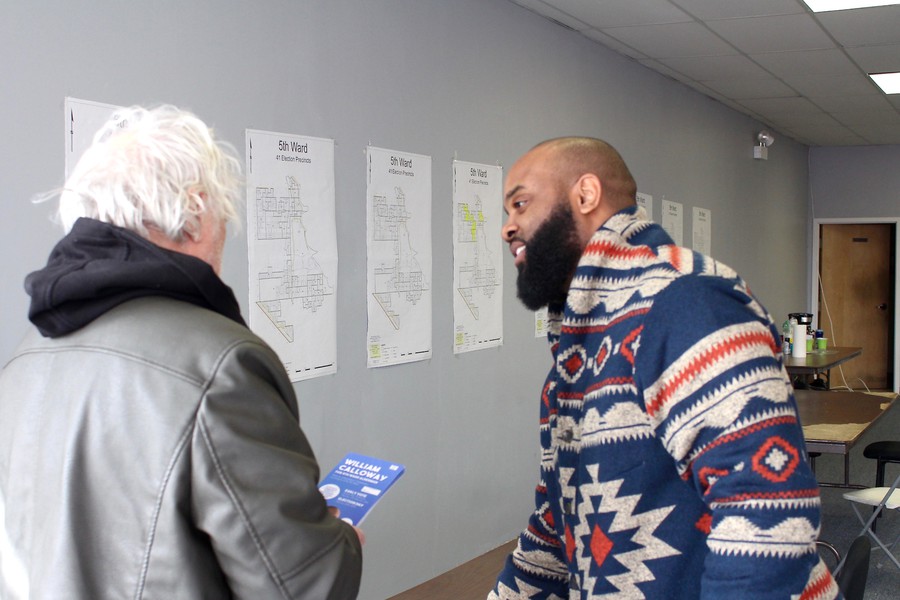 Calloway in his office in South Shore.

Cook County judge LaGuina Clay-Herron rejected Fifth Ward aldermanic candidate William Calloway’s petition for a temporary restraining order (TRO) against newly reelected alderman Leslie Hairston on Friday afternoon. The petition aimed to prevent her from being sworn in to her sixth term as alderman, which occurred on Monday, May 20.

The Board of Election Commissioners (BOE) had already declared Hairston the winner of the Fifth Ward race at a status hearing on May 9 after a discovery recount requested by Calloway confirmed her victory by a margin of 176 votes.

According to Frank Avila, Calloway’s attorney, the petition argued that because election judges at four precincts in the ward did not fill out a Form 80 document that certifies the results from each precinct, the results of the entire election cannot be certified, and Hairston cannot be sworn in. The petition also stated that the lack of an official results record, known as a results tape, that should be attached to each precinct’s Form 80 from 15 precincts further prevents the certification of election results.

The BOE could not be reached for comment on Avila’s claims by the time of publication.

Calloway said to reporters after the May 9 hearing that he and Avila are planning on filing an amended complaint alleging that the election code violations mentioned in the TRO petition occurred during the April 2 runoff election. BOE spokesman Jim Allen also said on May 9 that the board plans to dismiss this complaint before a scheduled May 23 status hearing and swear Hairston in.

Of the four precincts allegedly lacking Form 80s, Calloway won fifth and 10th precincts, as he did many other southern precincts in the ward, but lost precinct 35 according to current election results. Of the 15 precincts allegedly missing results tapes, eight are in the northern part of the ward where Hairston received a larger share of the votes.

Avila had notified Hairston’s attorneys of the order before the hearing this afternoon. The Hyde Park Herald reported on Thursday that Delmarie Cobb, Hairston’s spokeswoman and campaign manager, said that Calloway “starts to look like a sore loser” by continuing to challenge election results.

“Calloway has every right to continue seeking redress if he believes something wrong took place on Election Day, but at some point, he starts to look like a sore loser whose only intention is to force Leslie Hairston to incur additional legal fees,” Cobb told the Herald.

The Fifth Ward race was the longest running race of this municipal election cycle. Only two other wards underwent recounts after the runoffs, and both ended with much smaller margins of victory. 33rd Ward incumbent Deb Mell conceded to challenger Rossana Rodríguez-Sanchez after a recount confirmed her 13-vote loss, while 46th Ward incumbent James Cappleman defeated challenger Marianne Lalonde after a recount widened his post-runoff lead from 25 to 30 votes.

Representatives for Hairston did not immediately respond to requests for comment.