Non-Tenure-Track Faculty Should Be Eligible for the Quantrell Prize 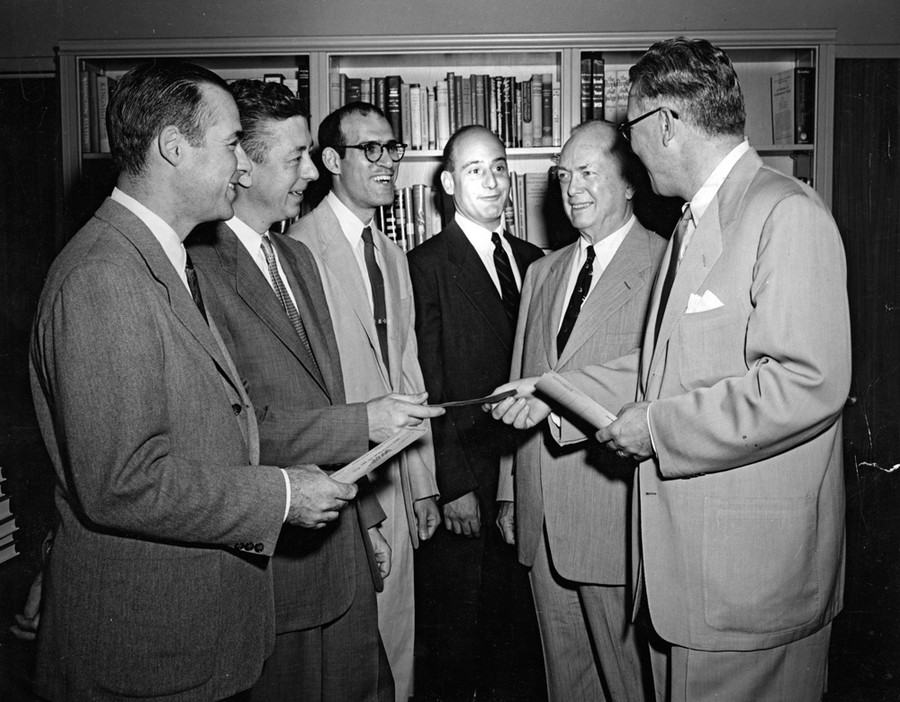 University of Chicago chancellor Lawrence A. Kimpton (far right) presents the Quantrell Award to members of the university faculty. Ernest E. Quantrell, university alumnus and trustee who founded the award, is second from right.

The University’s current requirements for the award—that recipients be “long-term, full-time UChicago faculty members who are tenured, on the tenure-track, or serve as Senior Lecturers”—unjustly exclude worthy candidates. The Maroon Editorial Board believes that a prize to reward good teaching should be open to all faculty members who teach. However, the University has put a secondary consideration—guarding the award’s prestige—ahead of its purpose of commending great pedagogy.

English professor Kenneth Warren, who received the Quantrell in 2005, told the Maroon Editorial Board that while he is not positioned to weigh in on the legal obligations at stake in Faculty Forward’s ongoing grievance negotiations over the award, he believes non-tenure-track faculty deserve to be eligible for the prize.

“I see no reason why our non-tenure-stream colleagues should be barred from this distinction.  They are valued colleagues who contribute substantially to the University’s educational mission, and I believe they should be eligible for awards when students single them out for recognition,” Warren said.

Quantrell eligibility is not a new point of contention for non-tenure-track faculty: Faculty Forward made the prize a key plank in their contract negotiations, which ended after years of bargaining efforts when a contract was finally ratified in March 2018.

That contract reads: “Nothing in this Agreement precludes a [non-tenure-track] Lecturer from being nominated for and receiving any teaching awards for which they are eligible, including the Llewellyn John and Harriet Manchester Quantrell Award.”

Union members were therefore surprised to learn earlier this spring that a student’s nomination of a non-tenure-track faculty member had been deemed ineligible. After Faculty Forward filed a grievance in early April, the University rejected that grievance in early May.

Asked to comment on the grievance, University spokesperson Jeremy Manier told The Maroon, “The collective bargaining agreement did not change eligibility standards for this or any other award.” Manier’s statement did not elaborate further or offer any explanation of the apparent inconsistency between Faculty Forward’s contract and the University’s eligibility requirements.

The Quantrell prize was established before non-tenure-track positions were common at the University. It was not until the 1970s that adjunct positions became commonplace. Today, universities rely heavily on the work of non-tenure-track academics, who are paid lower wages and work under short-term contracts, in contrast to their tenured colleagues—a practice that has come increasingly under scrutiny.

With mounting national attention to adjuncts’ low pay and insecure working conditions, and the lack of recognition of non-tenure-track researchers’ valuable work, the University should uphold its agreement to make non-tenure-track faculty eligible for the award.

The Quantrell Award was founded in 1938 with an eye to improve incentives for undergraduate education—encouraging faculty to teach, rather than just do research—and to improve the classroom experience in order to build a loyal donor base of College alumni.

“Harvard seems to be a leader in both [graduate and undergraduate] departments and there is no reason why Chicago should not be the same,” Quantrell wrote in 1939, a year after founding the award. “I have the impression that the results of our alumni campaign will depend largely on former students who did nothing but undergraduate work as contrasted with graduate students. If this is true, it is shortsighted not to emphasize teaching and undergraduate work in our fund raising literature.”

The University has emphasized that the award’s intent is “to encourage faculty members to excel in teaching as well as research,” glossing over the corollary function of improving the classroom experience: to attract more donors in the long run. But if Quantrell intended the award to encourage great teaching, then surely non-tenure-track lecturers, who teach many undergraduates across all departments, should be made eligible.

The Quantrell is one of the oldest prizes for undergraduate teaching, and beyond fiduciary incentives, the University has jealously guarded its prestige. Academic awards—even ones conferred only within the University—are part of the larger project of making UChicago more marketable and exclusive.

Jason Grunebaum, a member of Faculty Forward’s bargaining committee and a lecturer in South Asian Languages and Civilizations, told The Maroon that during bargaining, when the union raised the issue of Quantrell eligibility, one administrator argued against non-tenure-track eligibility, calling the award “very prestigious.”

The award is prestigious, it’s true, and Quantrell winners regularly go on to win national laurels. To take one example, Quantrell awardees frequently win the esteemed Guggenheim Fellowship, too. History professor Rachel Fulton Brown won the Quantrell in 2007, and was awarded the Guggenheim in 2008. Classicist Shadi Bartsch-Zimmer and critical theorist Lauren Berlant are among several other faculty members who have received both a Guggenheim fellowship and the Quantrell.

Certainly, faculty members receive awards based on the merits of their scholarship and pedagogy; the Quantrell has been awarded to many brilliant teachers, and we are glad their valuable contributions have been recognized. But it would be naïve to ignore that in academia, accolades build on one another, and prizes help professors build a brand.

The University should resist making the Quantrell merely one more signaling mechanism for prominent careers. If awards mean anything, they should be given based on merit, not just in order to bolster faculty members’ clout and academic prominence.

Professor Agnes Callard (A.B. ’97), a rising star in philosophy who was awarded the Quantrell in 2017 and is a current Guggenheim fellow, told The Maroon in an e-mail that the prestige of the award is not dampened by the inclusion of non-tenure-track faculty.

“The best teacher I had as an undergraduate at UChicago was a Quantrell Winner, her name was Amy Kass; she was not tenure track faculty. For anyone who knew her, her receipt of the award has done nothing but increase its prestige and meaning.” (As a non-tenure-track Senior Lecturer, Kass was eligible for the award. Other non-tenure-track lecturers remain barred from eligibility.)

The University should not exclude non-tenure-track lecturers’ valuable pedagogy from recognition in order to maximize the distinction conferred on the award’s recipients. Rather than gatekeeping the Quantrell’s prestige, the University should look to the award’s stated aim of honoring “scholar-teachers who inspire students to become more enlightened thinkers and effective citizens.”

Deputy Editor-in-Chief Elaine Chen recused herself from this editorial due to her recent involvement in coverage of the Quantrell award and Faculty Forward.