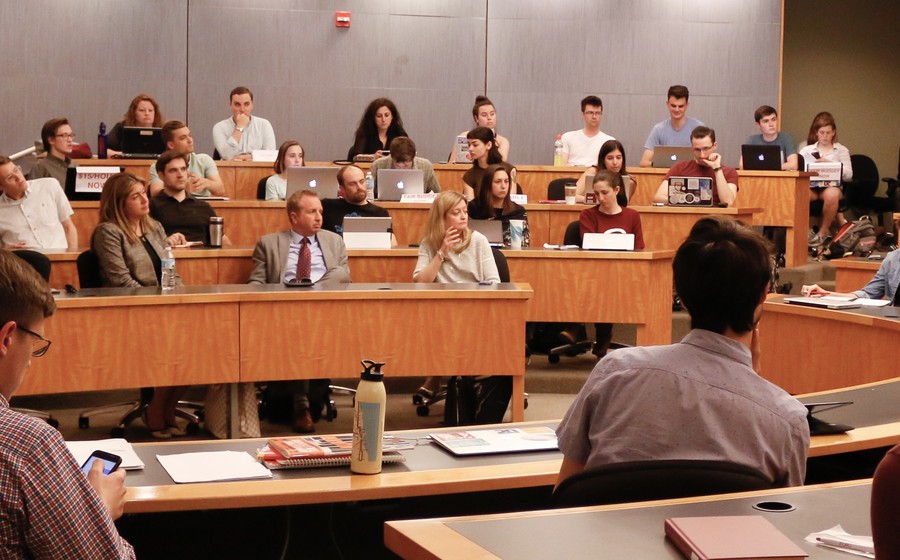 A student government meeting in 2018.

Student Government (SG) Assembly passed the annual budget for the 2019–20 academic year on Monday. It also passed a bill urging the administration to form an academic department for the Comparative Race and Ethnic Studies (CRES) major, a bill to revise the Sexual Assault Awareness and Prevention (SAAP) committee bylaws, and two bills increasing the transparency of various SG committees and assemblies. A bill which would have modified SG bylaws to prevent SG from paying members without a referendum was rejected by over 60 percent of voting representatives.

At the Assembly meeting, as in previous years, SG voted unanimously to pass the annual budget which will govern spending for the following academic year.

The Coalition of Academic Teams, which includes competitively ranked academic RSOs, such as Model United Nations (MUN) and the Chess Club, was granted $261,521 for the 2019–20 academic year. This money will be used primarily for travel expenses, representing a 4.86 percent increase in funding.

When questioned about why academic teams were granted such a large increase in funding, SG President Sat Gupta referenced MUN’s recent appeal to the SG Finance Committee (SGFC) for increased funding over the prior academic year and the addition of Mock Trial to the committee.

According to Gupta, many new community service RSOs were recently granted status, all of which will require funding from CSF in the upcoming academic year.

College Council’s (CC) budget of $3,000 was consistent with last year’s allocation. This year, CC used only $2,000 of their funding, opting to donate the remaining $1,000 to the Emergency Fund. The Emergency Fund is an organization which is “aimed at providing emergency aid to marginalized students by pointing them towards helpful resources and providing them with financial awards,” according to the Emergency Fund’s Facebook page.

Graduate Council (GC) funding increased by 2.1 percent to $510,500. GC funding is determined exclusively by the administration.

The Program Coordinating Council, SGFC, Annual Allocations, and the Sports Club Fund all had an increase of 1.3 percent in their budgets, which was listed as a “cost of living baseline increase.” According to SG Vice President of Student Affairs Malay Trivedi, this baseline increase is used solely to account for inflation for allocating committees.

The SG Administrative Budget, which, among other benefits, allows SG to provide free tampons in the Reg and the airport shuttle service, was granted a budget of $22,500. This represents a 4.65 percent increase from last year’s allocation.

Finally, the Committee on Campus Sustainability (CCS), which recently became a standing SG committee, was granted an initial budget of $1,000. The committee plans on using the budget to continue funding the Sustainability Czar Program in Housing and Earth Day activities.

SG also discussed the allocation of rollover funding, which are funds that weren’t used over the previous year. Under SG bylaws, one third of this funding is initially given to the graduate student summer fund, and two thirds are given to the undergraduate student summer fund. If the money in these funds isn’t spent by the end of summer quarter, it rolls over to the incoming executive slate. If the new executive slate is unable to utilize the money by November 1, the money is reincorporated into the SGFC budget.

Trivedi proposed, rather than rolling unused funding back into the SGFC budget, that these extra funds be used to fund the Monumental Women Project, which aims to create busts and portraits honoring women who have made significant contributions to the University in the past and present.

Due to concerns over already tight RSO budgets, the allocation of rollover funds was tabled and will be voted on at a later date.

During the Assembly meeting, Class of 2022 Representative Zebeeb Nuguse and Class of 2019 Representative Ayling Dominguez presented a resolution urging the administration to form a Race and Ethnic Studies Department, expanding the current program consisting solely of an undergraduate major in Comparative Race and Ethnic Studies (CRES). The resolution passed with 14 votes in favor, five against, and seven abstentions.

Next, SG unanimously voted to revise the bylaws governing SAAP. The revisions change the number of seats on the committee to nine seats and require a two-thirds majority approval by SG Assembly for members to be appointed. SAAP is also now required to sponsor an annual campaign to support survivors, along with a Valentine’s Day resource campaign and study break. A clause giving SAAP its own adviser separate from the Center for Leadership and Involvement (CLI) was removed due to issues with communication and efficiency over the past year. SAAP, like other committees, will now by default be advised by the CLI.

The Minutes with Increased Clarity Act passed with 11 votes in favor, two against, and 10 abstentions. The bill requires the secretary to record all SG meetings both to increase the accuracy of SG minutes and to allow organizations such as The Maroon to “accurately report on the opinions and statements made by members of Student Government.”

The Records Preservation Act failed to pass, with three votes in favor, 15 against, and five abstentions. The bill would have required all SG Executive Slate members, Liaisons, Council chairs, and committee chairs to use an official SG e-mail address for SG related matters, and to maintain all records of e-mails sent through these channels for at least four years. The bill failed to pass primarily due to concerns about delegating the work of e-mail creation and maintenance.

An amendment to the SG Assembly bylaws, which would have required a student referendum prior to passing any bill allowing SG representatives to be paid by SG, failed to pass with six in favor, 10 against, and seven abstentions. Those opposing the bill worried about taking power away from SG. Jahne Brown, incoming SG president, abstained from voting due to a conflict of interest. The CARE (Community, Amplify, Represent, Empower) slate, headed by Brown, pledged during their campaign to honor the student referendum where a supermajority of students voted to reject a proposal to pay SG executive slate members.