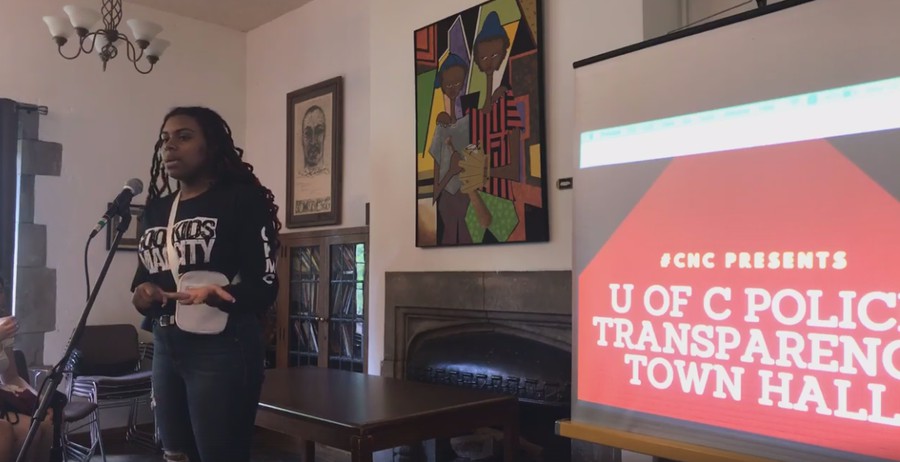 A speaker at the UCPD town hall meeting.

Courtesy of Students Working Against Prisons

By Darcy Kuang   and Brad Subramaniam

#CareNotCops, a joint campaign between UChicago United and Students Working Against Prisons (SWAP), organized a UCPD transparency town hall this Saturday. The town hall invited local activists and students to discuss their experience with the University of Chicago Police Department (UCPD) and thoughts on UCPD transparency.

#CareNotCops began last spring as a response to the UCPD shooting of student Charles Thomas, who now goes by Soji Thomas, during a mental health episode. This year, UChicago United and SWAP have campaigned for UCPD transparency, asking the University to release UCPD’s budget and information about funds being allocated for Safety and Security.

Wallace began the event with a moment of silence for Frazier.

Wallace said that UCPD negatively affects local high students. “[GKMC] has a few members who go to Kenwood, and UCPD often harasses the students there. They will come out and start harassing young black men…asking them different questions when they are just getting out of school and going home,” Wallace said.

Wallace also addressed the need to reimagine safety methods in community spaces other than policing. “We need to move towards us being able to say, ‘Hey, we are here and we know how to hold ourselves accountable’ without this massive police force that does nothing but kill people,” Wallace said.

The town hall invited Thomas to speak via Skype. Thomas has been waiting for trial under house arrest since last April.

According to Thomas, Frazier’s death and his own experience showed that police forces need more mental health training. “I heard that UCPD only received eight hours of mental health training,” Thomas said, “and crisis intervention teams [from CPD] were there with Myles Frazier, and we saw that it didn’t work.”

May spoke about UCPD along with the University’s land grabs in Washington Park. “It is really hard to talk about the police department alone…. Police were developed for the purpose of protecting property, and that’s what UCPD does.”

“The University has bought all these land in Washington Park…and then the University adds UCPD foot patrol in the areas west of Cottage Grove, and the police are now there to protect the property they have.”

May said that UCPD works as what she called a visual representation of safety. “A lot of people think if we have more police and harsher sentences, then everything would be OK. But that’s not really what the UCPD is doing.”

The town hall then invited the audience to share what they think safety means in this community. Kelly Lo, a first-year undergraduate student, called on the University to stop reinforcing the stereotype of the dangerous South Side.

Apoorva Krishnan, a third-year student in the College and a member of #CareNotCops, noted that the University had refused to communicate with the organization thus far. “The only communication that we’ve actually heard from the administration was when they contacted us to decline our invitation to this town hall,” Krishnan said.