Trapped in a World of White People 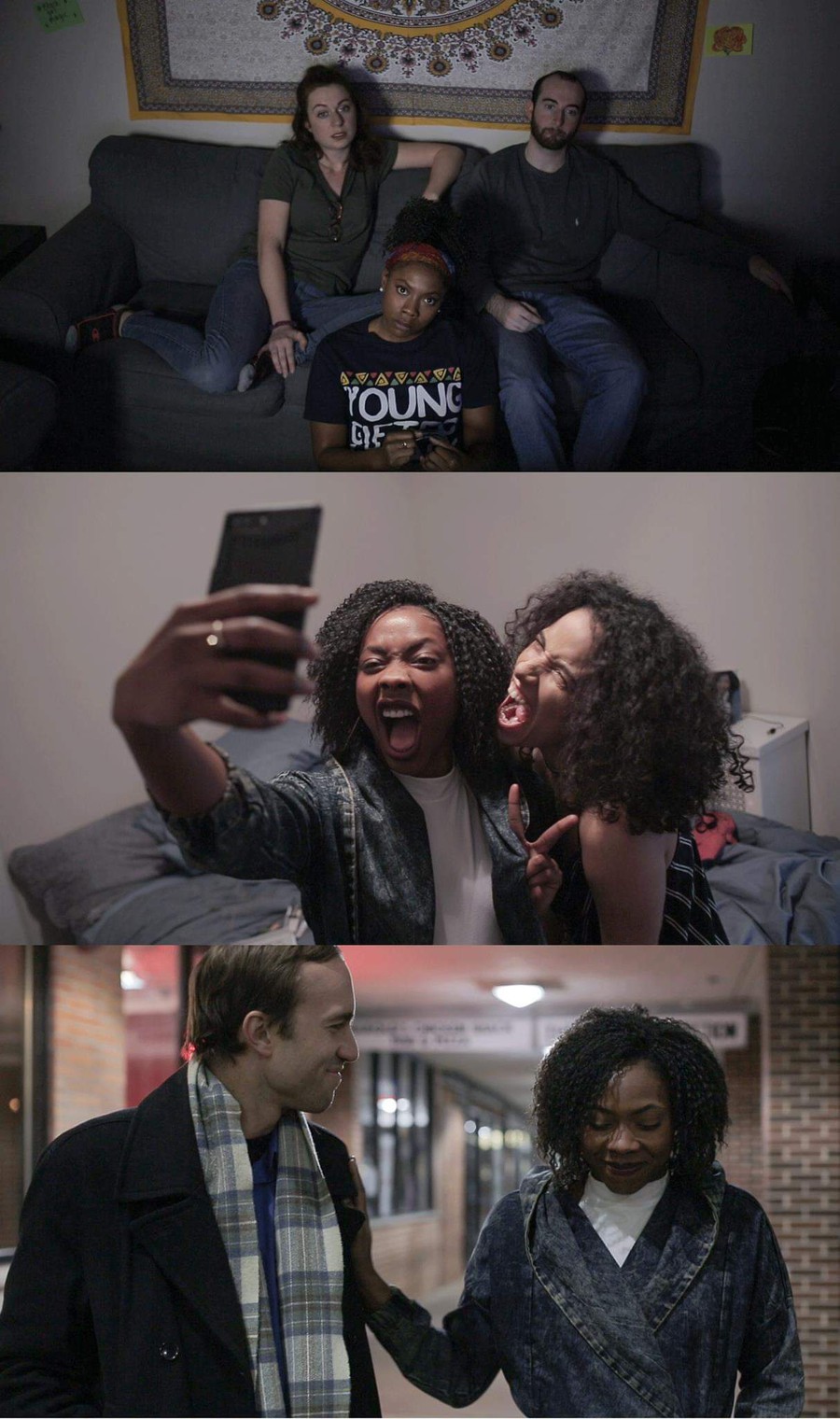 Writers' Room discusses the feeling of being the "unheard" minority in a predominantly white workspace.

“Unheard,” Amira’s voiceover states after a particularly frustrating scene in which her two white friends blame Black voter turnout for the election of a certain political figure, completely ignoring her attempts to interject. “An adjective that every Black woman has used to describe how she feels at a point in time.”

Through example after example of being “unheard”—from a bored coworker letting the elevator close on her face to a clerk ignoring her at customer service to help a middle-aged white woman instead—you get a strong sense that this show will not be taking prisoners.

Writer’s Room is a pilot written by fourth-year Sydnee Johnson, directed by second-year Nathan Kim, and produced by fourth-year Ben Levine from Maroon TV, UChicago’s own on-campus TV studio. It is the story of Amira (Iesha Rochelle), an African-American post-grad working as an assistant in the all-white writer’s rooms of an unnamed TV station. There, her boss Lynette (Ruth Kaufman), rejects her pilot scripts for being too “ethnic” and believes accusing someone of racism is worse than the act itself. After calling out a racist producer, Amira sees her prospects of writing her own show grow increasingly slim. She attends an art exhibit with her spunky friend Rose (Isaly Viana), where she meets and befriends Matthew (Gabriel Fries). After some initial distrust, the two bond over Harold’s and a mutual love of science fiction TV shows like Battlestar Galactica, and part on good terms. The next morning, Amira learns she is being moved to a staff writer position for the second season of a sci-fi show called Exodus, which is in danger of cancellation. Arriving onset while bemoaning her backfired attempt at asserting her voice, she is surprised to find that Matthew is an actor on the show.

As the first episode in a much larger project which I will be very keen to see in the future, Writer’s Room pulls off an excellent job at introducing the world of its characters. Amira is clearly framed as a Black voice trapped in a workplace of white people, and the viewer can’t help but feel her frustration at how the world treats people like her differently, demonstrated at its most uncomfortable level with a sequence where she is mistaken for a sex worker by a lecherous Uber driver. Rose, her “Afro-Dominican and proud” roommate, delivers as a comic foil to Amira’s straight man role, serving up brutal honesty about her friend’s position while also networking (and hooking up) at the art exhibit. Lynette brings a different kind of humor to the episode, familiar and relatable to people of color operating in white-dominated spaces.

However, Writer’s Room’s first episode does not quite work as a pilot. Although the show introduces its characters, I get the sense that we’re not seeing the general scenario the characters are going to be in: Changing Amira’s position and putting her on another writing team  after the pilot places her in a completely different scenario for the rest of the show, throwing gunk at the show’s established context. As a result, while we see Amira’s world, we don’t see the new workplace dynamic she will be in as a staff writer on a show in danger of cancellation. Likewise, Matthew, whom I presume is going to be a fairly major character, comes off as slightly flat. This episode merely serves as his introduction, but as a pilot selling a bigger show, we don’t get much from him—even if he’s not meant to be the most intriguing character, he’s clearly going to be part of the main cast.

As for the finished production, the pilot is a bit rough around the edges. Sound mixing as a whole was questionable, with music montage sequences blasting at least twice the volume of the characters’ voices in a prior scene. Sydnee’s script is full of biting political wit, but that does not always come through in the direction. At times the editing underplays the humor of scenes, particularly those involving Rose. If the end goal is to bring this show to any major networks, this pilot needs quite a bit of polish.

But as a whole, Writer’s Room’s pilot makes a strong case for a future production. There are few stories in popular media that depict the difficult world of navigating predominantly white institutions as people of color. And while there are certainly several shows that have helped revolutionize depictions of the experiences of people of color with actors of color portraying them, few people realize those shows still have largely white writer’s rooms. This pilot gives us an intriguing peek into that world, and a strong statement that, even as we take steps towards diversifying the TV landscape, we still have a long way to go. I for one would be very happy to see further episodes of Writer’s Room produced, and I believe all consumers of television could benefit from watching this pilot and the full series, should it ever be released.