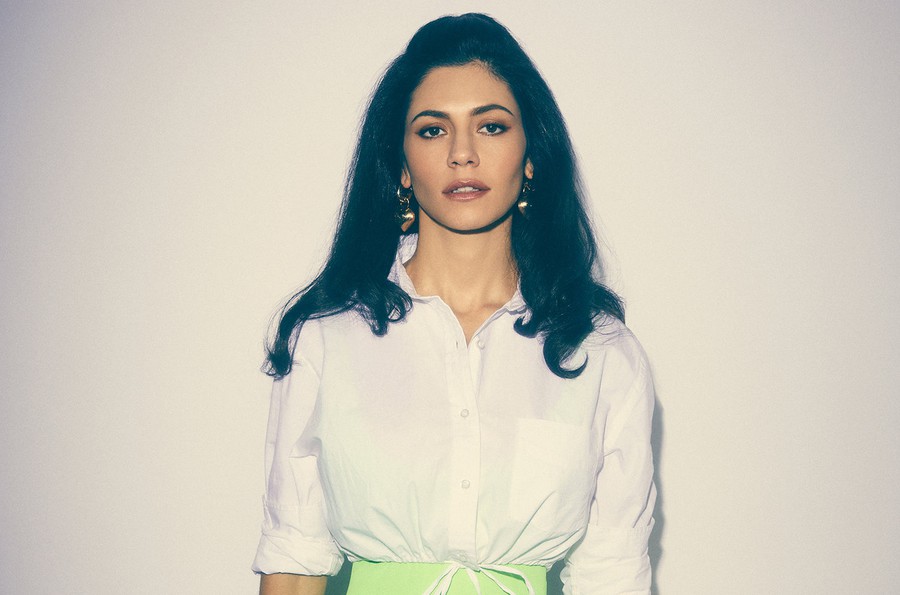 The title of Marina Diamandis’s fourth album Love + Fear originates from Elisabeth Kublër-Ross’s theory that humans are only capable of experiencing two primary emotions: love and fear. The album is split into two sides, each named after one of the two emotions.

This album comes after a long break and period of self-discovery for Marina, who has said in interviews leading up to the release that she felt like quitting music after the conclusion of the tour for her 2015 album Froot. During this hiatus, Marina also changed her stage name. While she previously went by Marina and the Diamonds, with “the Diamonds” representing her fans, Marina dropped “the Diamonds” from her name last year, saying in an interview for Dazed that she felt too much “of [her] identity was tied up in who [she] was as an artist…and there wasn’t much left of who [she] was.”

Thus, this album in many ways represents a rebirth for Marina, as she returns to music with a new stage name and a reinvigorated passion for music. The lead single and first song on the album, “Handmade Heaven,” certainly reflects that. In it, Marina daydreams about a paradise with a new, dreamier feel that differs from her previous work.

The positivity reflected in this song effectively sets the tone for the first half of the album on Love. Throughout these first eight tracks, Marina explores various aspects of love, from romantic love to love of her home to self-love. Some of these songs work better than others. “True” and “Superstar” stand out as two missed opportunities, only superficially touching upon their central topics, and featuring lyrics that never extend beyond cliché. However, other songs such as “Enjoy Your Life” and “Orange Trees” are simple but powerful odes to both self-love and Marina’s love for her home.

Despite a few flaws, the bright and sparkling production and catchy melodies make the Love half of the album an enjoyable listening experience. Its songs conform to mainstream, upbeat pop more than Marina’s past releases. Nevertheless, Love still manages to feel uniquely Marina, with the inclusion of tracks like the excellent “To Be Human.” The track features some of the album’s best lyrical moments, such as the line, “People driving fancy cars look like beetles to the stars/ The missiles and the bombs sound like symphonies gone wrong,” which harken back to the more complex and thoughtful lyrics of her previous albums. The track effectively rounds out Love’s nuanced exploration of various aspects of love by zooming out to examine human love on a larger, broader scale.

The second half of the album, Fear, is naturally darker than the first half due to its focus on self-doubt and anxiety. In this way, it feels more similar to some of Marina’s older work, which has never shied away from tackling such topics. However, in Fear, Marina’s handling of these issues doesn’t feel as nuanced as it did in the past. Although there are some great highlights, such as “Too Afraid” and “Life Is Strange,” both of which effectively paint portraits of self-doubt and how fear can hold people back, there are some notable duds in the Fear half that don’t fit well with the concept of the album. For example, “Karma” is billed as a response to the #MeToo movement, yet it doesn’t have much to say on the movement beyond its refrain, “I think it’s karma.” While catchy, the song doesn’t possess much substance. Furthermore, the fact that these songs only loosely relate to the concept of fear underscores how the second half of the album struggles to present as complex a portrait of fear as the first half does of love.

Despite some of Fear’s weaker moments, the quality and cohesiveness of the album’s production still serve to make it an enjoyable pop record. The album closes with “Soft to Be Strong,” which successfully ties up the album’s thematic elements as Marina intones that she feels “the fear is gone” and reclaims the love from the first half of the album.

Marina’s Love + Fear is yet another strong album from the artist; however, it doesn’t live up to its concept as well as some of her previous works due to weaker lyrics. One of Marina’s most appealing aspects as an artist has always been her introspective and unique lyrics, making it disappointing that some of the songs on this record feel like they could have been written by anybody at all. All of the tracks on this album are well-produced, and the talent of the songwriters shows through the catchy and memorable melodies, so it’s a shame that some of them feel so empty at their core.