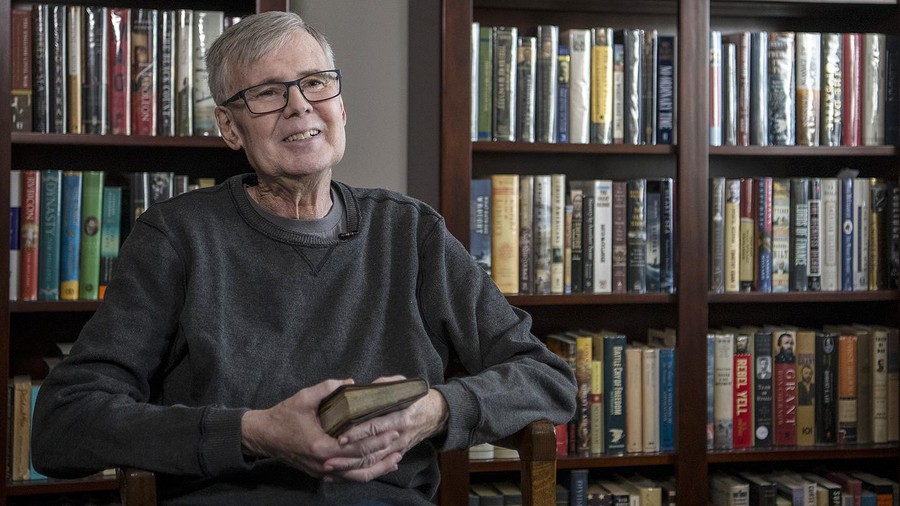 Bob Connors has amassed a collection of 400 rare volumes, which he has donated to the University of Chicago Library's Special Collections Research Center.

When Bob Connors walked into the University of Chicago’s Graham School—a graduate school that also holds classes for adult education—about 40 years ago, he wasn’t sure what to expect. As opposed to sitting on the couch scrolling through television channels, Connors hoped to fill his evenings after work with a discussion-based literature course.

Shortly after enrolling in his first UChicago class, a course on Thomas Hardy (one of Connor’s favorite authors), he wandered into an old used-book store in York, England. Soon, he was enraptured by the store’s several collections of old books. One, a 200–300-year-old edition of Gulliver’s Travels, priced at about $80. The others, several Thomas Hardy books, were priced at two to three thousand dollars.

“I went ahead and I bought the Gulliver’s Travels and I brought it home, but after I thought about it for a while I thought ‘what the heck,’” Connors, a retired lawyer, said. “I got ahold of that bookstore and struck up a relationship with that guy. He sold a lot of books to me of his own stock, everything he had.”

Now 70, Connors has amassed a collection of 400 rare volumes that include works ranging from a 1475 edition of Saint Augustine’s Confessions, to Boethius, and Herodotus, to the British literature of George Eliot and Thomas Hardy. Since enrolling in the Graham School’s master’s degree program, Connors has taken several classes in the school’s Basic Program of Liberal Education for Adults to foster his love of books.

After Connors was diagnosed with cancer in October, he decided to donate his cherished collection to the University of Chicago Library’s Special Collections Research Center (SCRC), along with a monetary donation to the Basic Program.

“It’s the institution I thought would be the best able to protect the collection, and make it available to scholars,” Connors said. “Nothing would make me happier than for some scholar to look at these books and to learn something new from them. I don’t want to lock them away where nobody can see them; what’s the point of having them then?”

Elizabeth Frengel, curator of rare books for the SCRC, was not sure what to expect when talk first began of acquiring the Connors collection, but she was surprised by the collection’s quality.

“An incunabulum is a term used by librarians, book historians, and printing historians to describe books that were produced in the infancy of mechanized printing,” Frengel said. “By gift or by purchase, it is very seldom that we acquire books that represent this early period of printing, but he’s given us 12 incunable titles so far. That’s a huge number, all of them printed before 1501.”

However, this is not the only rarity of the collection.

“As a collector, when I see someone who has written in a book, that’s usually a bad thing, but one thing I’ve learned from Elizabeth is ‘no, that’s okay,’” Connors said. “Typically, if the book’s old, that’s a good thing because the people writing in those things were often scholars, and you can learn valuable things about how the scholars back then view the books—how did a scholar from 1502 react versus a scholar from 1602, or 1702? The old writings are useful to scholars.”

“I think that the University of Chicago’s library was the ideal place, both in terms of their appreciation for [the books] plus their ability to store and protect them, but at the same time make them available to scholars,” Connors said. “It just seemed like the perfect place. I’m very happy to have them there. I can’t imagine a better place.”