Original Bequest Letter for Yerkes Observatory Holds Up Its Future 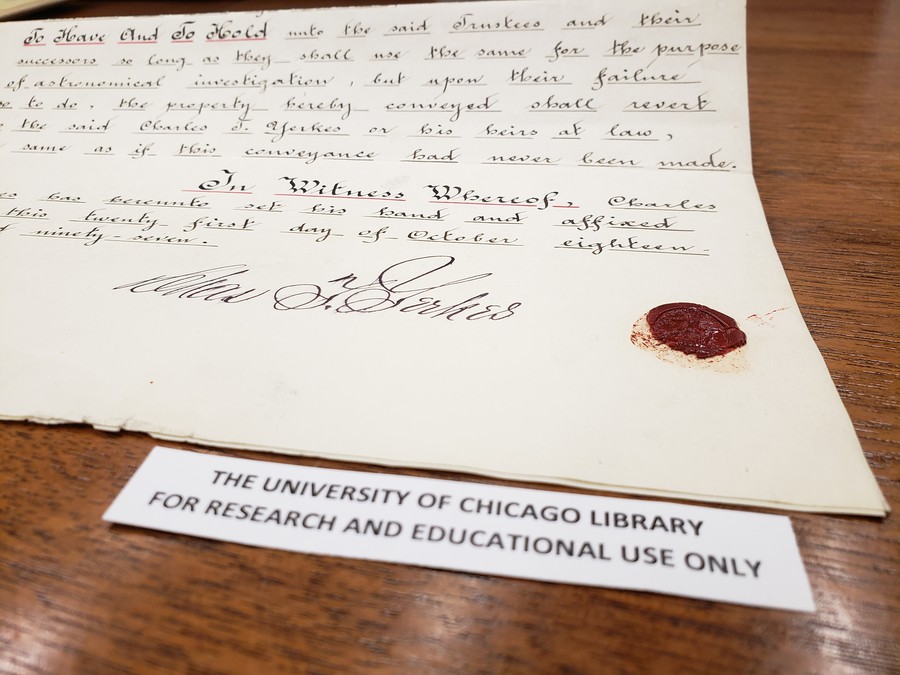 The future of Yerkes Observatory remains uncertain after its recent closure by the University, which has activated stipulations put in place by the observatory’s primary funder that could revert ownership of the observatory and its telescope to his descendants.

In 1892, financier Charles Yerkes agreed to endow an observatorythat planned to host the world’s largest refracting telescope. The official endowment letter Yerkes wrote to the University of Chicago is dated October 21, 1897, around the time that the observatory opened.

The original slightly damaged, wax-sealed bequest letter is held in the University Library’s Special Collections as part of the Board of Trustees Correspondence of the Secretary Records 1890–1960.

The document’s key phrase is a clause that says the University will own the telescope and observatory “so long as they shall use the same for the purpose of astronomical investigation, but upon their failure so to do, the property hereby conveyed shall revert to the said Charles T. Yerkes or his heirs at law, the same as if this conveyance had never been made.”

In a press release on November 30, 2018, the University acknowledged the letter, after its existence was first reported by the Geneva Shore Report.

The University said that it “will continue ongoing talks about the observatory’s future with interested parties, including representatives of Charles T. Yerkes’ descendants, the Village of Williams Bay, and the Yerkes Future Foundation.”

This is the first announcement from the University saying they will speak with representatives of the Yerkes family. Previously, the University had confirmed talks with the Yerkes Future Foundation (YFF) and with Williams Bay. The YFF is comprised of a group of residents from the Williams Bay area who submitted a proposal for reopening the observatorywhen the University was calling for “expressions of interest.” Details of the proposal have not been disclosed.

The University also said that the bequest letter only concerns “the main observatory building and refracting telescope.” At the time it did not reveal the names of the Yerkes descendants, “out of respect for the descendants’ wishes.”

YFF chair Dianna Colman said that the reversionary clause written into the bequest is currently slowing down the discussions surrounding observatory’s future.

"I am a firm proponent of being respectful of the heirs,” she wrote to The Maroon by e-mail. “Do I think it will eventually all work out—yes. But, will it be soon—I don’t think so."

In a follow-up phone interview, Colman said that most states have a sunset law that applies to bequests, where after a certain number of years, the clause is no longer considered valid. But the state of Wisconsin does not have such a law.

Thus, the observatory title must revert to the descendants of Charles Yerkes.

Lee Fennell, a professor at the University of Chicago Law School who is an expert in property law, confirmed the legal status of the bequest, by e-mail that the language of the document indicates what could happen with this type of bequest if the condition written in it was broken.

“The language of the gift appears to create a fee simple determinable (in the Trustees and their successors) accompanied by a possibility of reverter (in the grantor or his heirs),” she said. "A fee simple determinable is a type of defeasible [able to be reverted or forfeited] estate that terminates automatically when a stated condition is broken, and the possibility of reverter is the accompanying future interest, which becomes possessory once the condition is broken."

She added that Wisconsin’s laws dealing with estates and future interests do not appear to place a limit on how long a reverter applies.

Because Yerkes’s heirs to whom the property would revert can be identified, they could make a voluntary deal with the University and thus circumvent the reversion clause, Fennell said.

Colman said that discussions with the heirs are mainly being held by the University, and that the YFF is not involved. However, she said, the foundation has still made progress on possible plans for the observatory, and is consulting experts in educational programming, science installations, and observatories.

“We have to do it in a very measured-pace approach, because we don’t want to spend tons and tons and tons of money if we’re not going to end up being the new steward of the observatory,” Colman said.

“We’re still very interested in making sure that it works for the community here, for the science and educational community at large, and also for the [Yerkes] family,” she said. “I mean, we don’t want them to feel estranged from the place, because it is part of their legacy and heritage.”

Colman said she has spoken with one of Yerkes’s heirs and hopes to speak with more family members in the future. She initially declined to identify any of the descendants or to reveal any details of the discussions, but after speaking with The Maroon, the Lake Geneva Regional News ran a story about the letter in which Colman identified the family member as Susan Yerkes of Texas. The paper confirmed her as one of Charles Yerkes’s descendants who is in contact with the University; Colman confirmed talking with Yerkes in a follow-up e-mail to The Maroon.

The Lake Geneva Regional News identified another heir as Cindy Strecker of Louisiana. Other descendants of Yerkes who might be involved have not been identified publicly.

Neither Yerkes or Strecker responded to a request for comment in time for publication.

In a statement to The Maroon, University spokesperson Jeremy Manier reiterated that the University has been in ongoing talks with the descendants of Charles Yerkes and the YFF.

“We hope to proceed soon to the next stage of evaluating options for the long-term operation of the Yerkes campus, with the understanding that comprehensive plans likely will require coordination among numerous stakeholders,” he said.

This article has been updated to correct a misspelling of Fennell's name and to clarify the nature of her remarks to The Maroon.

Yerkes’s Brighter Future: University Enters Agreement to Give Over Observatory to Local Foundation