Ricky Novaes Doesn't Want to Write the Next Harry Potter 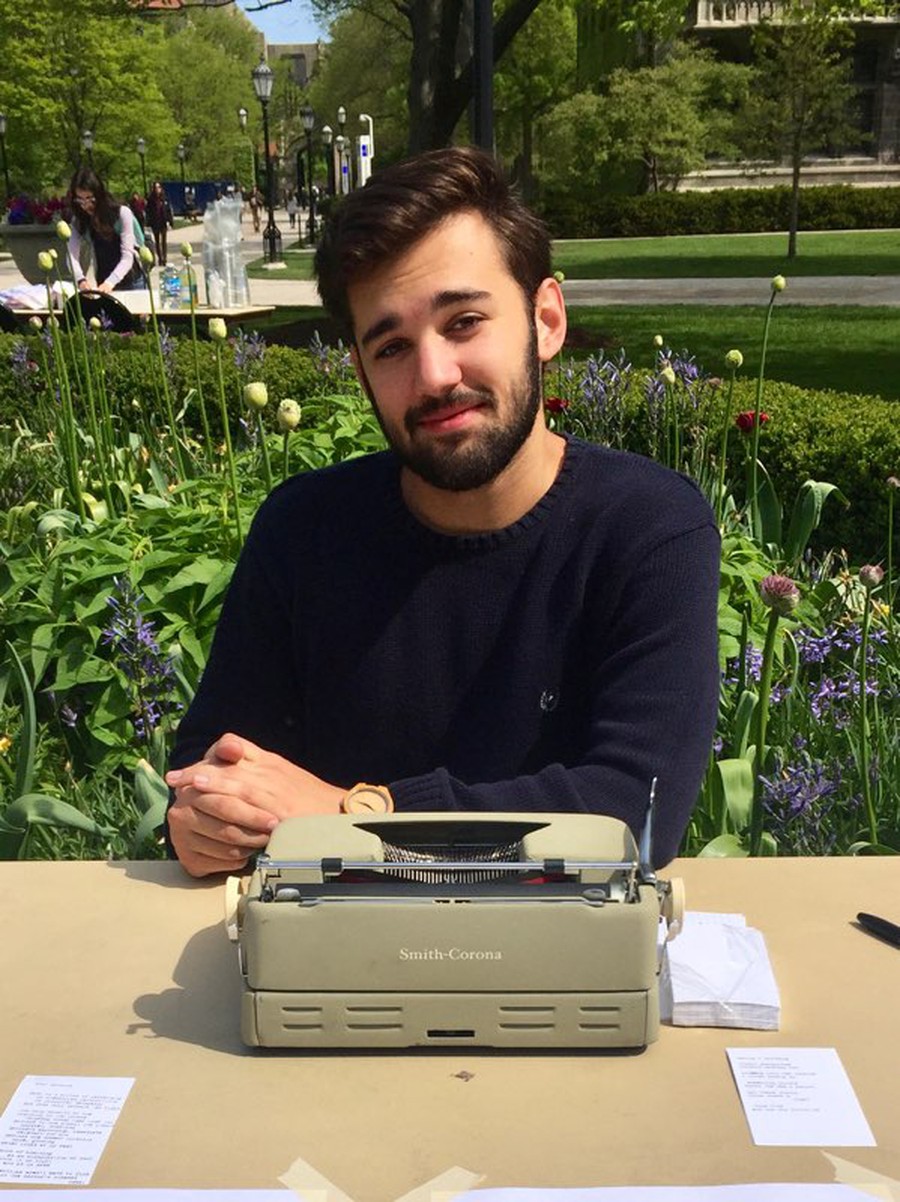 Fourth-year Ricky Novaes declared his double-major in political science and creative writing, the latter driven by his love for the spontaneity and beauty of poetry.

When it began in the fall quarter of 2017, the creative writing major was one of the newest majors to be offered as an undergraduate concentration. Blending literature with the opportunity to share original creations, students in the field enjoy workshops, seminars, and projects considering contemporary culture. Fourth year Ricky Novaes, a poet and typewriter-owner, declared his major in creative writing after treading the waters and falling in love with the artistic freedom encouraged by the program. The Chicago Maroon sat down with Novaes to discuss his time at UChicago, his inspirations for his B.A. thesis, and his hopes for the future.

Chicago Maroon: First off, congratulations on completing your creative writing major here at UChicago! Creative writing was a newer department around here, so what attracted you to the major?

Ricky Novaes: Coming to Chicago, I wanted to study English. I took a bunch of English classes to feel it out. I mean, I love English, but I felt a lot of the time that I was really being led certain directions with whatever book we were reading. The professor would ask questions knowing what answer they wanted. And then it felt sometimes I couldn’t give my full reading of a book. I’ve always liked to write, and I am a journalist. I felt like I wasn’t really doing what I wanted to do. [Writing] massive analytic papers that are scrutinizing different parts of what we read didn’t really appeal. I just wanted to write whatever I wanted to. And at this time, when I was a second-year, creative writing was a minor. So, I wanted to try out something in the minor. The end of my second year, they created the creative writing major. So, I took Beginning Poetry Workshop as my first class. Just to feel it out. And I loved it. The professor was amazing, the class was amazing, and the books we were reading made me want to write.

CM: Was there anything special about the creative writing program that stood out to you, besides the fact that it gave you more freedom to write whatever you wanted?

RN: Each class is small. Like, dramatically small. UChicago likes to talk about small class size in general, but creative writing classes are like, eight people, 10 people max. And you really get to know every single classmate, not just from being with them weekly, three hours at a time. Just from the act of writing and sharing with other people, you get to know everyone really well…. I also like how the classes are structured. Half the time [is] about what we read, what the author intends, why what they are doing is good. The other half of class, we share our own writing…. There’s so much freedom.

I very much felt self-motivated too, and got back a lot of strong criticism…. There was a self-guiding voice always leading me, telling me to do my best and accept the feedback, take time to grow. It’s a major that is driven by passion. I’m also a political science major—which is super different, I know. Political science is for employment reasons. Nobody does creative writing for a career! [laughs] Joking. Really, though: It’s about wanting to write better, just doing what I love.

CM: What was the hardest part of being a creative writing major?

RN: I always had to structure my class schedule around what creative writing classes were on the catalog. One or two required creative writing classes were always there, and there were workshop requirements and tech seminars. But there’s usually only one workshop and one tech seminar per quarter. There’s not a lot of classes to choose from yet, and I can’t just say, “This sounds interesting, I’ll take it later,” because I didn’t know if there was a “later.” Whatever is offered, I’m taking. So, I’d be like, “OK. This is the class I need to take. I need to pivot the rest of my schedule around this.” I really wanted to study abroad, and I did, but I ended up doing it over the summer. So yeah, it’s definitely a bit rigid.

CM: Were you at the Expose Art Fair?

RN: I was! I was doing my own thing, as I always do. I wrote a B.A. thesis for creative writing, which was a collection of poems I’ve written over my time here. The thesis itself was 10 poems. I made small booklets of my poems, around four in each. I also have a typewriter, so I was writing poems for people on the spot.

CM: What drew you to poetry? Do you have any inspirations?

RN: The first poet I remember being inspired by was Walt Whitman. I read him in fifth or sixth grade, during a poetry unit. I think my favorite poem from him was “When I Heard the Learn’d Astronomer.” For as long as I can remember, I could recite the last line of the poem. That’s the beauty of poetry. Other writings, you have to see the whole picture to understand it. You’ll have to remember characters, plot lines, and everything. Poetry, it’s about certain lines, certain words. I enjoyed writing, like in journals, and writing how I felt—being creative and making something out of it. That really led to poetry for me.

There are only two poetry majors in creative writing! We each have to choose a track: poetry, fiction, or nonfiction. There’s 40 or so of us graduating this year as seniors. I guess everyone else wants to write the next Harry Potter. [laughs]

CM: Are there any specific lines that you loved in your B.A. thesis, like, “This is the most fucking awesome thing I’ve ever written!”

RN: I never thought about that! I wrote a haiku after my adviser suggested it, to tie everything in my thesis together. I loved writing it. The title is “Return with Flowers.” There’s not a lot of talk about flowers in the overall thesis, but it really made sense in that poem specifically. The last line is “And everyone you pass on the street.” A lot of it is about simultaneity, how living in the city with other people is like living your own life, but a life with everyone in the same space, when you’re reading, listening to music, in class. How do you find your own life when everything else is going on at once? Looking back at the thesis, I liked different parts of it, and they’re all flashing at me now. But I was happiest with that haiku.

CM: What was the focus of your B.A. thesis? Did you just write about whatever came to mind?

RN: The poems come from all throughout the creative writing major. There’s a poem in there I wrote my second year. There’s a poem I wrote this quarter in there. But the main theme was modern life and what it is like to live in the city. There’s a lot of meditations, like “On the Bus,” which was me commuting from work to home, seeing a homeless guy in the back of the bus, what it means to live and work, what it means to have people always surrounding you. I write a lot about music, and I love to weave it into my works. A poem called “Earworm” is all about how a song that is stuck in my head is a memory that is trapped in my head that loops and repeats. I started off with talking about the city in my thesis and moved later to more personal reflections on family and family life. I tried to bring that all together with a sense of the modern world and its hectic and crazy features. There are many things that return me to the same feelings, and I tried to write in a way that you can return to that moment. Amidst all the chaos, I ground memories in writing and music.

CM: What advice would you give to creative writing majors?

RN: Don’t hold back with your writing. I think a lot of the time, I felt the need to write a certain way, or be the next Walt Whitman. I need to be this grandiose. Or, stuff like Instagram poetry, which my sister sends me all the time. It’s stanzas like “We drank whiskey/ and I knew pain.” God, that’s so lame! So boring! So, part of me thought I realized that I need to be dense and write about intelligent things. But then other times, I feel like I’m trying too hard to sound like Walt Whitman. The ultimate goal in writing is to find your own voice! That’s really hard to do. The best way to keep approaching this is to just write the first things that come to mind. Write down all the thoughts you have and go back to it and edit. Always be writing!

I write on my phone a lot on my notes app. I always wrote on the bus ride downtown, the bus ride home. I walk around and write; in my free time I write. Just jot things down! Two lines, three lines. Words that you really like. I did that for an entire summer while staying in Chicago and continued all quarter.

One of my finals in a creative writing class was a 20-page assignment of literally anything. It sounds daunting, but I took what was in my notes app and just pasted it. It was 30 pages long. Of course, after some editing and taking out all the dumb stuff, it became 20 pages. It all just sprung from my spontaneous writing, writing in the moment on my phone. To new writers out there, make writing your life.

CM: Have you thought of your future as a creative writer?

RN: Yeah! I’m going to be in Teach for America next year, as a creative writing and English instructor! I’m teaching 12th grade English, which I don’t feel qualified for. But that’s OK. I’m so excited for it. And the creative writing class was totally unexpected. I knew I was going to teach English, but they also threw in creative writing. I think I’ll teach for two or three years, and then decide if I want to go to law school or get a creative writing master’s degree. We’ll see.