Team of the Year: Men's Tennis 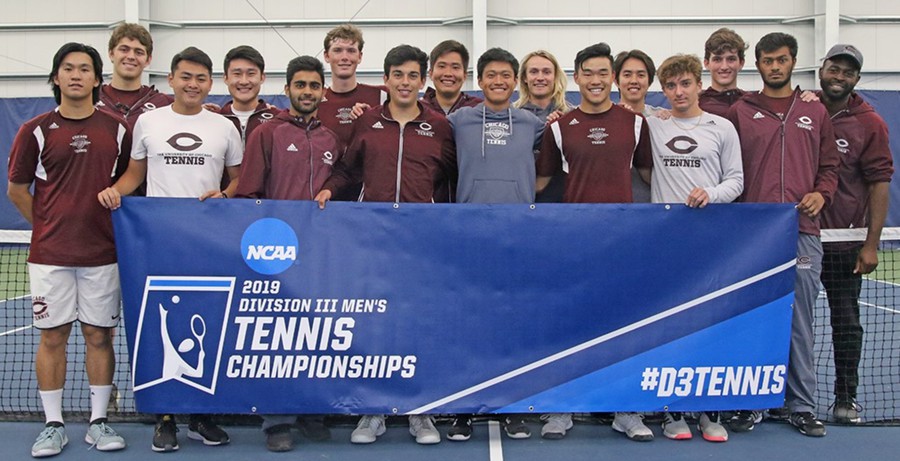 The 2019 season proved to be an excellent one for Maroon tennis. Over Memorial Day weekend, third-years Erik Kerrigan and Ninan Kumar performed brilliantly for the University of Chicago at the NCAA Division III Singles and Doubles Championship, winning two matches—first against Claremont–Mudd–Scripps, then against the University of Redlands—to qualify for the semifinals. There, the Maroon duo fought valiantly against Bowdoin College, seizing the first set and losing the second before ultimately falling in a nail-biting 6–4 third set. Despite the heartbreaker suffered by men’s doubles, Maroon men’s tennis had much to celebrate over a storied year.

A Maroon doubles team made it to the semifinals of the NCAA Division III Singles and Doubles Championships: no small accomplishment at the invitation-only tournament to which six Maroons were afforded invitation. The Maroon roster was bestowed with three All-Americans honors: one for Ninan Kumar, in doubles, and two for his duo partner Kerrigan: one in doubles and one in singles. And the fact that the Maroon men made it to the semifinals of the NCAA Championship last week before falling to Claremont–Mudd–Scripps is worth celebrating as well. Returning to the regular season, the Maroon men recorded a fantastic record: 20 victories to three losses. But perhaps more importantly, the Maroons have much to celebrate as they prepare to bid farewell to a stalwart set of three fourth-year performers.

Men’s tennis prepares to first bid thankful farewells to Max Liu and Jonathan Li. The pair proved effective on the tennis court, with a 22–9 singles and a 20–9 doubles record and a 11–3 singles and 2–1 doubles record, respectively. Both were also excellent students, making UAA All-Academic every year they were eligible.

Yet out of all of the team’s accomplished Class of 2019, the leader is undoubtedly Charlie Pei, who, over a four-year career, amassed a deeply positive record: 56–22 in singles and 48–20 in doubles. Yet, numbers alone fail to tell the whole story. His skill on the tennis court meant he was honored as a UAA Athlete of the Week multiple times, and, as a third-year, Pei was further selected as Second Team All-UAA and given an invitation to the UAA All-Tournament Team. A prolific student as well as an athlete, Pei was named UAA All-Academic Team every year he was eligible. He was further honored as an ITA Scholar-Athlete as a third-year, cementing his status as a model Maroon student-athlete.

Perhaps stronger than the inevitable bittersweet emotions of farewell, however, are the joys of anticipation and hope. Maroon men’s tennis leaves the 2019 season with an accomplished and battle-tested cast. This year’s two All-Americans and the Maroon’s top performers at both the NCAA Championships and NCAA Singles and Doubles Championships, Kumar and Kerrigan, are only third-years. If these third-years’ excellent season is anything to build on, the Maroon’s opponents have much to worry about come 2020.

Further down the roster, promising young Maroons await their turn to dominate. Second-year Jeremy Yuan was named First Team All-UAA in singles this season, an honor that sits high among others: ITA All-American in doubles; NCAA national qualifier in single; three-time UAA Athlete of the Week; ITA Central Region doubles champion; and ITA Central Region singles finalist. Also exciting was first-year Alex Guzhva’s inaugural season for the Maroons: 21–7 in singles and 4–2 in doubles, a performance that won him Second Team All-UAA in singles. And if Guzhva proved a singles phenom, fellow first-year Joshua Xu matches his skill in doubles, winning 25 of 31 of those matches with partner Pei. For good measure, Xu also won 18 of 22 singles matches. For his performance, Xu was named Second Team All-UAA in both Singles and Doubles and was named UAA Rookie of the Year. As these already-accomplished first and second-years matriculate, one expects that they can only grow deadlier, making the Maroons even more potent than they were this year.

Though successful in its own right, the Maroon men’s tennis’ 2019 season was most exciting for the promise it foresaw. If ascendant first, second, and third-year Maroons continue their rise—and if next year’s first-year class is as good as this year’s—the 2020 season may end with the Maroon men mounting the top step of the podium at the NCAA Division III Championships. Such an honor is one long awaited, and now, at last, it seems within reach.