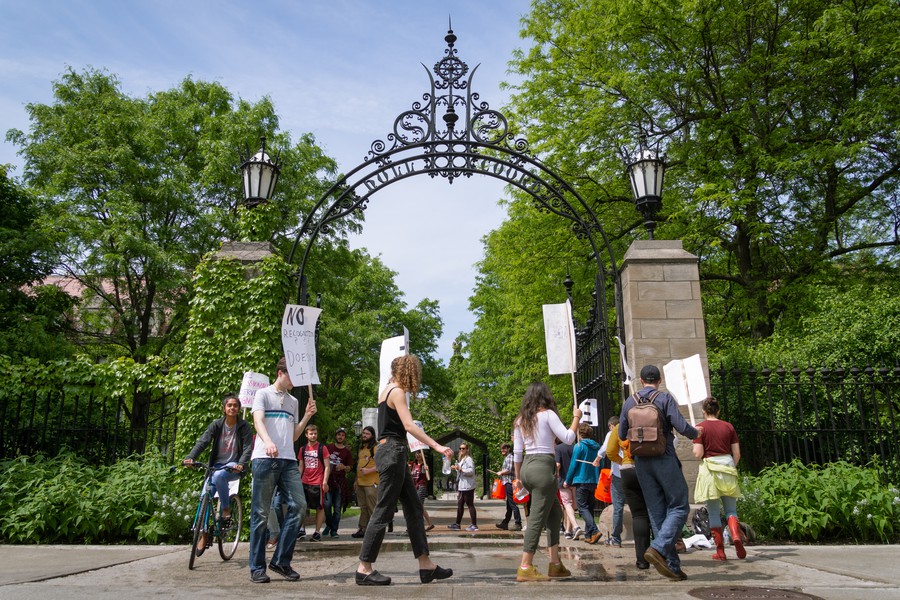 Protestors picket at Hull Gate on the second day of GSU's industrial action.

This article was updated Thursday, June 6 at 12:00 p.m. with new information.

Graduate Students United (GSU) concluded three days of striking after members voted to end their labor action on Wednesday night. The labor action aimed to gain the University's voluntary recognition of the union, which graduate students voted to form in October 2017.

Though the University of Chicago's administration has not recognized the union, GSU organizers characterized their strike as a success.

In a tweet announcing the vote, GSU said, “After much discussion, GSU members voted tonight to conclude this week's successful job action. This was the largest action in our union's history, one of the largest labor actions at the [University] in decades.”

The University could not be reached for comment by the time of publication.

The strike, which began on early Monday morning and lasted through rain and sunshine, drew over 400 supporters by Wednesday afternoon.

Read our full three-day coverage of the strike here.

GSU garnered support from beyond the University’s campus and surrounding areas. On Monday, presidential candidate Bernie Sanders (A.B. ’64) sent an email to campaign supporters expressing his support for GSU and urging his Chicago-area supporters to attend GSU’s rally on Wednesday afternoon.

Labor organizations—including the Screen Actors Guild and the American Federation of Television and Radio Artists, the American Postal Workers Union, and the International Brotherhood of Electrical Workers Local 134—also sent in letters of support. GSU co-president Claudio Gonzáles presented the letters in a Wednesday afternoon rally.

Faculty reactions to the labor action were divided. Some professors proceeded with classes as usual, while some moved classes off-campus to prevent students from crossing picket lines, and some entirely cancelled classes and joined picket lines.

On Thursday morning, University Provost Daniel Diermeier emailed all members of the University a message on graduate student unionizing—an e-mail apparently in response to the three days of picketing and work stoppage by GSU, although Diermeier did not reference the group by name, referring only to "some graduate students."

In the e-mail, Diermeier reiterated the University's stance on unionization, saying that a graduate students' union would "fundamentally alter" graduate education. He also referred to the work of the Committee on Graduate Education, which released a report in April assessing Ph.D. education nationally and at the University of Chicago. Following the report, Diermeier wrote, "various schools and divisions are considering enhancements to student financial support, such as sixth-year funding. Such improvements may have to stop if the University were to recognize a union."

On Twitter, members of GSU reacted to the email. Some interpreted Diermeier statement as a threat. "To villify @uchicagogsu, the university is gesturing to hold necessary and ethical improvements to grad life hostage if unionizing is recognized," one GSU member wrote.

Very cool to wake up after three energizing days of picketing to an explicit threat from your university. https://t.co/pLIqd36ggB

Hundreds of Protesters Picket Through Rain and Shine: Three Days of Strike

Union members, faculty, undergraduates, and supporters from beyond campus, gathered for the Monday through Wednesday strike.