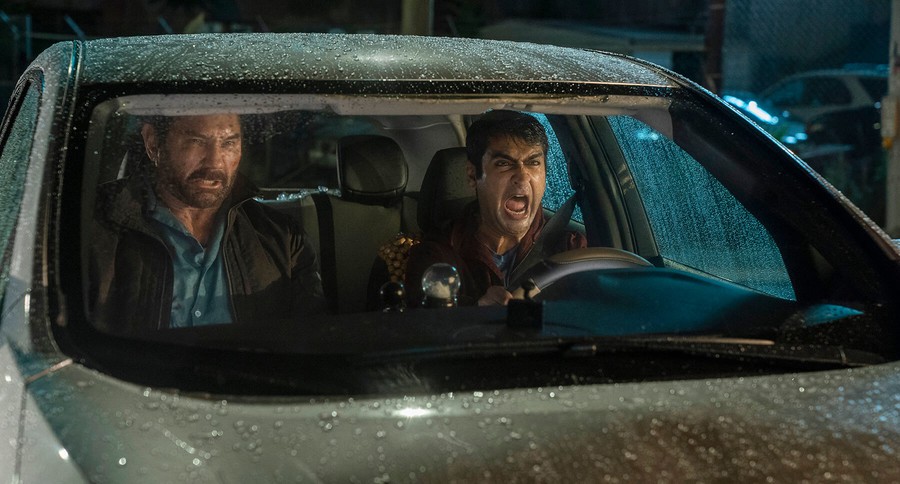 Dave Bautista and Kumail Nanjiani have great comedic chemistry, in the same vein as Arnold Schwarzenegger and Danny DeVito in "Twins", or Channing Tatum and Jonah Hill in "21 Jump Street".

Lately, the entertainment industry has seemed to be obsessed with using technology as a subject, to varying degrees of success (think Black Mirror, or The Emoji Movie). The latest addition to this trend is Stuber, the buddy “cop” comedy starring Dave Bautista (Guardians of the Galaxy) and Kumail Nanjiani (The Big Sick, Silicon Valley). The duo play a temporarily blinded cop (Bautista) named Vic (who just got Lasik surgery) who teams up with a reluctant Uber driver (Nanjiani) named Stu (Stu + Uber = Stuber.  Get it?) to get revenge on a criminal who has been evading Vic for years. Batista and Nanjiani have great comedic chemistry, in the same vein as Arnold Schwarzenegger and Danny DeVito in Twins, or Channing Tatum and Jonah Hill in 21 Jump Street. Their performances were the highlight of the movie, and I would like to see them work together again sometime.

Ultimately, however, the writers failed this promising duo. At times the violence is excessive to the point of being boring and detrimental to the pace of the plot. There are also too many unnecessary layers to the plot. Who decided it was necessary for Vic to be blind for most of the movie? Did Stu really have to be an Uber driver, or was this whole movie just an advertisement? The overall plot and many of the jokes hinge on Stu’s desperation for a five-star rating on Uber, which I ultimately didn’t think was very funny; what does the fact that he was willing to risk his life maximizing earnings at his night job say about our society? Ultimately, there were some funny moments, but for the most part they were overshadowed by a bulky plot and a little too much violence.

After seeing Stuber, the Maroon was given the opportunity to sit down and talk to Dave Bautista and Kumail Nanjiani, the stars of the film.

Chicago Maroon: This question is for Dave.  Lately there’s been a trend of guys going from wrestling to making movies. And I’ve seen in other interviews that you don’t like that kind of comparison.

Dave Bautista: Haha! The back of my neck’s already swelling up.

CM: I know you don’t like that comparison, so my question is what sets you apart from those guys?

DB: Well, this is always a tough conversation for me because I try to have this conversation without sounding disrespectful to anyone else. But I think, and again I don’t know, it's all speculation, it's what I perceive to be their goals and my goals. And my goal is really just to be a good actor. That’s all I really care about, and everything else has been kind of a side effect of that. I had a lot of success because of my role in The Guardians of the Galaxy, financially as well as professionally, but that was never my goal. My goal was to be a working actor. From the conversations I’ve had with other people that are trying to go into the film stuff from that wrestling background, I think they are more concerned about, you know, big blockbuster movies and being a movie star, and that was never my goal. It’s still not my goal.

CM: So it's not about the money for you?

DB: It’s definitely not about the money for me. Financially I’m doing good. I’m making more than enough in films. But I want to do smaller roles that are fucking meaningful, man. That’s what I’m really after. Like I said, the other stuff is a side effect. That’s why I just don’t like to be lumped in with anybody. Because I don’t think we have the same goals. At least not from what I’ve seen. And again, I don’t want to sound like I’m judging people, but I kind of am. I don’t want to be lumped in with them, I just want to be an actor, a good actor, the best actor I can be. And I want to work with good actors and directors…. Someone made this comment to me, and I’m stealing this, but someone said the thing that would set apart…and I hate to name people because it sounds like I’m bad-mouthing people. But, my character in Blade Runner 2049...could you see either Dwayne Johnson or John Cena playing that role? Probably not…. I think that’s what’s going to set us apart.

CM: Kumail, last year you were one of the TIME 100: Most Influential People under the Pioneer section. Is there anything you want to say about representation in Hollywood? I know your culture is important to you and was wondering if there’s anything you’d like to say about that.

Kumail Nanjiani: Diversity obviously is very important. It's important for people to see themselves on screen. But I also think it's very important behind the camera and I think that’s sometimes not discussed as much. We want to see directors and writers from different backgrounds because I think those stories are interesting to everyone. I mean, if you look at some of the huge hits of the last couple of years, there have been movies from traditionally non-mainstream pop-cultural perspectives. Those movies have been very, very successful. People don’t want to just see their own experiences, people want to see other people’s experiences as well. So I think we’ve made some progress, but I think there's a long, long way to go with that. But I don’t think it's just important from a societal perspective; I think it also makes people money, so let's do that!

DB:  I think it's an understatement that when people see something from someone else’s shoes it gives a whole different outlook on things.