The University of Chicago Democrats held a "mockus" Monday night, where Senator Bernie Sanders came out on top with 47 percent of the crowd. 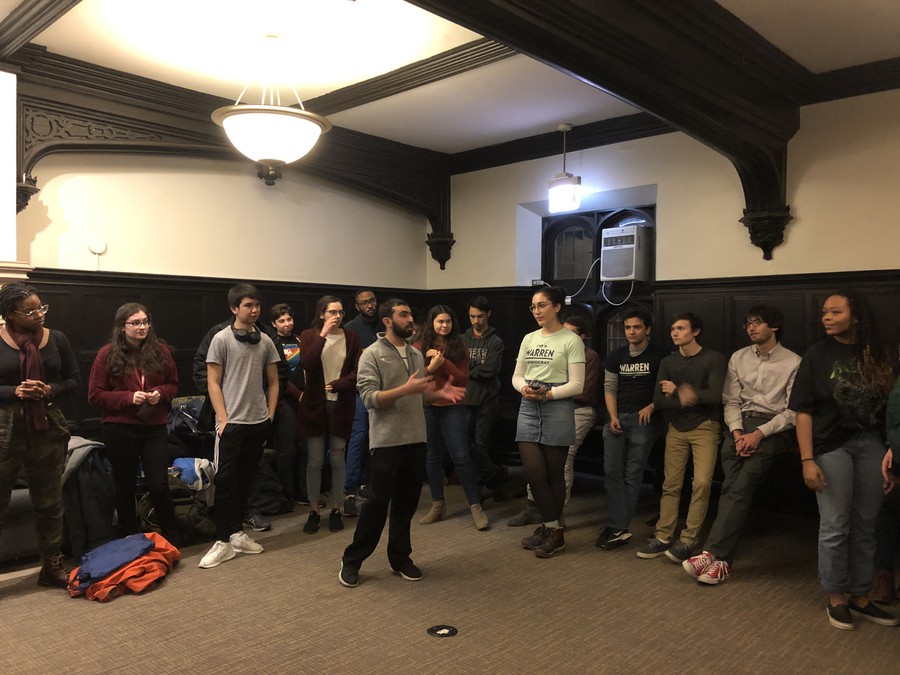 Warren's delegation makes their case to those in attendance at the UC Dems' "mockus" Monday night.

Representatives from campaigns for Senators Michael Bennet, Elizabeth Warren, and Bernie Sanders (A.B. ’64) all reached viability at the University of Chicago Democrats (UC Dems) “mock-us,” or mock caucus, Monday night. To be viable in a caucus setup, a candidate’s group must number at least 15 percent of the total number of people present.

Sanders took a plurality of votes, with 47 percent of those attending ultimately caucusing for him, while Warren took 36 percent, and Bennet took 17 percent. Fifty-three people were in attendance, according to the UC Dems count.

UC Dems operations manager Daniel Green read the contending candidates off his list, allowing time for people who supported each candidate to go stand in a separate part of the room. Each group then made a speech for their standard-bearer before the first “count” took place of how many people supported each candidate. If a group did not comprise 15 percent of the total attendance, it was nonviable, and its members had the option to switch their affiliation. There were two rounds of speeches and opportunities to recombine, with counts taking place after both.

Bennet’s surprising result rested in part on the weak performance of a number of other candidates: Pete Buttigieg, Joe Biden, Andrew Yang, and a satirical Tom Steyer delegation were all present for the first round of mock-caucusing, but were not viable when taken alone.

The event was friendly but charged with a sense of urgency, particularly from the Warren and Sanders groups as they engaged the large group of “undecideds” in the middle of the room. The two large groups’ back-and-forth mimicked the tug-of-war between their candidates for the party’s progressive wing as the Iowa caucuses get closer.

Second-year caucus attendee Dinesh Das Gupta began the night in the center of the room, and classified himself as a “hard undecided.”

“I like Warren, I like Bernie…. I am so concerned about whether they can beat Donald Trump. And as a young voter, I would like to see somebody under 70 in office. And Pete’s been a mayor. Has he been anything more than a mayor? No,” he said.

Das Gupta added that Buttigieg would be a good fit for a lower-level position in the federal government.

Second-year CJ Jones showed up to the caucus to support Bennet’s long-shot bid for the White House. He ended the night with just under 20 percent of the vote.

“He’s kind of under the radar,” Jones said of Bennet. “But I think if you’re somebody who doesn’t really like any of the candidates, or is kind of torn between bad choices, I think Michael Bennet is really an option you should consider.”

Jones emphasized Bennet’s progressive proposals, such as universal pre-K, and role as a member of the bipartisan “Gang of Eight” that helped reform immigration policy in 2013. In the next round, Bennet’s four supporters combined with the Biden, Buttigieg, and Steyer groups to reach viability in the next round.

Medical student Shivam Dave, a Warren supporter, said that income inequality is “the biggest issue that dominates this conversation.” While both Warren and Sanders have spoken to the issue, “Elizabeth Warren has done so at a greater level of nuance,” he said.

Along with noting Warren’s accomplishments on the Consumer Financial Protection Bureau and her plans for a wealth tax, Dave referenced his personal connection when making his case for Warren’s attention to detail and empathy with people on the ground.

“I’m from Texas. There’s a maternal mortality crisis in Texas, particularly among black women. Elizabeth Warren knows that. She has a plan for that. And I don’t mean that as a meme, I mean that she has taken the time to understand these issues that occur at the individual level,” he said.

He also drew a contrast between Warren and her chief rival, Sanders, on the basis of her intersectional appeal.

First-year Alexis Valencia began as undecided, but ended up joining the Warren delegation. He cited the strength of Warren supporter Dave’s speech as a reason for his newfound support for Warren.

“Coming in here, I wasn’t quite sure who I wanted to vote for…. What I experienced here was that it was hard to decide if it was the candidate themselves who I liked, or the speaker. I really hope that, later on, I’ll learn more about each of their policies,” Valencia said.

“No politician in America has worked for so hard or for so long to build [a] multiracial, working-class movement,” he began. “When Sanders was an undergraduate here, he was the president for the Congress for Racial Equality, and got arrested fighting to end University-segregated housing.”

“Is he electable? Is all of this just talk if it can’t be done? Why does [Trump] win? What draws Trump voters is that he’s running against establishment, corrupt Democrats. I am the voice—of Democrats who aren’t represented in Washington, and aren’t represented in Harvard Law, at McKinsey [where Pete Buttigieg worked from 2007 to 2010], at the corporate law firms Elizabeth Warren has worked at,” he said.

Bennet’s third-place finish, at a respectable 17 percent, represented within the University the problem for Democrats this election cycle: Some voters are uncomfortable with the more disruptive ideology of the Warren and Sanders campaigns, but uninspired by the most obvious default choice, former vice president Joe Biden. That leaves them picking among a plethora of remaining candidates.” In the real Iowa Caucus, many more moderate Democrats have made their choice Pete Buttigieg. The most recent Iowa poll has Sanders on top with 20 percent.

Joshua Shao was the only caucus-goer present for outsider businessman candidate Andrew Yang, who spoke on campus last month.

“My enthusiasm for [Yang] is mostly because of his economic knowledge and the way he understands modern problems that our society is facing,” Shao said. “I like him for his perspective, I feel like it’s fresh.” However, Shao wasn’t unwilling to consider other candidates.

Cas Crevecoeur, who interned for Joe Biden in Iowa over the summer with the Institute of Politics’ Iowa Project, was the only Biden supporter at the caucus.

“I know that Biden doesn’t have that much support on campus, so I just wanted to show there are some people who do support him,” she said. “He’s the only candidate I actually believe could make it [in] the general election, but also has the significant chance of capturing voters who don’t feel like they have a place to belong anymore.”

A real “satellite caucus” will be taking place on February 3 at 7 p.m. in University Church for voters registered in Iowa.