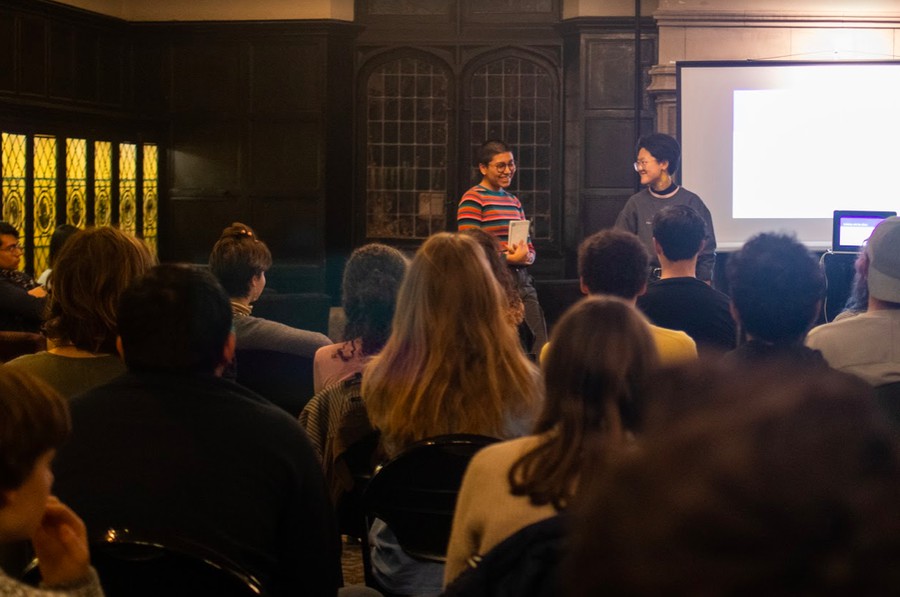 In a closed-door meeting with Student Health and Counseling Services (SHCS), FBU requested to co-host a public town hall regarding the new Wellness Center, according to FBU members present at the meeting. After SHCS declined the proposition of a public town hall, FBU decided to host their own forum on the Wellness Center and discuss areas they wish to see improvement in mental health resources at the University.

In response to the administration's decision to not co-host or attend the forum, organizers encouraged all attendees to e-mail administrators using templates that they had prepared.

At the forum, an assembly of approximately 60 students sent e-mails to five administrators: Mario Polizzi(assistant vice president for student services), Meeta Kumar (director of SCS), Deborah Pratt (administrative director of SCS), Michele Rasmussen(dean of students in the University), and Robert Zimmer (University president). The group sent around 300 e-mails in total, according to FBU leadership.

The email to President Zimmer called for the University to drop the charges against Charles Thomas, a student shot by a UCPD officer in 2018during a mental health episode.FBU activist Shira Silver criticized the administration for not providing sufficient mental health resources given UChicago has the highest estimated cost of attendance of any college in the United States. “Despite that, students here do not have access to the basic mental health services that they require to succeed,” Silver said.

“We tried to have a conversation with admin about our hopes for the new center. We invited them and repeatedly requested that they attend this forum, and they refused,” Silver said.

Anna Attie, organizer of UChicago Student Action (UCSA), expressed her frustration at the University’s claim to have insufficient funding for their demands.

“These administrators operate under the myth of scarcity,” she said. “They’re building a new Wellness Center, they’re continuing to gentrify Woodlawn by building a new Megadorm.... The money is there,” Attie said.

UCSA members also said that international students face unique challenges around mental health and advocated for greater cultural competency in SCS regarding the cultural stigma of mental health that many students from other countries face.

“It’s essential that student counseling makes scheduling easier and more accessible so that students who come from a background of stigma around mental health feel more comfortable reaching out to these resources in the first place,” third-year in the College Asha Varma said.

Jonathan Mandel, a fourth-year in the College, called for increased student oversight of the new Wellness Center. Mandel asked the University to release a “detailed budgetary breakdown” of funds going toward the Center and proposed the creation of a student oversight committee to ensure the quality of new counseling services. In an interview with The Maroon, Attie stressed the group’s message that students’ negative experiences are due to a dysfunctional system, rather than to personal failure. “At this University, mental health is a huge, systemic problem. It’s a crisis, it’s not just an individualized thing.”

Attie said that the resistance to the group’s demands reflects misplaced priorities on the part of the University. “This language of tradeoffs is really just a language of priorities, and they don’t prioritize mental health.”

In response to the argument that the University is already taking steps to improve mental health in campus, Livia Miller, co-coordinator of FBU, told The Maroon that, “if they were really doing all they could, they wouldn’t be afraid to come to a meetingand hear questions, because they could answer them honestly.”The Wellness Center, which is projected to open in 2021, will jointly house Student Health Service (SHS), Student Counseling Service (SCS), and Health Promotion and Wellness. The University has announced that they will be hiring new psychologists and an SCS case manager.

University spokesperson Gerald McSwiggan wrote in a statement to The Maroon saying, “Students have been integral to the planning of the Wellness Center, and their input helped shape many features that will be included.” The statement emphasized SHCS’s continued collaboration with students through the development of the Wellness Center, citing the Student Health Advisory Board’s involvement, which includes undergraduate, graduate, and professional school students, and prior meetings with Student Government and FBU.

In the statement, McSwiggan also said that while SHCS “respects the autonomy of Fair Budget organizers to choose their approach for advancing priorities, SHCS leadership believes that collaborative engagement with students will lead to the most meaningful and substantive progress toward enhancing student wellness at UChicago.”