As the First Primaries Approach, UChicago for Bernie Hits the Phones

UChicago undergraduate and graduate students backing the Democratic hopeful for president meet on a weekly basis to call potential voters for the democratic primaries. 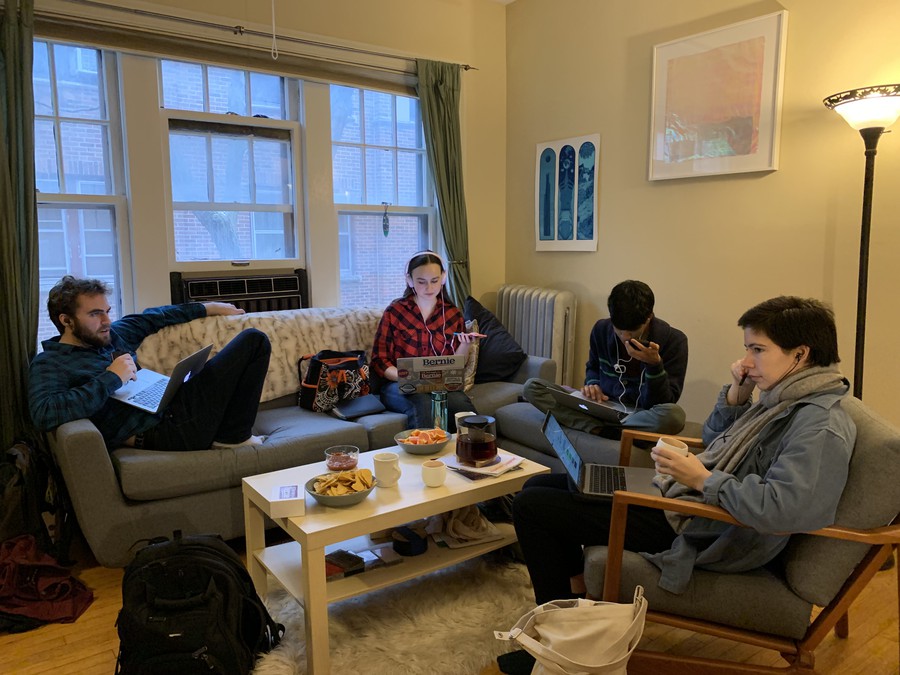 “Hi, is Mary available?,” she asked through clattering laptop keyboards and a flurry of conversations. For the student volunteers on the phones, each call is a chance to propel Sanders to victory in the 2020 Democratic Iowa caucuses and other early primary states.

UChicago for Bernie has been organizing weekly phone banks since October. First-year graduate student Chris Wilson (A.B. ’19) said the phone calls help to bring voters on board with Sanders’s campaign through recruiting voters and volunteers while raising political awareness among those who are disengaged from the electoral process.

“There are lots of conversations where you’re able to persuade undecided voters or those who already support other candidates,” Wilson said. “But also a lot of the time you talk to people who are not political, not paying attention, and you can tell them ‘Hey there is this candidate with a platform that will help you in real life,’ and that gets them to start paying attention and start being interested. We want to reach people who have given up on politics.”

Wilson and first-year undergraduate Ronan O’Callaghan praised Sanders’s campaign for making grassroots efforts like the phone banks easily accessible for campaign volunteers by making online training and scripts available. UChicago for Bernie volunteers connect to the larger campaign through an online dialer and receive a list of voters in an early primary state to contact. For the phone conversation itself, volunteers read a script provided by the campaign and are encouraged to share their personal reasons for supporting Sanders.

O’Callaghan shared why he believes this campaign strategy is effective: “I think it’s the best way to win…. People having earnest, genuine, sympathetic, and empathetic conversations with each other on a one-to-one basis—I think that’s just a more viable path to victory in the long run. And it’s not just about winning the campaign—it’s about transforming this country.”

Pelliccia, who was talking to potential Colorado voters at the Martin Luther King Jr. Day phone bank, has been involved with the group since she arrived on campus. She’s participated in other phone banks and has also traveled to Iowa to help canvas for the Sanders campaign ahead of the February 3 caucuses.

In her conversations with potential voters, Pelliccia focused on her concerns about climate change, health care, and education funding as reasons why she support Sanders. Pelliccia believes the phone banks and other efforts will have a significant effect on the campaign.

“We can have an impact at this point in the campaign just getting people to turn out for Bernie in the caucuses,” Pelliccia said.