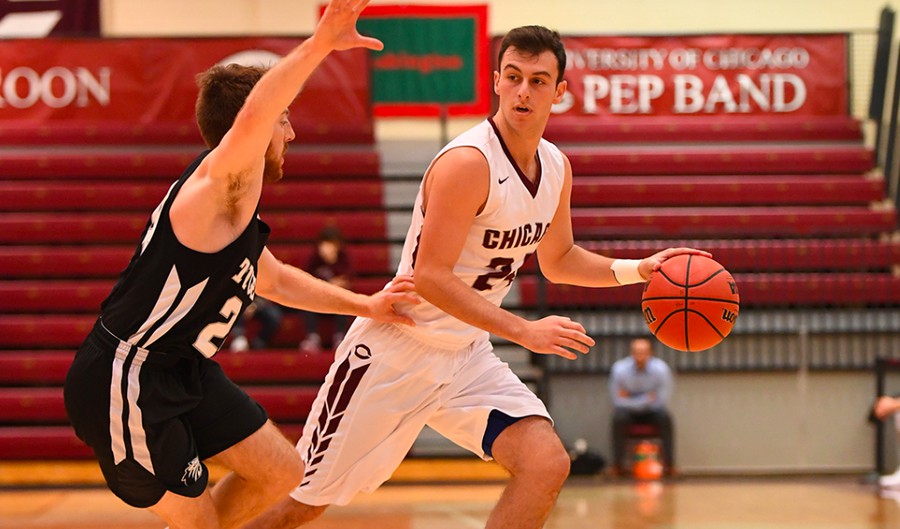 Jordan Baum was always going to play basketball. The fourth-year was an Illinois Mr. Basketball Finalist when he chose to join the Maroons four years ago, and he has never looked back.

“My dad played basketball his whole life, so I think it started before I was born. There are pictures of me in a Michael Jordan jersey holding a ball when I was like a month old, and my first word was ‘ball’ so it’s pretty much always been a part of my life.”

Baum has played in 88 games throughout his career at UChicago, starting 64 of those games. The senior has made over 150 threes in his career, and he is also 36 assists from breaking the career record of 484. This year, he leads a team composed of fresh faces who have not yet seen many minutes in their UChicago careers.

As his proximity to the career assists record suggests, Baum relishes his role as a point guard. “I’ve been a point guard my whole life, and I think my favorite part of playing point is being in control. I’m the middleman between the coaches and the rest of the team, and my coaches for most of my life have given me the freedom to take the lead and make calls when I see something on the court. I like being able to see the whole court at the same time and being able to make plays for my teammates.”

UChicago is a difficult place to pursue a major in economics and put in over 25 hours a week on the basketball court to lead a successful program. The opportunity to pursue both is something Baum will miss most about his experience at UChicago. “Basketball has always been a way for me to forget everything else going on in my life. It’s a way for me to clear my head and just let loose, which is really nice given how stressful school can get at UChicago. Playing at UChicago has been really special in a lot of ways. Some of my closest friends are my teammates, and we spend almost all of our time together on and off the court. The program prides itself on being a family, and Coach McGrath does a great job of that, especially through keeping the alumni so involved in the program.”

In typical Baum fashion, the goals for the remainder of the season are all about his teammates. “I want to finish the season strong and compete for a UAA championship. None of our seniors have been to the tournament before, so I think that’s something we’d all like to experience before we leave.”

After completing his decorated career at UChicago, Baum plans to work at Stout as an investment banking analyst in Chicago. While he will no longer wear the #24 jersey for the Maroons, Baum’s leadership and influence will leave a lasting impression on the program for years to come.