Doomsday Clock Ticks Closer Than Ever to Midnight 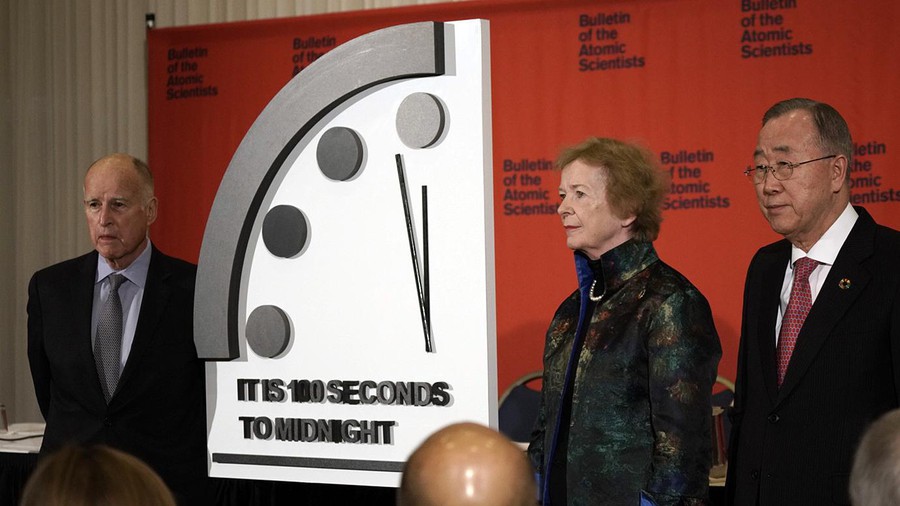 A photo of the Doomsday Clock being advanced during a Jan. 23rd, 2020 ceremony.

On Thursday morning, the UChicago-based Bulletin of the Atomic Scientists moved the hands on its Doomsday Clock from two minutes to midnight to 100 seconds to midnight, the highest threat level it has ever displayed.

Midnight on the Doomsday Clock symbolizes a human-caused global catastrophe, whether from nuclear war, climate change, or disruptive technologies.

The announcement was made at the National Press Club in Washington, D.C.

After inching closer to midnight in 2018 and reaching the highest threat level since 1953, the Clock’s position held steady last year, representing a precarious state of affairs that Bulletin president and CEO Rachel Bronson then referred to as a “new abnormal.”

The Clock was furthest from midnight in 1991, when the end of the Cold War was reflected by the Clock being set at 17 minutes to midnight.

Housed in the University’s Harris School of Public Policy, the Bulletin was formed after the Second World War by former participants in the Manhattan Project, which developed the world’s first nuclear weapons. This November will mark the 75th anniversary of the organization’s founding.

In her opening remarks on Thursday, Bronson reiterated the Bulletin's deep concern about the state of world affairs.

“By undermining cooperative science- and law-based approaches to managing the most urgent threats to humanity, leaders have helped to create a situation that will, if unaddressed, lead to catastrophe sooner rather than later,” she said. “It would be a privilege and an honor to move the hands of the Doomsday Clock away from midnight, but our current situation does not warrant that.”

In fact, she added, it has gotten even worse.

In its 2020 Doomsday Clock Statement, the Bulletin stressed the importance of international agreements such as the multilateral Joint Comprehensive Plan of Action (commonly referred to as the Iran Nuclear Deal), which the United States withdrew from in 2018, for the prevention of nuclear war. The group also urged world leaders to pursue diplomatic paths towards nuclear disarmament.

The statement went on to call the international response to climate change “insufficient” and warned of the threat posed by new technologies that can more easily disseminate misinformation and subvert democratic institutions.

“It’s very hard to find the words even to express the moment we now are in,” former California governor Jerry Brown said at the conference. Brown serves as the Bulletin’s executive chair. “What you’re hearing this morning is really the voice of prophets of doom.”

He lamented the fact that those seeking to sound the alarm on global threats have, in his view, been ignored, likening them to biblical prophets who went similarly unheeded.

“I hope that not one person here feels any cynicism, complacency, or feeling that we’re not in this predicament,” Brown said. “We can still pull back from the brink.”

So far, according to Brown, attempts to address the threats identified by the Bulletin have been “totally inadequate,” and most of those in power are “totally ignorant, blind, and deaf to our predicament.… The task is: Wake up. Wake up, America. Wake up, the world.”