In Defense of Bar Night

Grime aside, Bar Night is a UChicago institution and a welcome constant throughout students’ first quarter. 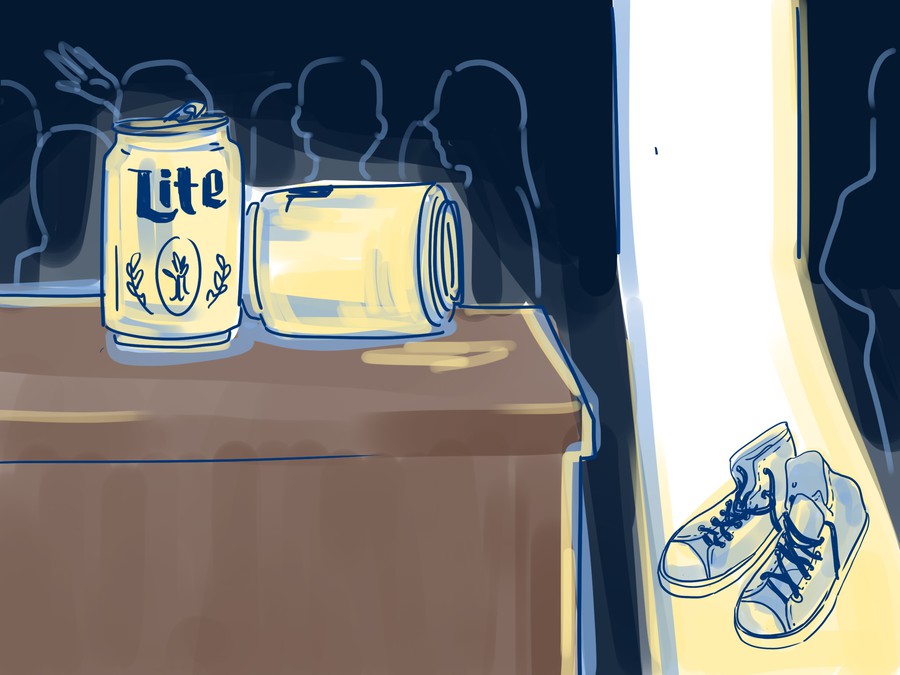 Look, Bar Night is grimy. There’s far too much mud on the floor, the music isn’t great, and it’s hosted by a frat with all the baggage that entails. But, honestly, it’s pretty fun. Bar Night is a UChicago institution: it’s weird, it’s a little awkward, but it’s a great way to have fun and make friends, and it’s a defining feature of so many people’s first year at this university. Despite all the issues with frat parties, Bar Night should be preserved: the UNESCO World Heritage Site of Wednesday nights.

A quick disclaimer: I haven’t been to Bar Night in a very long time. My days of heading down to the quad in a coat that I really hoped wouldn’t get stolen and a few dollars in cash fresh from Citibank were limited to autumn quarter of my first year. It’s possible that Bar Night would now be unrecognizable to me, but I doubt it. Somehow, I think Bar Night has always existed, that after the 1930s Maroons had just obliterated some poor conference rival in football (we were in the Big 10!), students would head to Bar Night, listen to “Sicko Mode,” and wake up with the sort of hangover only cheap beer can give you.

You might think from the sarcastic description that I didn’t care for Bar Night, but that’s not the case. I liked it. I have many fond memories of the Wednesday night basement scene at Alpha Delt. There is an almost surreal timbre of conversation specific to large parties that is a defining feature of Bar Night as a first-year. It takes place in line for the bathroom, or perhaps between songs, and it involves someone you have never seen outside of class. There is an instant of recognition, possibly an awkward wave or smile. You suddenly discover that they are a real person; they speak! They have opinions about subjects other than Locke or Rousseau! Yet somehow you cannot talk about anything but class: so much reading, and what was up with that weird tiger shirt the professor was wearing? For a brief period, your social and academic lives intersect. To me, it seems that every time I went to Bar Night, I had this sort of conversation, and I always enjoyed them.

Of course, I didn’t go to Bar Night to awkwardly talk to people from my Hum and Sosc classes. As a first-year, I had both free time and the desire to go out. Bar Night offered cheap alcohol and the chance to dance and meet people in the middle of the week. It was a quick walk and full of people I knew. Nobody’s room was going to get destroyed, and nobody’s Resident Head would be called. It wasn’t going to change my life, but it was fun.

There are problems with Bar Night, as there are with all fraternity parties. Alcohol is provided by someone else, you are in an unfamiliar space, surrounded by unfamiliar people, with conduct being policed by college-aged kids who might be more concerned with the reputation of their organization than anyone’s personal safety. I cannot write about Bar Night without acknowledging attendant evils of all frat parties: the dangers of sexual assault or uncomfortable, frightening encounters that don’t have a legal term but ruin your night nonetheless. Beyond these, there are the risks of blacking out and vomiting that come with drinking alcohol at any time. These are not Bar Night specific, nor is Bar Night free of them.

Despite these dangers, despite the risks, Bar Night has things to recommend it, especially for first-years. Autumn quarter of first year is stressful, as all large changes are. Most of us went from living with parents to living with strangers, and from a limited number of classes to choose from to a vast array. UChicago is an academically challenging environment,  as I am obliged to remind you as a writer for *The Maroon*, and that stress is compounded by the vast shift in living situation that first-years undergo. For the first few weeks of first year, I was enveloped in a haze of uncertainty: where are my classes/the dining hall/the bathrooms? Even the location of your room seems to shift along undifferentiated dorm corridors. Worse, your relationships with other students feel shaky and indistinct. Almost everyone has O-Week friendships that dissolve by mid-autumn quarter. The human mind longs for consistency and order—this is when I wake up, this is my social group. For the first weeks of the first year, when routines and relationships have yet to solidify, nothing on campus feels consistent.

During these dizzying first weeks, Bar Night can serve as a welcome constant. No matter what week it is, Bar Night is blissfully undeviating. There may be fewer or more people or the songs might be in a different order, but essentially it remains the same. If you let it, Bar Night can be the organizing principle of your first autumn quarter, the North Star around which the constellations turn.

I’m being facetious, but there is something to be said for Bar Night as a stabilizing factor. It’s a way to have fun unique to college: getting drunk and dancing in a crowded frat basement, a sort of reward for making it through half the week. Bar Night is the type of thing we’ll remember when Miller Lite and frat shoes are relics of the past. Every surreal encounter with a stranger in line for the bathroom is balanced by a shared experience with a friend. Bar Night builds and creates friendships by providing the venue for the sort of mistakes and awkward occurrences that lead to inside jokes. Nothing strengthens friendships like stumbling back to the dorm and doing a quick Bar Night debrief over a cup of tea and a bag of microwave popcorn.
Bar Night may ultimately lose its appeal after your first quarter, but it’s a great way both to destress and to make the sort of friends who will end up going with you to other, better parties or else stay in with you for movie nights. Bar Night is the grimy incubator of your college experience.

Bar Night provides a much-needed way of having fun, especially for first-years. It is open to all and happens every week right outside the quad: no special information is needed to go. At a school so focused on academics, it’s important to give first-years a space to have fun, to make friends, and to get drunk—in short, to experience some of the stereotypical parts of college. Besides, it’s a UChicago tradition. My hope is that even if frats are banned or if the University makes sweeping changes to its policies, Bar Night will remain a grimy, surreal place to hurl yourself into college life.