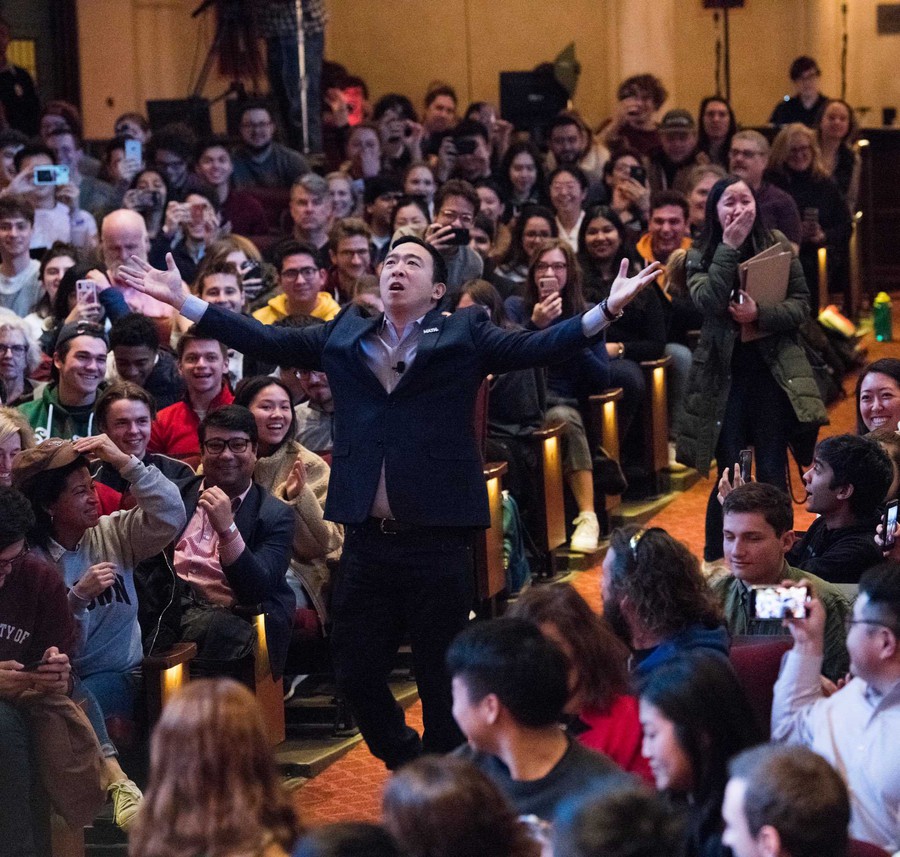 Photo courtesy of the Institute of Politics

Democratic presidential candidate Andrew Yang spoke at the Institute of Politics (IOP) on December 5 about impeachment, visions for the economy, universal basic income, and more. The conversation was moderated by IOP Director David Axelrod as part of a live taping of “The Axe Files” podcast.

Yang is the founder of Venture for America, a nonprofit organization that focuses on creating jobs in struggling American cities by promoting entrepreneurship. The Obama administration named him a Presidential Ambassador for Global Entrepreneurship in 2015.

Initially thought as a long shot candidate, Yang has gained ground in a primary with more than a dozen candidates and remained a contender as opponents with more prominent national positions have ended their campaigns. He raised 10 million dollars in the third quarter of 2019.

The conversation began with a question about House Speaker Nancy Pelosi’s announcement earlier that day that the House will proceed with articles of impeachment over President Donald Trump’s Ukraine scandal. While Yang said he believes it is appropriate for Democrats to move forward with impeachment, he told the audience that he is concerned that too much of a focus on impeachment might result in the Democratic nominee not making a sufficiently convincing argument to voters in 2020.

“To me, the biggest drawback of impeachment is that Donald Trump is a creature who thrives on attention, and impeachment is attention. Even if it seems like it’s bad for him, he’s winning. We have to take every opportunity to make our case for a more positive vision for the country that Americans can get excited about. That’s how we’re going to beat him in 2020,” Yang said.

Yang’s signature policy is the Freedom Dividend, a universal basic income (UBI) which guarantees $1,000 monthly for all American adults.

“If you put $1,000 a month in the hands of everyone in a town in Missouri—let’s say there are 10,000 adults, that’s $10 million more in disposable income every single month. Where will the money go? It will go to car repairs and daycare expenses and Little League signups and local organizations. It will end up creating new jobs right there in that community that actually reflect the needs and the values of that community,” Yang said.

According to Yang, a UBI can mitigate the negative impact of jobs he predicts will be displaced by technology and automation.

Besides UBI, Yang said that there is also a need to change the U.S. economy to recognize human value. “We are in this position where we are actually arguing that we should turn coal miners into coders because we have confused economic value with human value,” Yang said.

“If the market says you have no economic value, then you are valueless, and then we have to try to find some other way to plug you into the machine for you to have any value.”

Yang said that an economic system that does not appreciate human value is part of the reason why anxiety, depression, and suicide rates are rising.

“You all are here at the University of Chicago…to the extent that winners exist in our ‘meritocracy,’ you are it. And I know that you do not walk around feeling like a winner…that you are anxious, you are stressed, you feel like you are in a race, and you're not even sure what you are racing towards…so if this is what it's like for the winners in this system, imagine the people who are kicked to the curb,” Yang said.