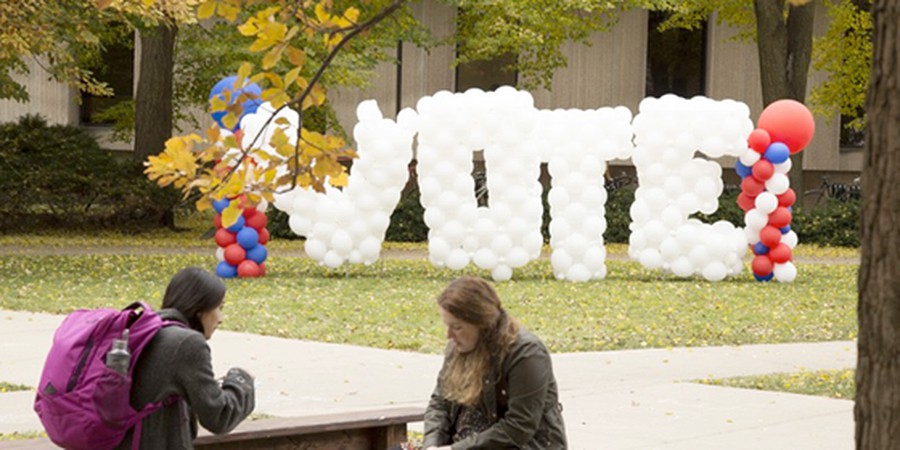 Voting Campaign on the Campus

The Maroon Staff / The Chicago Maroon

Student-athletes at the University of Chicago are joining their peers to increase voter registration on campus and within the athletic department. These efforts are a carryover from a summer that spotlighted athlete activism, from the postponement of NBA playoff games to collegiate marches protesting for social justice.

The voter registration initiative has been a collective effort from UChiVotes, the student-led organization based out of the Institute of Politics, and individual team members. Ashley Gao, a second-year on the women’s basketball team, had initially become involved with voter engagement to help bring an organization called Voice in Sport to the UAA conference, along with a student-athlete at conference rival New York University. Gao began appointing leaders on each varsity team to track their team’s registrations, but she soon recognized that a partnership with UChiVotes Outreach Director and women’s soccer third-year Anna Kenig-Ziesler, who was reaching out to coaches, could be helpful.

“The goal of the athletic department initiative is to have 100 percent voter registration across athletic teams. We want to make sure that all athletes have the resources and information at their fingertips to know how to vote and what the voting options are [for] this election,” said Kenig-Ziesler.

Beyond full voter participation, Gao adds that a secondary goal is “that our [athletic] community also understands why it is important to vote and how it impacts our country.”

The athlete initiative at UChicago mimics initiatives at other university athletic departments and within professional sports. From the University of Missouri to Portland University, athletic departments and teams have made voter registration a central emphasis for the fall of 2020 with the goal of 100 percent registration among student-athletes. Campuses are opening up arenas and athletic sites as polling places, and the NCAA has mandated that every Division I program give student-athletes the day off on Election Day.

“By providing this day dedicated to civic engagement each year, we are making a clear distinction that our American student-athletes will always be citizens before they are athletes. The student-athlete voice continues to grow louder and louder every year, and we can see that through this action,” said Division I Student-Athlete Advisory Committee chair Ethan Good at the time of the announcement in September.

While Division III athletic programs, including at UChicago, have yet to mandate a similar department-wide or division-wide measure, UChicago athletic administrators and coaches have been receptive to the voting initiative.

“The reception on teams and across the department has been incredible…. I’m really excited by how many coaches have engaged with this initiative, and I think it’s a great indication of what it means to be a student-athlete at the University of Chicago. This is about more than sports,” said Kenig-Ziesler. Her team has already achieved 100 percent voter registration in part due to the support and focus of her coaches.

The attention on voting initiatives has come with a broader, national conversation about voter suppression and civic engagement. In 2016, just 46 percent of eligible voters between the ages of 18 and 29 voted, according to the U.S. Census Bureau. Those numbers are even lower among communities of color, where voter I.D. requirements, automatic voter purges, and inconvenient polling sites disproportionately prevent voter turnout.

Gao decided to work as an Election Judge for the November 3 election in order “to simplify the voting process and make up for the shortage of volunteers…. If volunteering in the place [of older volunteers unable to work due to COVID-19 concerns] will help even just one person get their vote out, I am happy to do it.” A Mandarin speaker, she was assigned to a site near Chinatown and “realized that the Asian community, specifically, often has lower voter turnouts and…I hope to increase that number.”

Athletes and coaches across levels have been especially vocal about these issues. In August, decorated NBA coach Doc Clippers told reporters in an impassioned clip, “The fact that there’s so much voter suppression going on with Blacks and Latinos, and really young people, tells you how important voting is…. I just urge everyone to vote, exercise that right.” A survey from June reported that only 20 percent of eligible NBA players voted in 2016, but, due to the concerted efforts of the league and players’ association, over 90 percent of the NBA players are now registered to vote.

Gao refers to the infamous 2018 incident in which Fox News reporter Laura Ingraham told LeBron James to “shut up and dribble” after he discussed and criticized politics, particularly President Trump. This incident “highlighted how athletes are not seen as people and simply a form of entertainment,” in her words. “With the role models in professional sports these days emphasizing the importance of voting, I believe it is our job as college athletes to support them and follow suit,” she said.

Kenig-Ziesler calls voting the “cornerstone of democracy” and points to this “long history of voter suppression,” which she claims is “more evident in this election than ever,” as a critical reason for involvement with the voter initiative.

“I think if we can’t even get UChicago students—a population of highly educated and well-informed people—to vote, it’s hard to expect that the population at large will either. That really motivated me to get involved and just make sure that everyone on campus has the information and the tools they need to participate in democracy and make their voice heard,” she added.

Only 50 percent of undergraduates at UChicago voted in the 2016 election—an increase from 19 percent in the 2014 midterm elections—a number that Kenig-Ziesler calls “appalling.” Thanks to the student-led UChiVotes initiatives, over 70 percent of undergraduates were registered to vote for the 2018 election, the highest percentage among colleges and universities in the nation. Experts expect that the 2020 election could see some of the highest turnout among college students in history.

Currently, only the women’s soccer team has announced 100 percent voter registration, with several other teams upwards of 90 percent. Some student-athletes have been resistant to the push, preferring that the athletic department be apolitical, although voter registration is considered a nonpartisan issue. With deadlines approaching for both registration and absentee ballot requests, student-athletes are making one last push to get their teammates registered.

It’s important that athletes vote because it’s important that everyone votes,” said Kenig-Ziesler. “Every athlete on this campus has their own story and their own voice, and we want to make sure that all athletes who are eligible voters know how to make their voice heard.”