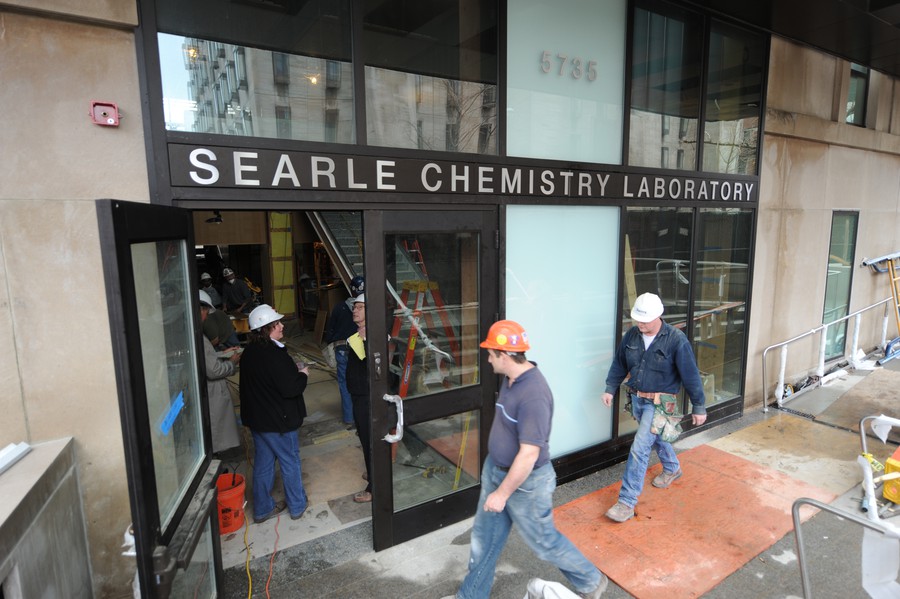 Searle Chemistry Lab under construction in 2009.

Five labs on UChicago’s campus consume significantly more energy per square foot than other labs in similar climate zones, according to research conducted this summer as a part of the University’s “Environmental Frontiers” (EF) internship program.

The EF interns, who are UChicago undergraduate students working under faculty supervision, analyzed data from over 300 lab buildings in Hyde Park’s climate zone. They used this data to model a typical building’s energy use intensity (EUI) given its square footage, accounting for the fact that biology and chemistry laboratories tend to be more energy intensive.

Five of the eight lab buildings that the group analyzed—Searle Chemistry Laboratory, Michelson Center for Physics, Bio-Psychological Research Building, Gordon Center for Integrative Sciences (GCIS), and Eckhardt Research Center (ERC)—have an EUI higher than the benchmark model predicts. In other words, they use more energy than comparable buildings.

ERC and Searle are “LEED-certified,” a certification given to buildings designed with sustainable features.

The remaining three buildings that the group analyzed, which includes Kent Chemistry Laboratory, Henry Hinds Laboratory for the Geophysical Sciences, and George Herbert Jones Laboratory, were found to be “overperforming,” or having a lower EUI than predicted by the model.

The percent disparity between predicted and actual EUI ranges from -21.5 percent for Kent to +90 percent for Searle.

The EF interns attributed the buildings’ high energy use in large part to their “minimum ventilation rates,” or how often air within a lab is recirculated. Lab buildings at UChicago perform a constant number of recirculations per hour, whether the building is occupied or not. In contrast, the peer institutions that the group analyzed reduce their circulation rates during unoccupied hours and use fewer recirculations than UChicago when buildings are occupied.

Third-year Shopnavo Biswas, one of the EF interns working on this project, noted that lower ventilation rates may increase the risk of contaminants in the air. The group recommended conducting risk assessments to determine the safety of this measure.

The group also found that most electricity in campus labs is used in fume hoods. They recommended upgrading the fume hoods in certain labs from Constant Air Volume (CAV) to Variable Air Volume (VAV), as this would decrease energy consumption when the fume hoods are not in use.

The interns also recommended behavioral energy-saving measures, including a “Shut the Sash” campaign that would encourage researchers to close the fume hoods when not in use. Based on similar campaigns that have been implemented at peer institutions, they estimate that this campaign alone could save the University an annual $120,000, or upwards of one million kWh per year.

The group’s other recommendations included restarting the “UC Green Labs” program, a discontinued initiative that monitored labs’ energy use and slightly raising the storage temperature of ultra-low temperature freezers to further reduce electricity use.

Biswas’s research team also found that lab buildings make up over a third of campus energy use, despite comprising only around 10 percent of building area.

Another EF research group found that UChicago’s LEED-certified buildings do not perform better than non-LEED buildings in Chicago. However, Jasmina Scekic, a third-year student working on this team, said that this trend was not specific to campus; a wealth of past literature, including research done in the City of Chicago, suggests that LEED-certification does not lead to better building energy performance, as measured by EUI.

In explaining this finding, the group emphasized a flaw inherent in LEED: certification is granted based on a building’s “predicted energy use” model rather than any actual energy use data. Scekic said that not a single building on campus was performing up to its predicted efficiency and described UChicago LEED buildings’ predicted energy use models as “ambitious.”

The group recommended that UChicago increases its focus on building operations and management in order to improve existing buildings’ energy efficiency. They also recommended that, when certifying new buildings, the University uses a framework based on buildings’ actual, rather than predicted, energy performance.