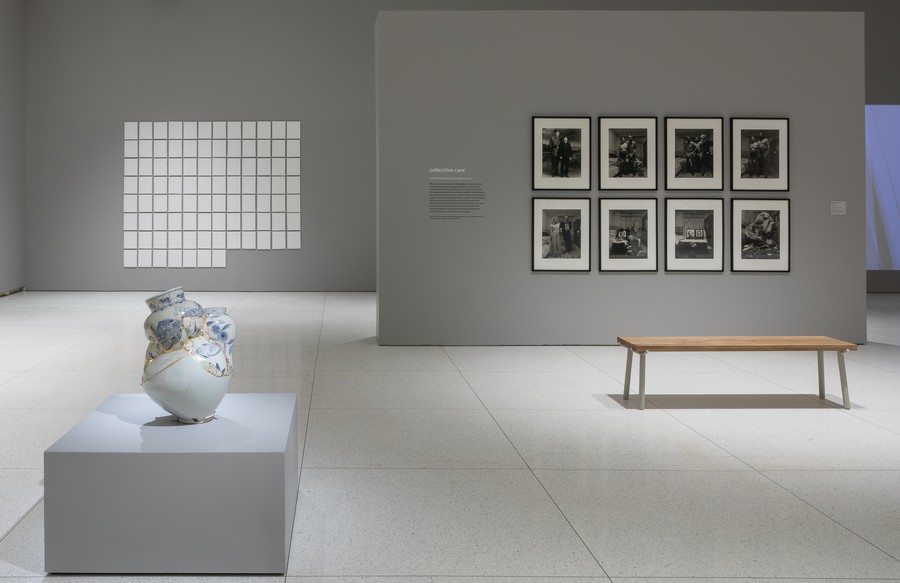 On October 1, Curators at the Smart Museum opened Take Care, an exhibition exploring the different ways care exists and how who cares can often be determined by inequalities in society. The main curators, Berit Ness and Jenny Carty, drew from the Smart’s permanent collection as they sought to reflect on the ways that caregiving is shaped by intersections of race, gender and class.

Ness, Assistant Curator of Academic Initiatives, said that designing the exhibition felt “daunting at the beginning because it felt like a project that had real stakes. Yet we felt humbled that we might have an exhibition that had resonance with our moment.” She said that the themes of their exhibition became even more relevant after they began the sketching process in June.

Ness said that Bethany Collins's print, “A Pattern or Practice,” was particularly poignant to the exhibit. Collins used an embossing technique to reproduce the Department of Justice investigative report on the Ferguson Missouri Police Department following the police killing of Michael Brown in 2014.  “[By] reproducing the text in a way that should be plain to see [Collins] speaks to our understanding of the structural inequities in our country, […] mirroring the ways it is often difficult to see what is right before you,” Ness explained.

Structural inequalities of care are also presented in Rosalind Fox Solomon’s “Mother, Daughter, Maid. Johannesburg, South Africa. 1988-90.” In the photograph, a white mother and child smile at the camera while sitting in a chair in their living room as a Black maid kneels on the floor staring into the camera. The exhibition caption comments that “Solomon’s composition surfaces the tensions inherent in the systemic racism and its impact on unequal divisions of labor.”

The exhibit also displays a work in collaboration with the Chicago Department of Streets and Sanitation; the work is titled “Chicago DSS: Division 7, Division 4, Division 2, Division 6” by Mierle Laderman Ukeles and Julian Flavin. Ness said that it “celebrates the ways the sanitation workers allow our city to thrive.”

For Ness, the hardest part of building the exhibition was knowing how to balance a light and dark tone. “It would be doing an injustice to not think about how caring can be so beautiful and joyful, how caring for one another is how we show elements of love and kinship and friendships, especially in this heavy movement.  We felt like we needed to find ways to bring forward both of those aspects,” Ness said. She referred to these elements in Kerry James Marshall’s painting “Slow Dance,” which shows two lovers dancing in their living room to The Originals song “Baby I’m For Real.”

The final part of the exhibition is “Collective Care,” where members of the community can choose an art series to be displayed until the end of the show on March 21. Currently on display is a series of photographs titled “My Parents” by Song Yongping, which demonstrates the different systems of support within families. The series was chosen by Brian Callender, Assistant Professor of Medicine at the University of Chicago Medical Center.

Ness outlined the ways that the pandemic shaped the layout of the exhibition. “We really considered COVID in our exhibition design in thinking about the ways that people might feel comfort or discomfort in space,” she said. She added that the subject of care is distilled into every minor detail of the exhibit, including the grey color of the walls chosen to “convey a sense of warmth and care.”

With a reservation, members of the community can visit the exhibition for free.

The article has been updated to include the full title of Rosalind Fox Solomon’s artwork, "Mother, Daughter, Maid. Johannesburg, South Africa. 1988-90."