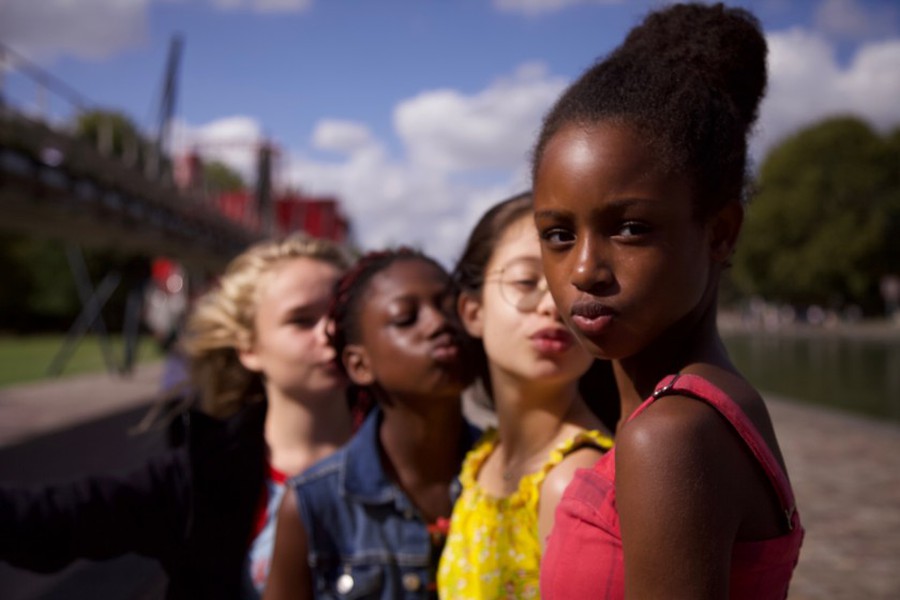 Maïmouna Doucouré’s directorial debut Cuties follows the life of eleven-year-old Senegalese immigrant, Amy (Fathia Youssouf), as she finds herself pulled between the demands of her strict religious upbringing and the overtly-sexualized Western culture she confronts with her move to Paris. Struggling to fit in, she befriends Angelica (Médina El Aidi-Azouni), a young girl in a neighboring apartment, who invites her to join their dance troupe “Cuties.” As the audience follows the events of Amy’s life, we are forced to recognize the ever-growing pressure on young women—or, in this case, a group of prepubescent girls—to capitalize on their sexuality.

By addressing such a controversial topic, Cuties has been fraught with criticism. Its sexually suggestive portrayal of children, most notably its advertising campaign that displayed the cast in a series of revealing outfits, conveyed little context of the film’s main objective as a social critique. Without more information, people could easily be forgiven for thinking that the project was not driven by more noble motives. On the other hand, it is this same lack of context that sends an important message about the media we have been programmed to consume. Such an in-depth narrative of Amy’s tense relationship with her parents; her responsibility for her siblings; and her intense need for acceptance all play a large part in how we understand her decision to immerse herself into a problematic friend group and her questionable actions thereafter—a luxury that people today are so often not afforded.

As the saying goes, “depiction does not equal endorsement.” In fact, Cuties does the exact opposite of endorsing. Some of the more controversial scenes—cameras focusing on the crotch area, suggestive dancing, and outright dangerous beauty routines—are jarring in order to question practices we might have been made to normalize. Doucouré, in preparation for this film, tried to make the story more authentic by taking memories from her own life and the accounts of girls she interviewed when writing the script. Even today with TikTok, Gen Z’s social media platform of choice, we can see similarly troubling value systems at play. Underage users are frequently bombarded with impossible beauty standards and an audience algorithm that teaches young girls to mimic older women with revealing outfits and suggestive dance moves as a way to attain online praise. Charli D’Amelio, the world’s most infamous TikTok user, was only fifteen when her dances started gaining worldwide attention. Cuties is simply making us confront and question behavior that is already endemic in much of Western culture.

Note that Cuties does not try to denounce sexuality as a whole, but merely its indoctrination. Through social pressures, young girls have the potential to be inspired to mimic things they may not fully understand—often to untold consequences. This is made clear in the group’s final performance when, mid-routine, Amy’s epiphany about how social pressures have drastically affected her own sense of self sends her instinctually darting into her mother’s arms. She finally embraces her youth.

Doucouré tries to make clear that Amy and her friends are still very much children, despite what their dance routines might imply. In trying to disinfect Amy’s wound, Angelica licks her fingers to apply washing powder to the cut. When preparing her brother’s breakfast, Amy counts the individual Cheerios to fill the bowl. She smiles at her friends with a mouth full of gummy bears. To accelerate the growth process, these girls have inevitably had to depart from these innocent moments. A lifestyle that to Amy had initially been seen as a form of liberation has turned out to be even more suffocating.

While Doucouré navigates a very important topic with much more nuance than her critics give her credit, it is not enough to simply identify the problem. In the film, Amy has to make the decision that her behavior does not fall in line with her own sense of self—a tough decision to make for anyone, let alone a young girl—in order to escape her situation. The film suggests that the onus is on the young girls to question their own behavior, which is, at least for me, a very questionable solution.