"The Trial of the Chicago 7," out on Netflix, is quintessential Aaron Sorkin: snappy dialogue, timely political anxieties, near-complete erasure of female characters, and a healthy dose of moral liberalism. 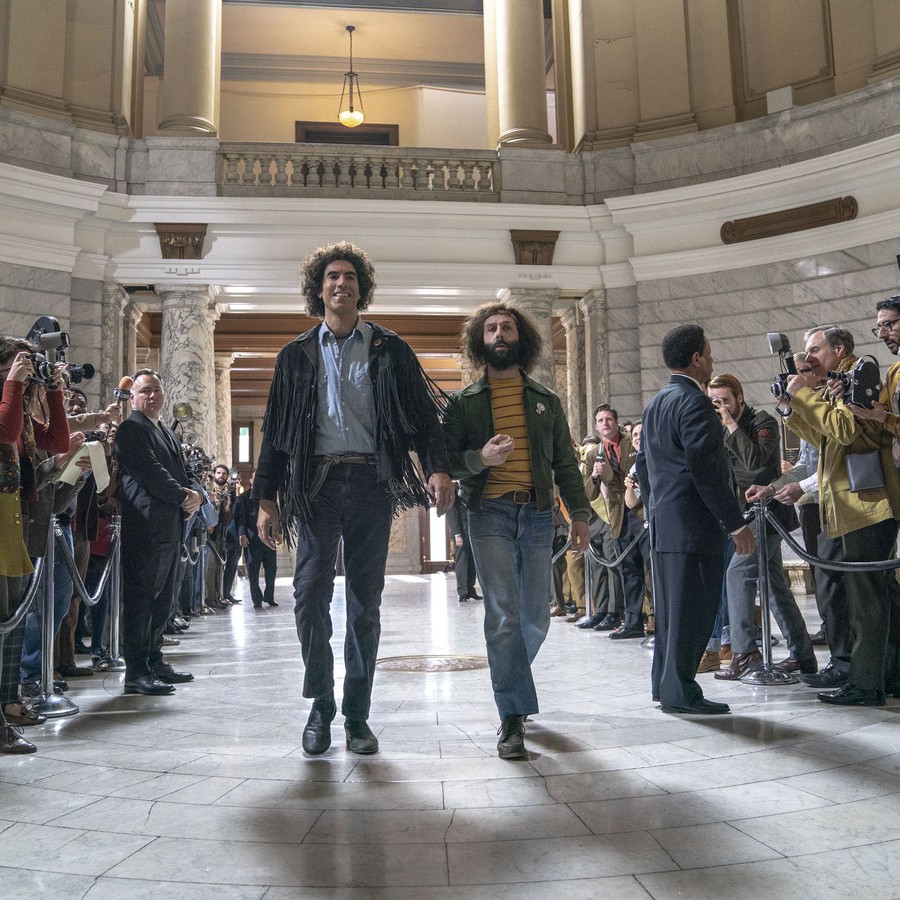 There is no question about the outcome of the trial—that the bad guys will win this courtroom battle.

The real-life trial of the Chicago Seven was made for the movies—or, more accurately, it was made for an Aaron Sorkin movie. The infamous 1969 trial of seven defendants charged by the federal government with conspiracy, arising from the countercultural protests in Chicago at the 1968 Democratic National

Convention (DNC), represented a blockbuster political courtroom drama that featured its fair share of stakes, moralizing, and absurdity. So, naturally, Sorkin stepped in to translate it to the screen, serving as both director and writer.

The Trial of the Chicago 7 , out on Netflix, is quintessential Sorkin: snappy dialogue, timely political anxieties, near-complete erasure of female characters, and a healthy dose of moral liberalism. This is proven ground for the screenwriter, so who am I to complain when it devolves into a rehash of his previous talking points? After all, this is a writer responsible for some of the best television and most iconic screenplays in the past three decades, ranging from The Social Network to The West Wing.

Yet the film also offers a slight departure from Sorkin’s typical misty-eyed institutional idealism. There is no question about the outcome of the trial—that the bad guys will win this courtroom battle. Whether this disillusionment is a reflection of the realities of the trial, which preceded the election of Richard Nixon in dealing a death knell to the counterculture movement, or of our current loss of faith in national politics, is impossible to tell.

The bad guys in this case are the United States government, led by prosecuting attorney Richard Schultz (Joseph Gordon-Levitt). The good guys are our defendants, the targets of a political trial meant to restore the “law and order” that Nixon promised: Tom Hayden (Eddie Redmayne), Rennie Davis (Alex Sharp), Jerry Rubin (Jeremy Strong), David Dellinger (John Carroll Lynch), Abbie Hoffman (Sacha Baron Cohen), Lee Weiner (Noah Robbins), and John Froines (Danny Flaherty). The defense is led by William Kunstler (Mark Rylance) and Leonard Weinglass (Ben Shenkman). These defendants are being charged with conspiracy to incite violence after the protests at the DNC turned to rioting. Of course, in an echo of modern politics, the violence began at the hands of overzealous police, removing badges and wielding tear gas.

However, the undeniable villain of the movie is Judge Julius Hoffman (Frank Langella), who weaponizes his gavel to achieve the trial outcome that he desperately wants. Hoffman’s lack of judicial impartiality is well-documented and Sorkin depicts the celebrated japes, horrific actions, and prevailing sense of disbelief that occurred in that infamous 1969 trial. Abbie Hoffman and Rubin arriving in black robes to deride the judge? Julius Hoffman’s decision to exclude the testimony of the previous attorney general? A bizarre sequence in which Hoffman repeatedly mispronounces Dellinger’s name? All included to varying degrees of effect.

Undoubtedly, the most famous and horrific scene concerns Bobby Seale (Yahya Abdul-Mateen II), the co-founder of the Black Panther movement and the original eighth defendant in the trial. The charges against Seale are ridiculously contrived—he was in Chicago for only four hours and absent during the turn to violence—and he has no lawyer to defend him. All of this irks Julius Hoffman and frustrates his political agenda, so he has Seale bound and gagged in the open courtroom. And there he sits, tied to his chair and rendered speechless, for all to see. It is difficult to imagine that this happened, but it did; and this image of blatantly monstrous racial humiliation is the lasting image of the trial, more so than the anti-war movement at its center. While it is true that Seale’s trial was severed from the other defendants shortly after this incident, it is a shame that Sorkin chooses to end Seale’s story here, leveraging his suffering but abandoning it before penetrating any deeper.

The real-life trial offered plenty of moments that stretch the bounds of reality and theatrics, so it is disappointing when Sorkin deviates from the documented history. The most glaring is the depiction of Shultz as a man conflicted by the ethics of prosecuting defendants he feels are innocent—a choice that contradicts legal documents showing him to be a bulldog in the trial. It is an unnecessary complication that purports a misplaced nostalgia the last several years have shown to be both outdated and untrue.

Where Sorkin truly succeeds is in depicting the fractures that ultimately spelled the demise of the counterculture movement. He reveals that the defendants are not just at odds with the government, but also with themselves. Tom Hayden believes that revolution lies in the vote and in the mastery of electoral politics; Abbie Hoffman favors cultural revolution. This discourse is still ongoing, and, while Sorkin has a personal penchant for political change, he is astute to grant that Abbie Hoffman’s views have merit.

Ultimately, it is difficult to overlook the near-excellence that the movie could have achieved in the hands of a more skillful director. Sorkin as a screenwriter is in a class of his own, but his directing chops are somewhat lacking. He is perfectly competent but never transcendent. His script—smart, incisive, occasionally daring—is often at odds with a directorial style that prefers musical swells and on-the-nose symbolism. Sorkin wants us to feel a certain way, and instead of letting us just feel that way, he instructs us to.

His directing is helped by standout performances, although Eddie Redmayne is uninspired as Tom Hayden and the accent work across the ensemble is somewhat lacking. Expect Mark Rylance and Frank Langella to garner Oscar nominations for their diametrically-opposed but similarly impassioned portrayals. Jeremy Strong is enjoyable as the perpetually-stoned Jerry Rubin, and John Carroll Lynch is strong as the upstanding pacifist caught in the crosshairs. But the true revelation is Sacha Baron Cohen as Abbie Hoffman. He combines a biting intelligence with a depth of humanity and fervor that grounds a character who could have otherwise bordered on caricature.

Discourse pulses through The Trial of the Chicago 7. It propels the movie during lagging moments but also makes it an exhausting watch. When the former attorney general tells the court that the “president is not a client of the attorney general,” the topicality of it nags at the current viewer. For a moment, it may inspire a flare of liberal righteousness but, more often, it strikes the viewer as a labored attempt to make clear the contemporaneous parallels. Ultimately, the hippies lost, the revolutionaries turned corporate, and the change that was promised was never quite delivered. Even Sorkin is beholden to this truth.