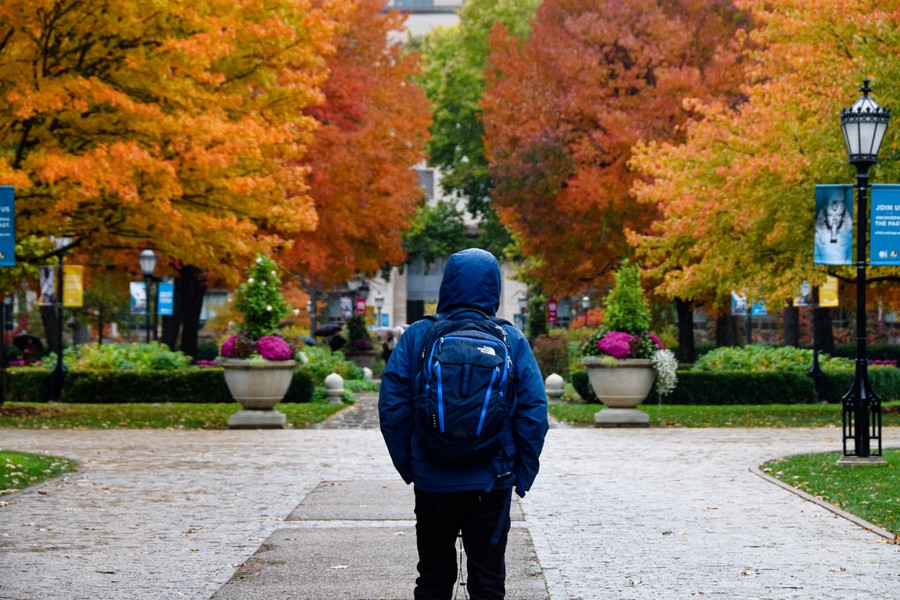 “Blue Can be a Fall Color Too:” Student clad in blue walks through the main quad on a rainy Fall day.

The University of Chicago reported 64 new cases of COVID-19 between November 13 and November 19, down slightly from last week’s 68 new cases. The new cases are associated with 51 close contacts, continuing last week’s trend in which each confirmed case had fewer than one close contact. The news comes as much of the University community prepares to depart Chicago for next week’s Thanksgiving break.

Cases in Chicago have been trending upwards and recently began to skyrocket, prompting Mayor Lori Lightfoot to implement a stay-at-home advisory last week, under which Chicagoans should only leave their homes to perform essential tasks like purchasing groceries or picking up medication.

This week’s UChicago Forward email reminded students to be mindful of COVID-19 regulations as they celebrate Thanksgiving. Students who leave Chicago for the holiday are discouraged from returning to campus until the beginning of winter quarter and students who vacate their on-campus housing will be barred from returning for ninth week and finals. The University has not released any plans for exit testing students.

“As recently noted by Dr. Emily Landon, maintaining a small bubble of household contacts is critical to helping flatten the COVID–19 curve while also enabling socializing within the bubble,” the email said. “The City of Chicago’s executive order also states that gatherings in private residences cannot exceed six non-household members.”

According to the email, UChicago is “asking anyone who does not follow the executive order and gathers with more than 6 people from outside your primary household during the Thanksgiving holiday to curtail your on-campus activity for one week following your gathering.” It is not clear how the University intends to enforce this measure.

The university also announced that surveillance testing will continue throughout the end of autumn quarter, despite next week’s Thanksgiving break and the cessation of in-person classes thereafter.

While lower than last week’s peak of 68 new cases, this week’s 64 new cases is higher than the average number of new reported cases, which has been 41.125 across eight weeks—speaking towards a broad trend towards an increase in COVID–19 cases in Chicago and nationwide.