Leading with Composure and Dedication, Resch Marks Her Fiftieth Year at UChicago 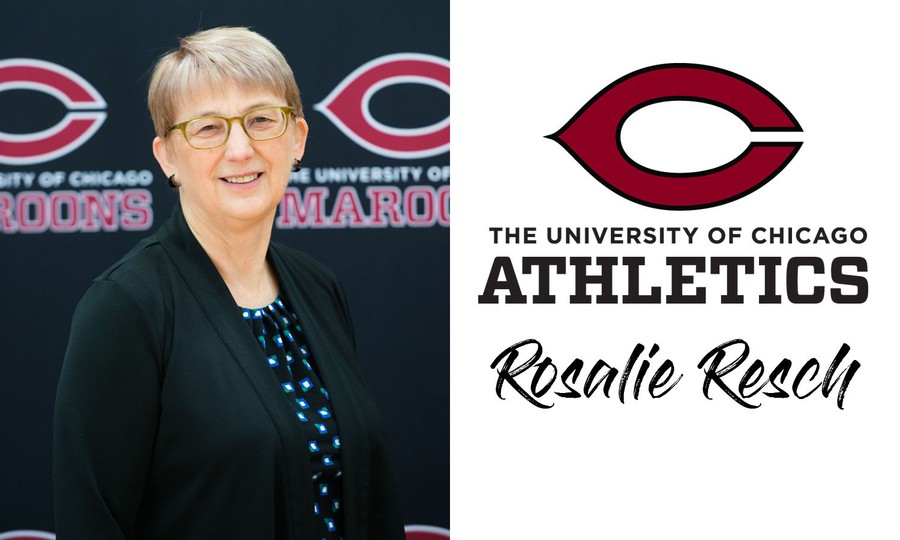 Rosalie Resch began her 50th year at UChicago this year.

The 2020–21 academic year will be one to remember for Rosalie Resch, who marks her 50th year of association with the University this year. Currently serving as the Interim Director of Athletics and Recreation, Resch manages the University’s varsity athletics, intramural sports, and athletic facilities. Ultimately, Resch’s journey to her present position has a familiar beginning: it all started when she arrived at UChicago as a student.

As a first-generation college student, Resch said that coming to UChicago was “about as accidental and life-changing as I possibly could have imagined.” Nevertheless, Resch’s accomplishments as a varsity student-athlete were no accident. She graduated with a bachelor’s degree in Russian Language and Literature in 1973 and played softball, volleyball, and badminton for the University. Excelling both on the field and in the classroom, Resch even set a school record with her .481 career softball batting average. Looking back on her time as a student-athlete, Resch maintains that “the athletic experience was absolutely critical to me as a first-generation college student. The athletic community provided me with support that made the hard times a whole lot easier.”

Following her athletic career, Resch coached the University’s volleyball team from 1977–97 and again set a school record with 263 career victories. She left coaching when the planning process for the Gerald Ratner Athletic Center began. Resch was very involved with architects and builders to construct the intricate Athletic Center, which opened to the public in the fall of 2003.

Resch noted that one of the keys to her long tenure at UChicago is that she has never “had two years in a row that were the same.” Indeed, over the years, Resch has played crucial roles both inside and outside of the University community. She has served as the Director of Intramural and Club Sports, an elected member of the College Council and the University Senate, and a member of the Undergraduate Discipline Committee. Aside from these roles, Resch has also been a part of various NCAA committees. She was named to the NCAA Division III Management Council, the DIII Championship Committee, the Strategic Planning Subcommittee, the Playing and Practice Seasons Subcommittee, the Working Group on Life Balance issues, as the Chair of the Academic Issues Subcommittee, the NCAA Postgraduate Scholarship National Selection Committee, the NCAA Technology Group.

Over time, Resch has played an instrumental role in developing the University’s athletic program. At the heart of her motivation to continue on throughout the years is her commitment to her athletes. She said, “The main reason I’ve stayed is because of the students.” This commitment is especially seen through the charismatic relationships that she builds with student-athletes. Pursuant to her vision, Resch seeks to create a student-athlete experience that allows students to flourish both on the field and in the classroom. She adds, “I really believe that what we do here is the right way to do intercollegiate athletics. The way our coaches think about the athletic experience is the right way [to think about] the balance between academics and athletics.”

Resch has taken over the position of Interim Athletic Director in what is likely the most challenging time in collegiate sports history. Forced into a quick response to a pandemic that is constantly evolving, Resch worked diligently over the summer to plan for the return of fall athletes and the reopening of the Ratner Athletic Center. She notes that staying “responsive to the changing environment has been challenging because we want to make sure that all of our decisions are driven by our students’ health and safety.” Accordingly, in navigating the pandemic’s nuances, the athletic department has modified key elements of its environment, such as by spreading out workout equipment and creating an elaborate reservation system at Ratner. As she sees the 2020–21 year through the lens of a former student-athlete, Resch has a message for current athletes who have been forced to deal with an unpredictable and modified sporting environment. She hopes that student-athletes “know that they have had advocates at every level of the university. All of us have done whatever we can do to provide the best possible experience this year.”

Throughout the last few months, Resch has led the athletic community with incredible composure and dedication. Her ability to make decisions in the best interest of students’ health and safety while also creating a meaningful athletic experience like that which she enjoyed as a student-athlete has been both thoughtful and thorough. Reflecting on her vast experience from entering the college as a student to now leading the Athletic Department, Resch said, “50 years of my life have been here. It was a pretty good accident.”