Washington’s Bullet Wounds Have Not Healed 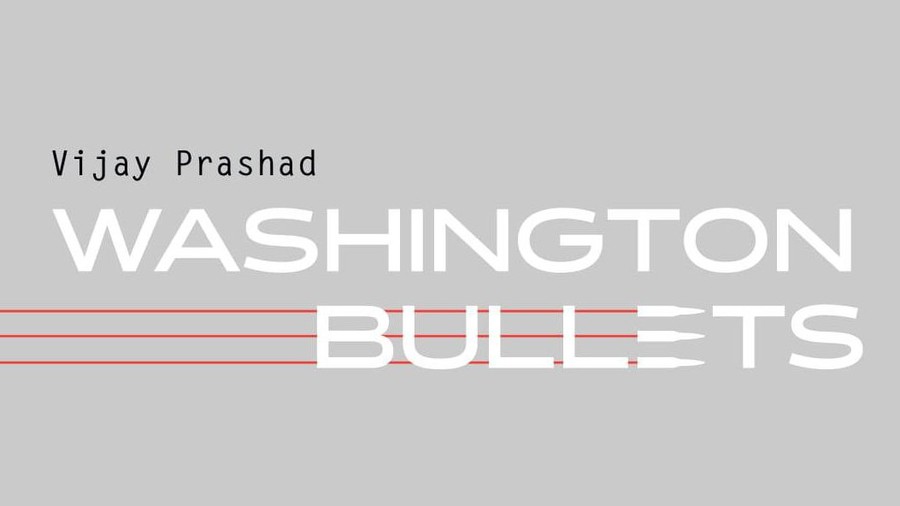 In author Vijay Prashad's own words, "Washington Bullets" was written for “young militants, because we [young activists] need armor” and “cannot afford to get amnesia” of the history of past repression.

In an era of coups, crisis, and international chaos, Vijay Prashad (Ph.D. ’94) critically examines the history of international interventions on behalf of the U.S. capital in his latest work, Washington Bullets. The author of several historical works, including The Darker Nations, The Poorer Nations, and The Karma of Brown Folk, Prashad expands his canon of histories with this collection of essays. In his own words, this book was written for “young militants, because we [young activists] need armor” and “cannot afford to get amnesia” of the history of past repression.

Inspired by the Bolivian coup and subsequent political crisis in 2019, Prashad noticed striking similarities to the overthrow of former Guatemalan president Jacobo Árbenz in 1954. He then decided to “write a hundred-page book that will tell the whole story that will indict the CIA from its founding to the present!” After frantically writing, Prashad requested the former president Evo Morales, who was in Argentina at the time, to write the foreword of this manuscript.

The foreword is a short, bitter letter. Former president Morales was powerless as the Movement for Socialism (MAS)—his life’s project—faced massacre after massacre. The large-scale enterprises his party had planned before the coup were completely dismantled. Nevertheless, the foreword ends with hope:

“It is likely that the world that will emerge from the convulsions of 2020 will not be the one that the one that we used to know…We must work together towards a world in which greater respect for the people and for Mother Earth is possible…We have the conviction that we are the masses. And that the masses, over time, will win.”

This optimism characterizes the progression of the rest of the book. Dark, bitter, and powerful, Prashad critically examines the history of imperialist-backed bloodshed across the world. The cost of a bullet is the central question of the first essay: What is the cost of killing a figure who stood for hope and leadership to the poor? What motivated this figure’s murder? And how did this figure’s death permanently shape the landscape of the country? The answers to these questions have implications significant to the history of numerous countries, from Indonesia to Congo, from Burkina Faso to Guatemala, and many more.

For all politically minded individuals, the second essay is the most informative—a literal how-to manual for regime change. Prashad lays out nine steps honed from practice, ranging from first attempting to bolster domestic support all the way to “making the economy scream” through sanctions and diplomatic isolation, and finally, assassinations. However, the coup attempts do not stop at assassinations. As described by Prashad, “theories of society which attempted to understand the social mechanisms of war and unemployment could be softly dismissed as merely conspiracy theories.” The erasure of the crime of a coup—denial of its existence—is the final stage of the crime.

The remaining essays examine how the themes of the first two essays reflect upon dozens of post–World War II examples. Contemporary countries that face hostility with the United States are analyzed under this framework, concluding with an explanation as to how these same processes are ongoing today.

Washington Bullets, despite the brutality of the title, is a work about hope, and about change. It is a collection of essays that highlight the power of the masses. It is a book written about visionaries and villains, manipulators and martyrs, as well as the billions of people who dared to fight for justice and paid the ultimate price for it. Meticulously well-cited from publicly available CIA documents, Prashad writes with a polemical and passionate tone. Despite its inherent bleakness, this work is for everyone. At times, the history presented in Washington Bullets can feel desperate and hopeless. Nevertheless, it is essential for understanding the international status quo, recognizing the identical cycles repeating themselves in current events, and learning how to resist them.