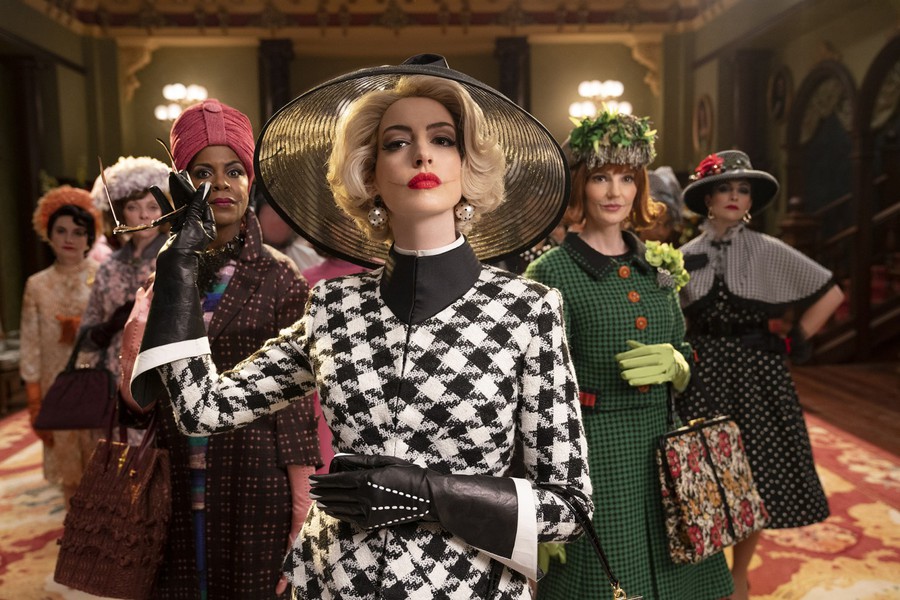 When [Anne Hathaway] snarls at the mice/children she is so desperate to kill, you’re reminded of the fear that made "The Witches" so fun to read as a child.

There’s a certain kind of movie one expects to see when the title is X’s Y. To watch Mary Shelley’s Frankenstein or Bram Stoker’s Dracula is to watch a studiously faithful adaptation of the source material, barely straying from the original author’s vision. Roald Dahl’s The Witches, the new film from Robert Zemeckis, is not that adaptation.

The story is familiar to anyone who read the book growing up: A young boy is orphaned in a car crash and taken in by his grandmother. She reveals that witches are real, disgusting creatures hellbent on destroying children. When the grandmother falls ill, the duo travels to a hotel that happens to be hosting an international convention of witches. The boy is turned into a mouse by these despicable beings, but he, his grandmother, and some new friends manage to turn the witches themselves into mice. The book wraps up with the gang dedicating their lives to eradicating the world’s remaining witches.

All this is unchanged. The part that the adaptation plays with, fast and loose, is the setting. Dahl’s original book took place in his native England. Zemeckis’ movie is set in the southernmost portion of Alabama, seemingly for no other reason than to fill the dialogue with more folksy sayings than you can shake a stick at. Such a change is no inherent sin, but the choice never seems right. This new setting feels like forcing a puzzle piece into a spot it doesn’t go—a self-made problem that could be fixed with little effort.

None of this is to say Witches is a bad movie, but it’s not a particularly good one and is often saved only by the efforts of its cast. The perpetually underrated Octavia Spencer anchors the ensemble as Grandma, giving some element of life to a character that must have been dead on the page. Jahzir Kadeem Bruno forms the other half of our star duo—he is credited as Hero Boy—while Chris Rock bookends the film as an older, grizzled version of Hero Boy. Any review has to also mention Stanley Tucci, who plays the hotel manager with an accent oddly reminiscent of Frank Underwood.

This would be a fine ensemble for a forgettable adaptation, but there is one actor who merits special mention. It takes nearly half an hour for Anne Hathaway to show up in earnest, but it is worth the wait. Hathaway is two things in this movie: A) the Grand High Witch, the big baddie of the picture and B) having the time of her life. The supreme campiness of Hathaway’s performance, the highlight of which is an exuberant Norwegian (?) accent, gives this movie a much-needed burst of life. Perhaps most importantly, she is, at times, genuinely creepy. Zemeckis has largely retained the distinguishing features of Dahl’s witches—clunky square feet with no toes, sickening rashes from wigs they must wear to hide their baldness—but has added a wide, sickening smile with razor-sharp teeth. When Hathaway snarls at the mice/children she is so desperate to kill, you’re reminded of the fear that made The Witches so fun to read as a child.

Indeed, Witches suffers most in comparison to its source material. Dahl’s book was one of my favorites growing up, full of unnerving imagery and eerie charm. By and large, this adaptation lacks those qualities. Instead of the shiver-inducing claws that Dahl provided his witches with, Zemeckis gives us hands missing the two middle fingers (an issue that has inspired objections from many in the disabled community). Rather than face the everyday threats to mice, including a cleaver-wielding chef, Hero Boy, and his compatriots sneak around with almost no issue. Do these differences make that great an impact on the picture? Of course not, but I still found myself missing the book.

All in all, Roald Dahl’s The Witches is a fine movie. We could nitpick for a while more (Why does the Grand High Witch still have her middle toes when all the other witches have zero? How did Grandma get to Chicago so quickly from Alabama? Why are all these children listening to orders from an old talking mouse?) but it doesn’t really matter at the end of the day. This is a kid’s movie, designed to take up an hour and 46 minutes. As long as the book is around, however, there’s no real need for it to exist.

Roald Dahl’s The Witches is currently streaming on HBO Max.