UChicago students who interned in Iowa for various Democratic presidential candidates spoke on what drew them to who they worked for, how they feel about Biden’s candidacy, and their thoughts on the election. 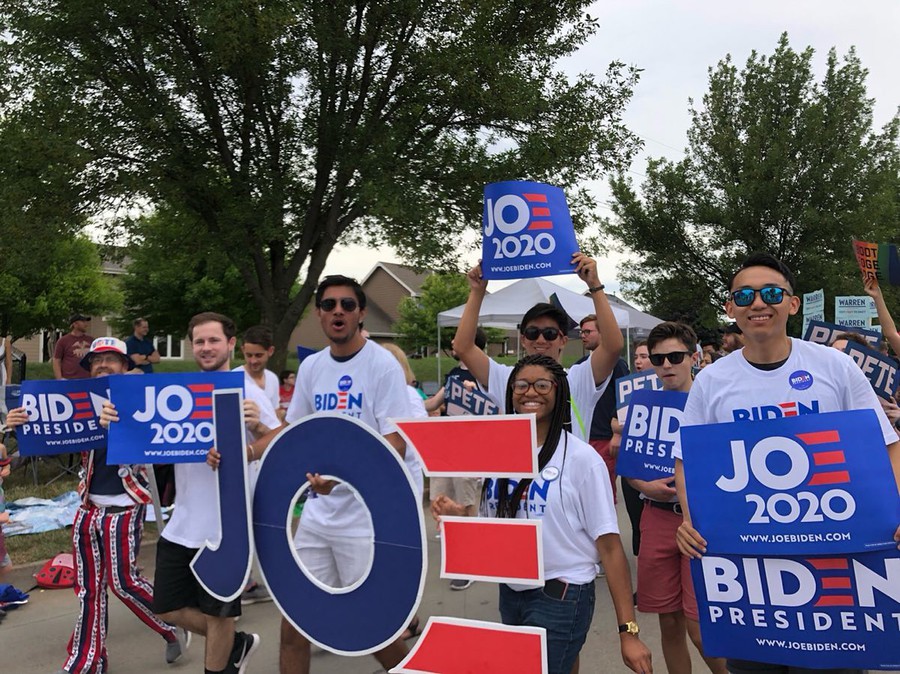 Third-year Cassandra Crevecoeur, standing behind the "E" in Joe, marches with the Biden campaign.

Back in the summer of 2019, several UChicago students traveled to Iowa with the Institute of Politics’s Iowa Project to work on Democratic campaigns for the 2020 primaries. Now, with Joe Biden as the Democratic nominee, The Maroon checked in with student campaign interns on their feelings about Tuesday’s election and how the political arena has changed since they were in Iowa.

Third-year Zander Arnao was one of these interns. He chose to work on the Pete Buttigieg campaign because he agreed with Buttigieg’s vision for the country, his prioritization of institutional reform, and generational change, and notably, Arnao liked Buttigieg’s youth.

At the time, he didn’t consider Joe Biden. “I felt like Biden was a relic of an older time, like an older view of institutions and bipartisanship that didn’t really jive with where I was at,” Arnao said. He felt as though Biden was too moderate and that Buttigieg was a better messenger for a less moderate vision that contained a lot of dynamic and truly progressive elements.

Arnao recalls that while working at events in Iowa, he would often see organizers for Warren and Sanders. However, he seldom saw any for Biden, whose light presence made him seem like a “non-factor.” He thought Biden wasn’t going to be prominent in the race. But when Buttigieg dropped out of the race, Arnao ended up voting for Biden instead of Sanders in his state’s primary. He didn’t think a “democratic socialist could win over independent voters in certain swing states very successfully.”

Arnao believes that Joe Biden is a good choice for the Democratic Party because he’s “palatable to many people and people trust him to be an effective leader of the state.” Arnao notes this is a characteristic that is essential in an election occurring in a pandemic. He says that if Sanders or any other candidate that is perceived as radical were the nominee, it wouldn’t be good for Democrats, as it would be difficult to convince people of radicalism during a crisis.

Third-year Michael Ryter, who worked on the Warren campaign during the Democratic primaries, also agrees with the party’s decision to congregate around Biden, though Biden wasn’t his first choice. Though Ryter said he initially wanted a candidate with more progressive values, he’s now excited about the prospect of a Biden-Harris administration. “It's really important that Democrats be unified against the Trump-Pence administration and all the dangers it poses to our country,” Ryter said.

Third-year Cassandra Crevecoeur supported Biden since the primaries and worked on his campaign in Iowa. “I thought he was the best middleman candidate who is tolerable for enough Democrats, but also a good foil on Donald Trump,” she said.

The first state Biden won was South Carolina, in February. Crevecoeur recalls feeling “goosebumps.” She was worried about his performance in later states, but as he kept winning, “I was like, this is really, really cool. This is my candidate.”

Crevecoeur thinks Biden has a good chance at beating Donald Trump in the general election, though she acknowledges that his victory is far from guaranteed. “There are so many other factors now, especially with COVID, that I don't want to let myself only think that he's going to win. A lot can change in a presidential election," she said.