By Finn Hartnett   and Caroline Kubzansky 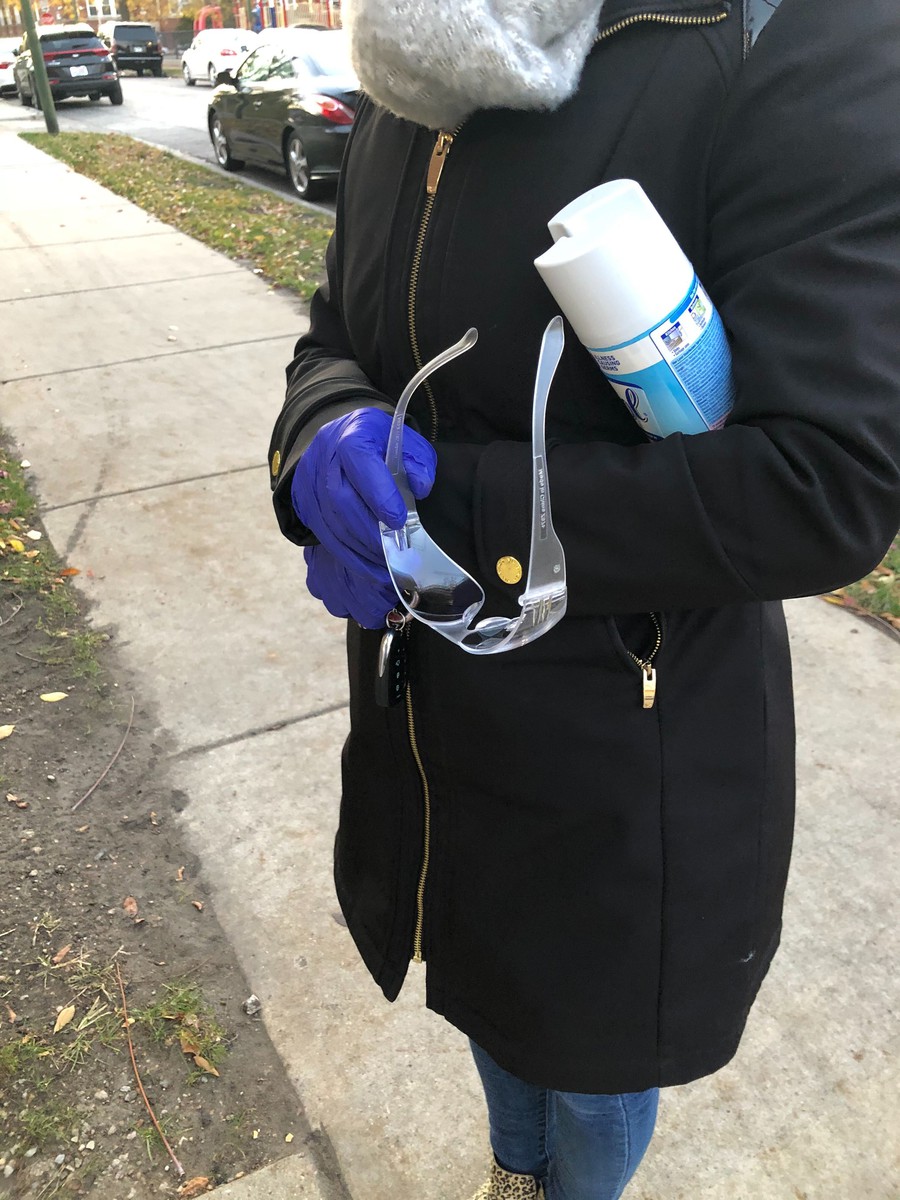 A voter at Cornerstone Baptist Church came armed with gloves, goggles, and Lysol spray to stay safe while casting her ballot.

Hyde Park and Woodlawn residents of every political stripe went to polling places to vote on Election Day despite the COVID-19 pandemic.

In masks and socially distanced lines, voters told The Maroon about what motivated them to cast their ballots this year, listing everything from police reform to the pandemic to religious liberty. While many saw the election as an opportunity to express their displeasure with the Donald Trump administration, a handful cast their ballots in support of the president. Almost as many brought gloves to wear in the polling station, and one voter came equipped with Lysol spray, wipes, and a pair of goggles.

Outside of Cornerstone Baptist Church in Woodlawn, a polling location, opinions were divided.

Asked what was most important to him in casting his ballot, pastor Courtney Lewis, who leads the church’s congregation on Sundays, replied, “Life. I am fiercely pro-life. Liberty. The Second Amendment.”

He fears that much of what he values will be at risk if the Democrats take back the White House.

Monique Arnold, a UChicago desk clerk lead, arrived at the same polling place before her 7 a.m. work shift. She also took a dim view of the Democratic candidates, and noted that Joe Biden has been in the public eye for 47 years but has not demonstrated commitment to his ambitious platform which includes building on the Affordable Care Act, tackling racial inequity, and taking action on climate change.

“He’s been in office for 47 years, and what has he really done?” Arnold asked. “If he wants to do all these things he should have done them with Barack [Obama], as a VP and before then. I’d rather deal with someone who shows who they are, then someone who [doesn’t] show who they are.”

Amy Aschliman, a 34-year-old pastor at Chicago Theological Seminary, turned out to vote for Joe Biden at Ray Elementary. Aschliman finds Trump revolting: She sees a vote for Biden as a vote against Trump.

“Trump is an evil person,” she told The Maroon. “And lots of things are at stake. And even though I'm not that excited about Biden, nothing's better.”

Aschliman chose to cast her ballot in person due to logistical problems and time constraints requesting an absentee ballot.

“Every time I went to register online, I just didn't have my ID with me, or [I was] procrastinating,” she said.

Tasha Brown-Smith and Emaya Ginn, a mother and daughter, also came to vote in person because of scheduling concerns, and shared Aschliman’s lukewarm attitude toward Biden.

“At this point in the game, you really don't know who to trust,” Emaya said.

However, she said that Biden’s time in office made him a better candidate than Trump, who she said had degraded the office of the presidency.

“It’d be better having somebody experienced as opposed to somebody who is just trying to have a power struggle, publicity stunt type of situation,” she said.

But the mother-daughter pair was also excited to vote for an administration that they thought would provide “momentum” to the causes of racial equity, policing, and ending the pandemic.

Many voters who spoke to The Maroon said they voted because of their conviction that voting was just the right thing to do.

For UChicago third-year Daniel Kramer, it was his first time voting in a presidential election.

“It's tough to look at one vote like it matters,” Kramer said. “But...it does, and it’s nice to feel like it does.”

Other voters, especially younger ones like second-year Cade Bruce, said friends and family members convinced them to vote.

“It was really my mom calling me and being excited about voting and stuff,” Bruce said.

Analis Figueroa, 19, said her friends had pushed her to go to the polls and to vote for Democratic candidates. Figueroa herself, though, felt unenthusiastic about the process and uninformed, by her own assessment, about the choices she was making.

“I don't know much about politics and all that,” she said. “I just came because [my friends] told me to. I don't know what any of this shit is. I want to be done.”

“I'm glad that I voted, though,” she added. “I mean, I know it's important. I definitely do not want Trump as a president.”

Kramer said that although he was glad that he had voted, he remained apprehensive about potential complications in determining the election’s outcome. Due to expected delays for counting mail-in ballots and other issues associated with the pandemic, pundits and political operatives have speculated that the result of the election may not be clear for weeks following Election Day.

“I mean, it feels good to have voted, but I'm still nervous,” he said. “I don't know if we're gonna know the outcome tonight or tomorrow. But it's definitely not over, and I'm still nervous to see what happens.”